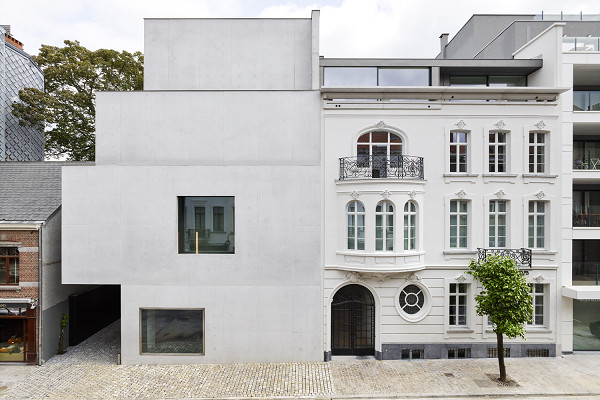 Xavier Hufkens – a leading contemporary art gallery in Europe – will reopen its Sint-Jorisstraat gallery in Brussels on Thursday, June 2, 2022, following a spatial reformulation of the existing flagship gallery with an important new extension. The design by Robbrecht en Daem architecten holds a special connection to the building’s history. Thirty years ago, the collaboration between Xavier Hufkens and the architects Robbrecht en Daem and Marie-José van Hee began. This story is now continuing in a fundamental architectural reinterpretation of the gallery. In 1992, the architects had already signed for the conversion of the existing classical mansion into a gallery. Three decades later, Hufkens still looks at that realization as the place where artists markedly like to come and continue to come, and where an audience has formed in harmony with the art place. The functioning of the building has proven to be coherent and meaningful over the years, but now a moment has come when a powerful new spatial proposition presents itself. The task set by the gallery owner and the designers is directed towards the future.
“How can we make a meaningful place for art in the city of Brussels that can contain the contemporary essence of artistic expression.” Scale, light and proportion are the guiding concepts.
The new building is a monolithic figure, a seemingly simple stack of concrete volumes, which connects to the existing ‘maison de maître’. There is both an architectural dialogue and a confrontation. The entire design fosters a close connection between the existing and the new. The floor levels are aligned so that a 'promenade architecturale' can run through both parts of the building. The interaction between the new building and the existing building creates a Pleiades of different spaces with museum-like proportions in the new building and room-like dimensions in the mansion. This multiplicity of scales corresponds to the multiplicity of manifestations in art, from a monumental painting, a sculpture or an installation to the intimacy of a print. The cascading stacked structure of the new architecture creates zenithal light openings on each floor, giving each room its own identity. A variety of light incidence creates a wide range of experiences. Art always relates to this in a new way.
The Sint-Jorisstraat façade manifests itself as a stele with a 'one-eyed opening', which in its expression of emptiness symbolizes 'all art'. The absence of a multitude of windows captures the essence of the building: let the façade, with that one window be an expression of 'nothingness', a symbolically free canvas or face, to be filled in by all possible artists who will exhibit in this gallery. The other element – ​​the idea of ​​disconnection – is implied in how the building’s side wall completely detaches itself from the neighbouring building and creates a transition – a pronaos – between street and garden, between outside and inside. Entering the new gallery is an immediate confrontation with art. The new building represents an exceptional increase in scale for the gallery: in terms of space, physical capacity, logistical options and possibilities within the gallery's portfolio. A stone staircase guides visitors to the lower gallery as well as to the art spaces above, eventually leading to the upper exhibition space with a central skylight. This succession of art spaces is experienced as an infinity. Throughout this route, workplaces have been installed to accommodate the intense activity of the gallery and stimulate both the underlying communication and engagement with visitors. The building's durability is expressed in its materiality, the use of geothermal energy and concrete core activation, and the capture of solar energy. With its spatial status, the Hufkens gallery wishes to be a real place of encounters, between people and art.
Tags
Art Heritage Museum Extension Natural Daylight Historical City
Client
Xavier Hufkens nv
Architects
Robbrecht en Daem architecten bv
Program
Expansion and refurbishment of contemporary art gallery
Location
Brussels, Belgium
Date
2017–2022
Status
Completed
Floor Area
2.215 m2
Team
Paul Robbrecht, Hilde Daem, Johannes Robbrecht, Kim Poorters, Valérie Van Roy, Florence Himpe, Lara Kinds
Interior Architect
Robbrecht en Daem architecten bv, François Marcq nv (executive and sales spaces)
Project Manager
Julien Ridremont (Arcoteam bvba)
Structural Engineering
BAS bvba (Dirk Jaspaert)
Services Engineering
Cenergie nv
Landscape
Wirtz International Landscape Architects nv
Contractor
Jos Reynders Décor nv
Transport & Mobility
Agora nv
Security
Eveka bvba
Sustainability
Cenergie nv
Lighting
SiSi (Siegrid Siderius)
3D / Rendering / Visuals
Robbrecht en Daem architecten bv & G2 Architectural Graphics bvba
Photography
Kristien Daem 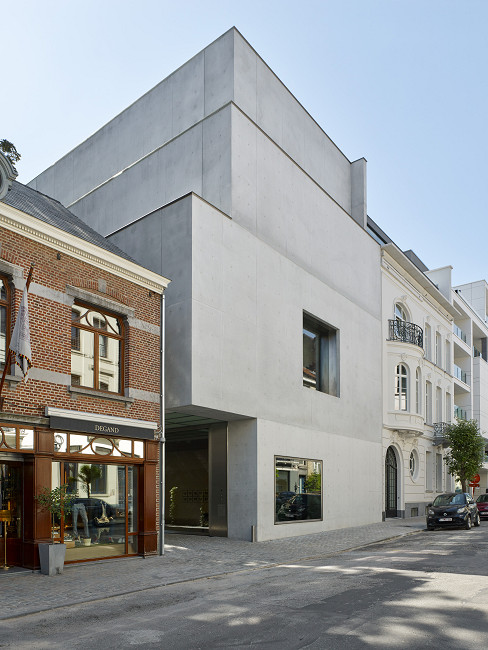 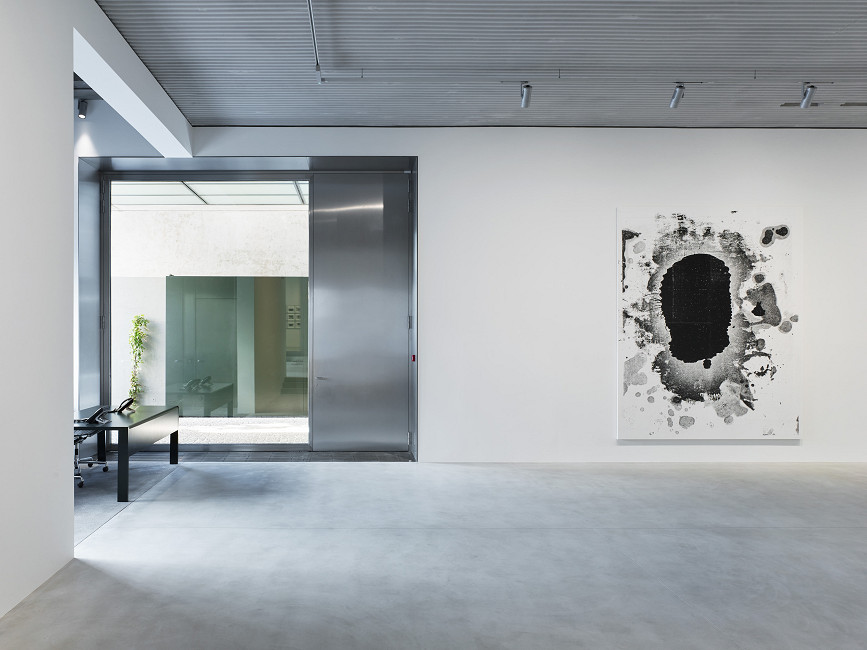 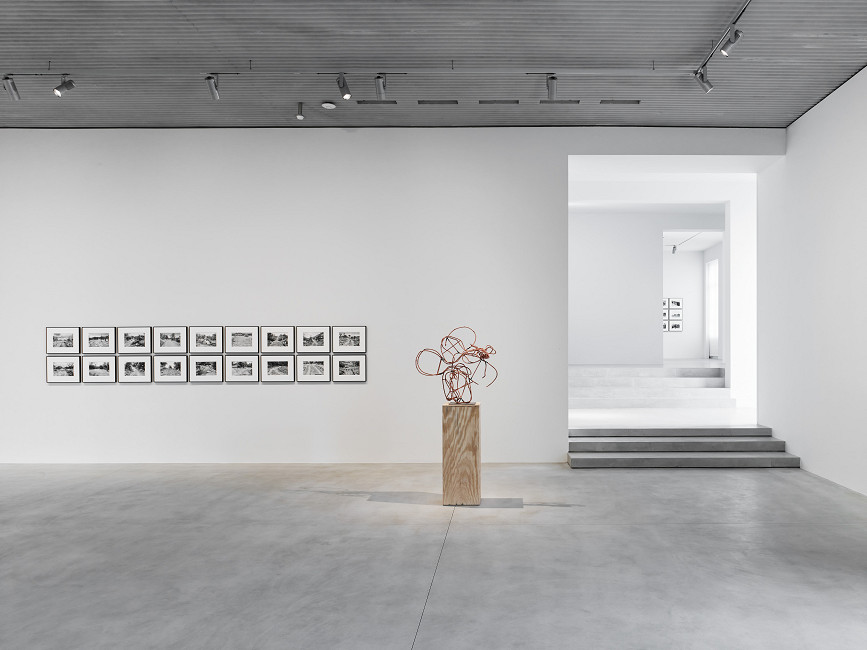 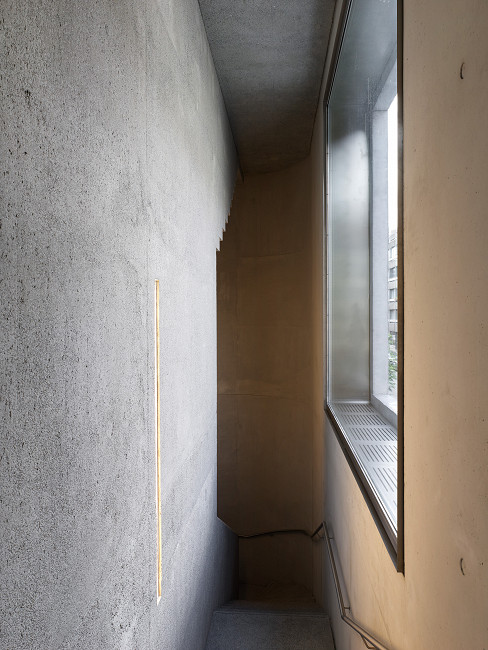 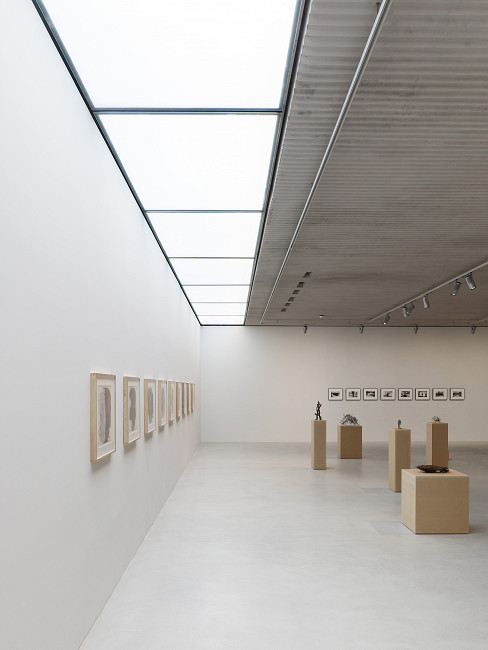 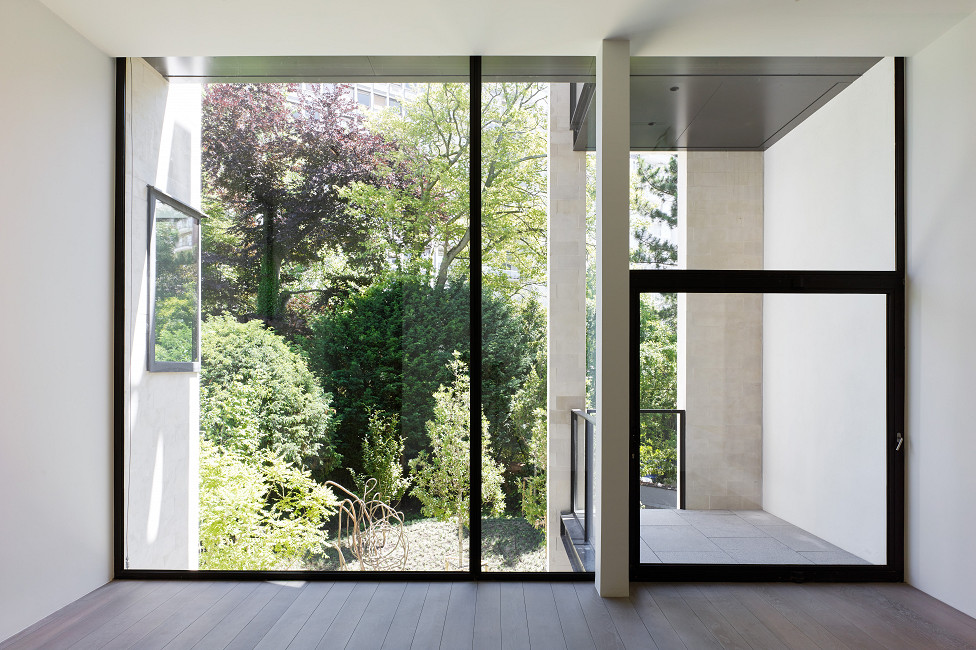 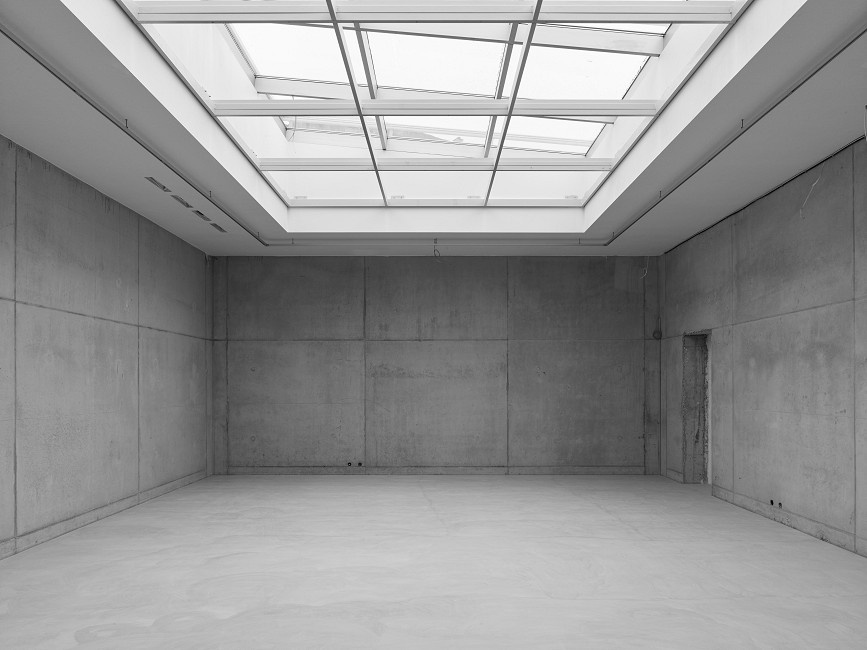 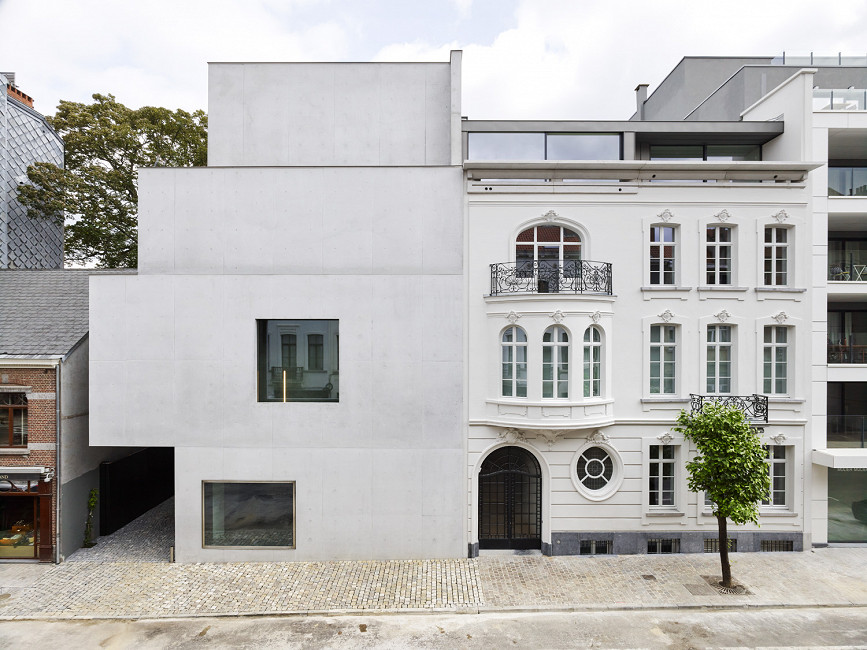 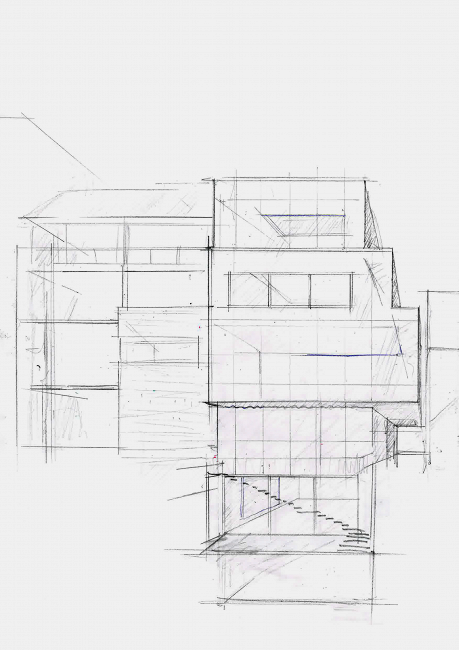 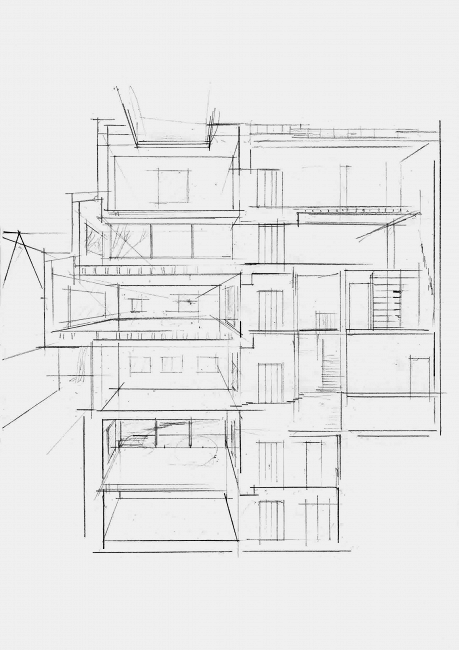 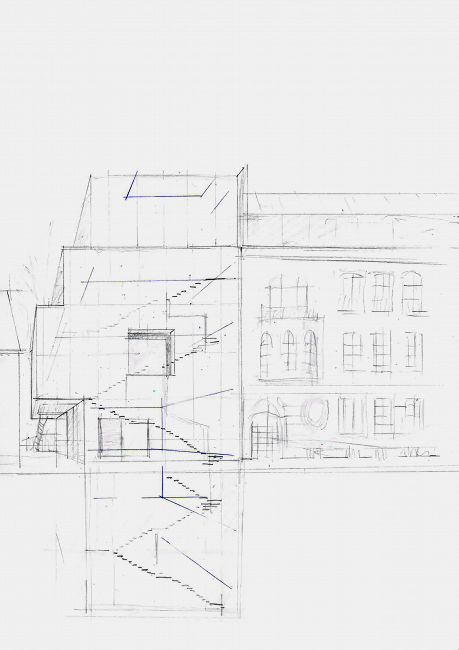 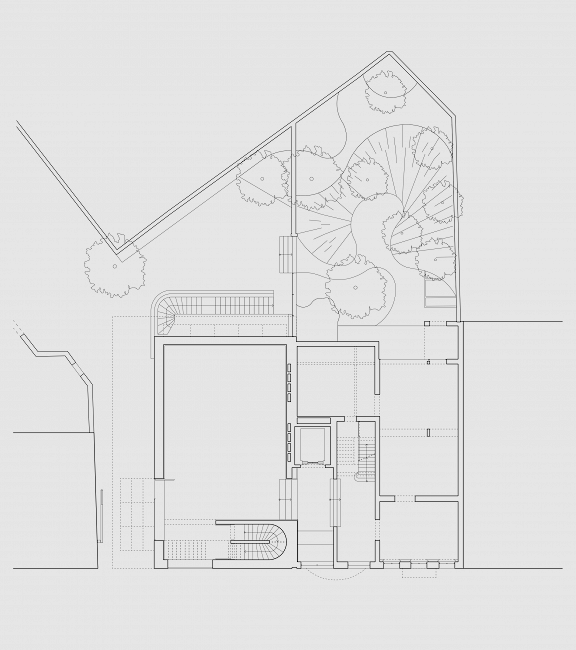 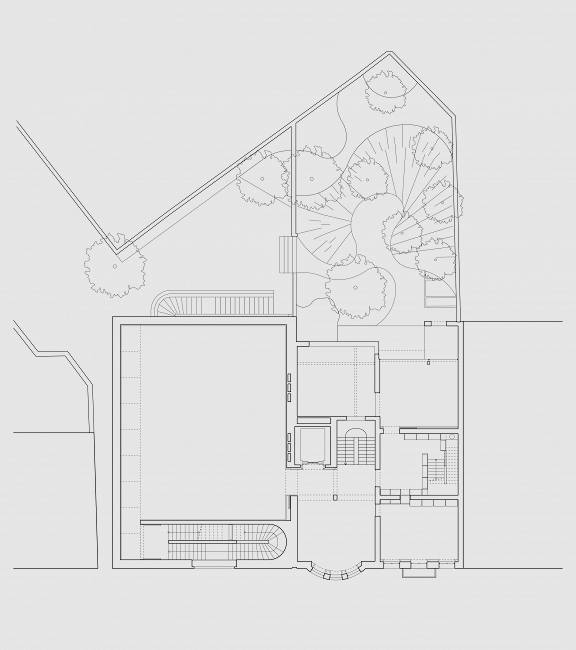 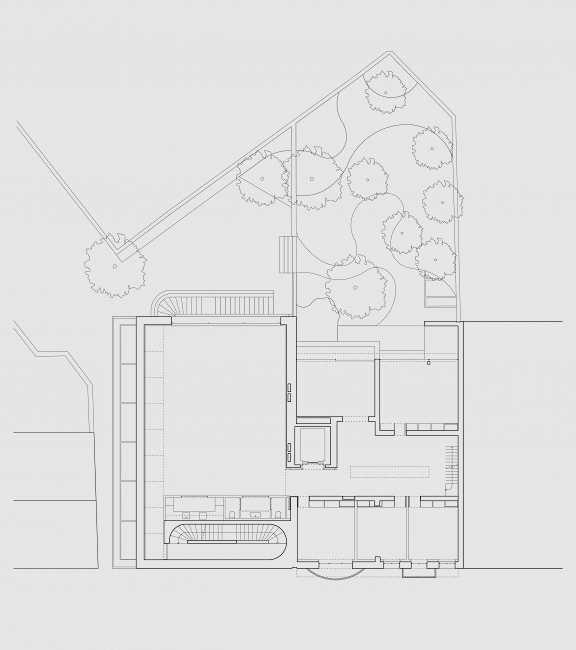 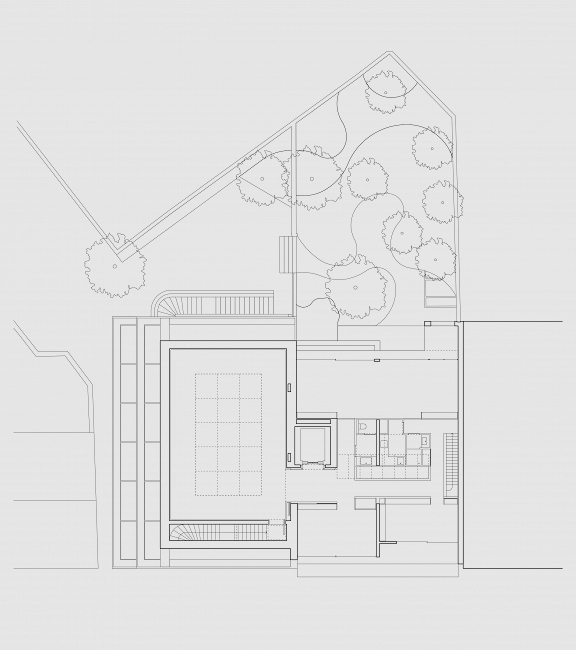 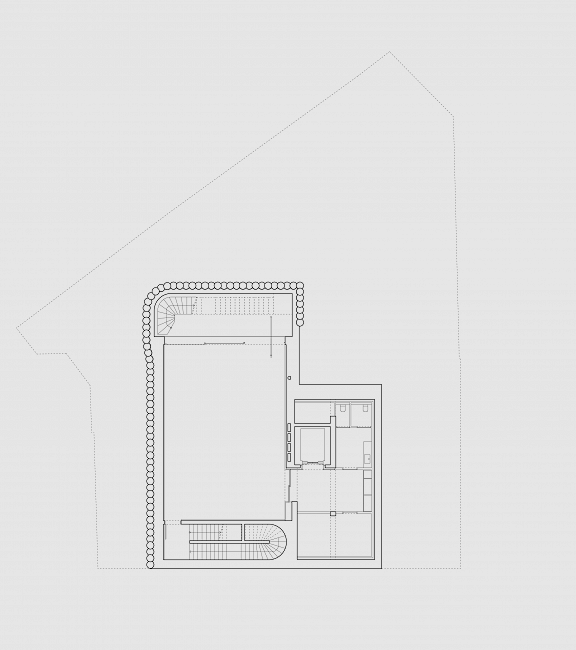 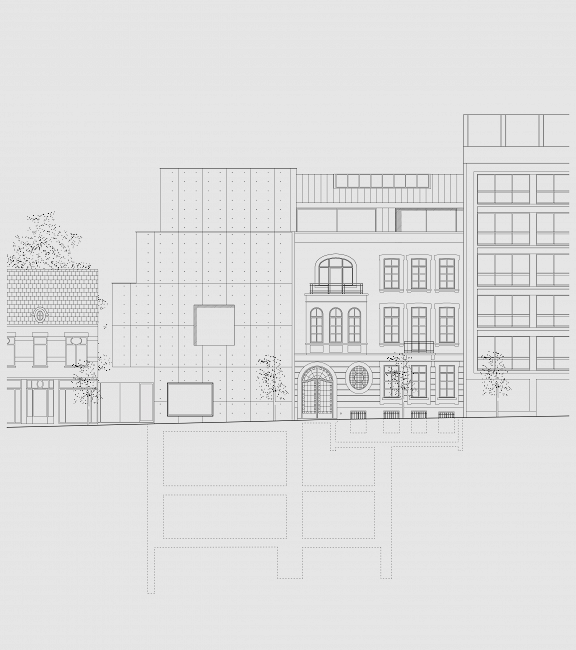 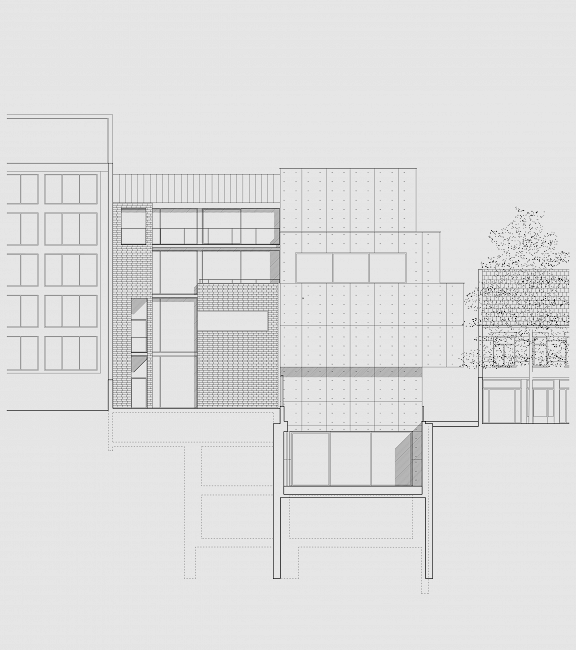 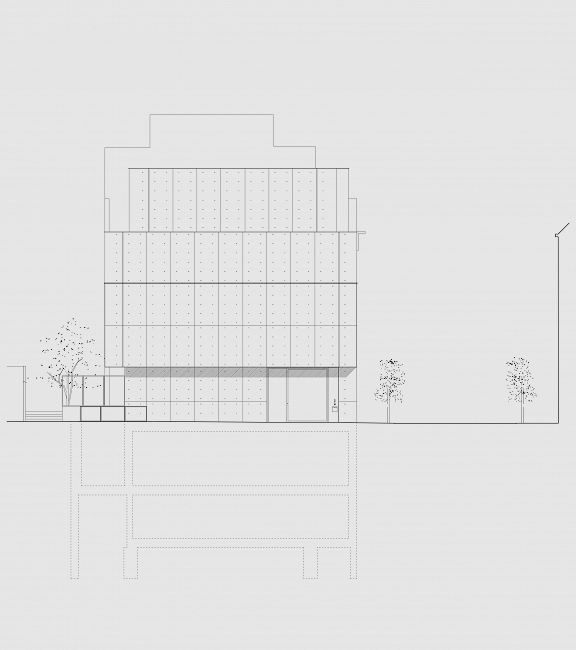 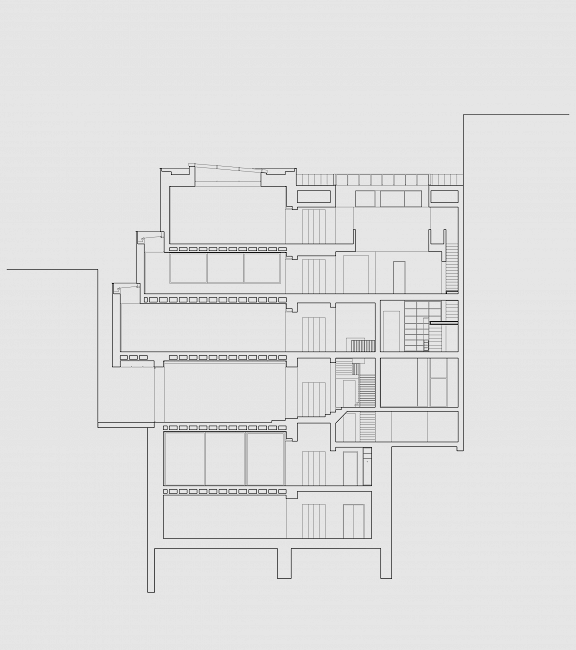 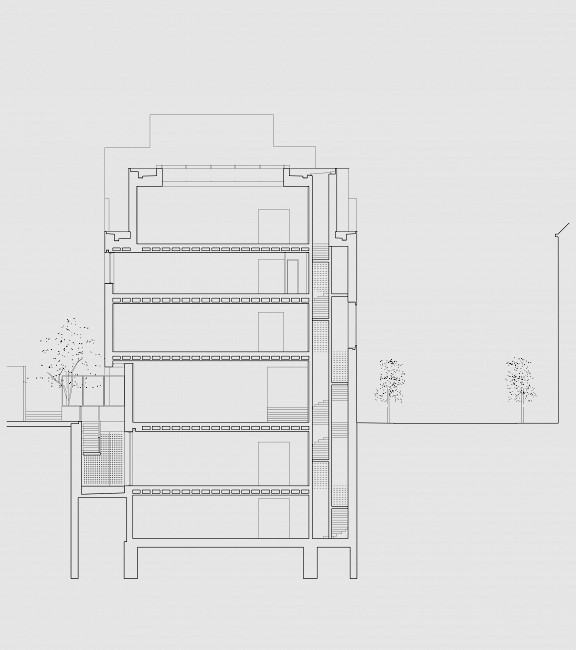 Concert Hall
Bruges, Belgium
1998–2002
On ‘t Zand, an open urban space near the station in Bruges, Robbrecht and Daem built a concert hall for Bruges when it was the Cultural Capital of Europe in 2002. Alongside the Halletoren, the Church of Our Lady and St Salvator’s Cathedral, this ‘Concertgebouw’ has become a landmark when driving into the city. A uniform external cladding in terracotta tiles hangs like dignified drapery over the volumes of the concert hall, fly tower and... Read more
Whitechapel Gallery
London, United Kingdom
2003–2009
In the best museums and galleries one finds one's way through a series of rooms, where the artefacts are carefully lit and set off by calm backgrounds. A degree of repetition helps navigation, some variation helps orientation.The proposals for the Whitechapel Art Gallery are bold in their restraint (someone commented: 'where’s the architecture?') and seize a simple but powerful opportunity: lower and upper floors are configured as circuits of... Read more
Furniture KMSKA
Antwerp, Belgium
2007–2008
Refurbishment of the entrance hall and auditorium in the Royal Museum for Fine Arts Antwerp (KMSKA). This included the reception desk, benches, signalisation in the entrance hall, lectern, speaker’s desk and the separation wall in the auditorium.... Read more
Documenta IX, Aue Pavilions
Kassel, Germany
1992
The Aue pavilions were temporarily built for the hundred days of Documenta IX in Kassel and formed one of the components housing the contemporary art exhibitions. Visited by six hundred thousand people, the pavilions showcased the work of twenty-eight artists. The Building was situated in the extensive baroque park of Friedrichs' Aue's. This park lies sixteen metres below the nearby Friedrichsplatz from where one could look down on the pavilions... Read more
Het Huis
Antwerp, Belgium
2010–2012
On top of a polished concrete base raised slightly off the ground, a light, gleaming, green-painted steel construction unfolds to form a shelter to protect delicate works of art. The diagonal lines of passage through this new pavilion interweave Middelheim Park with the Hortifloria Garden, a recent extension of this well-known Antwerp sculpture park. Four vertical recesses provide the entrances to the pavilion, divide the space into four and... Read more
Close
Filter by type
Filter by status
Filter by category
Filter by tag