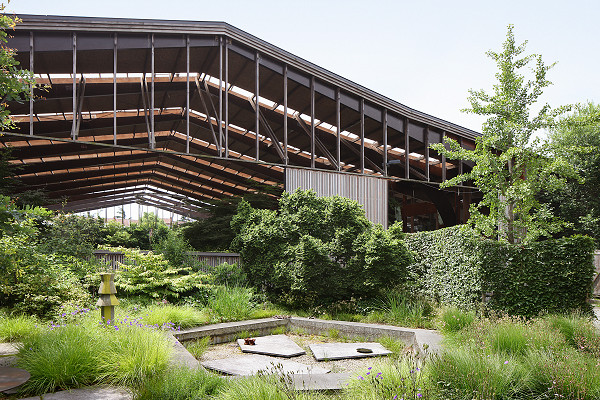 In a working class neigbourhood of Ghent, against the backdrop of nearby blocks of high-rise flats, Robbrecht en Daem converted an existing timber yard into new architectural studios. The roof of the shed, built by the wood construction company De Coene in the early seventies, was partially dismantled. What used to be the work floor has become an outdoor space that accommodates an arboretum fringed with wild grasses, a swimming pool, bicycle parking and a large open area for performances and exhibitions. It is a ‘playground’ for artist friends, for partying or resting. Described as a ‘modern “ruin”’ (by Dieter De Clercq, 2010), this open area is ‘a coarse filter between the offices and its immediate surroundings’.
The ground floor consists of meeting rooms, the model workshop, the kitchen and dining room; the generous office spaces - entirely in wood - are on the upper floor. They are tucked under the beams to one side, overlooking the yard. Here, ‘rooms’ are defined in a flexible manner by shoulder-height cabinets in an open-plan office. Sliding windows from floor to ceiling link the offices to the garden and new skylights provide extra light from the north. These studios where we work on our buildings form a kind of mother typology for all the other ‘houses’ we create. The ensemble with its large living kitchen wants to be more than an office. We live where we work; work where we live.
Tags
Urban Interior Office Natural Daylight Intimate Refurbishment Tactility Landscape Adaptive reuse Energy transition
Client
Paul Robbrecht and Hilde Daem
Architects
Robbrecht en Daem architecten
Program
conversion of a former wood storage into offices
Location
Ghent, Belgium
Date
2005–2007
Status
Completed
Floor Area
1.320 m2 (interior), 2.000 m2 (exterior)
Team
Paul Robbrecht, Hilde Daem, Johannes Robbrecht, Bert Haerynck, Arne Deruyter, Kris Van Buynder
Structural Engineering
BAS (Dirk Jaspaert)
Landscape
Seghers Landschapsarchitecten 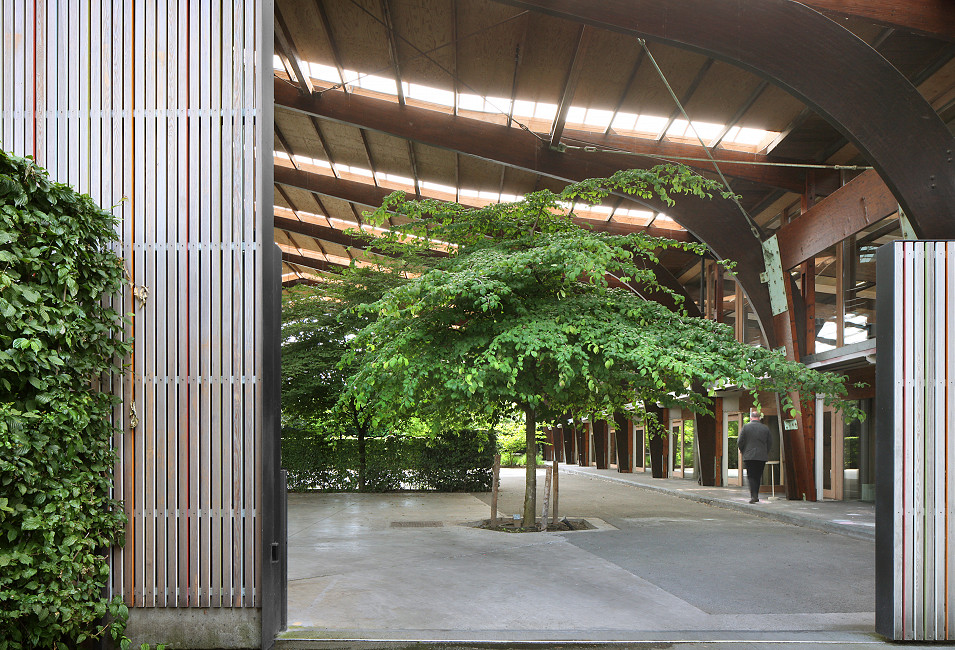 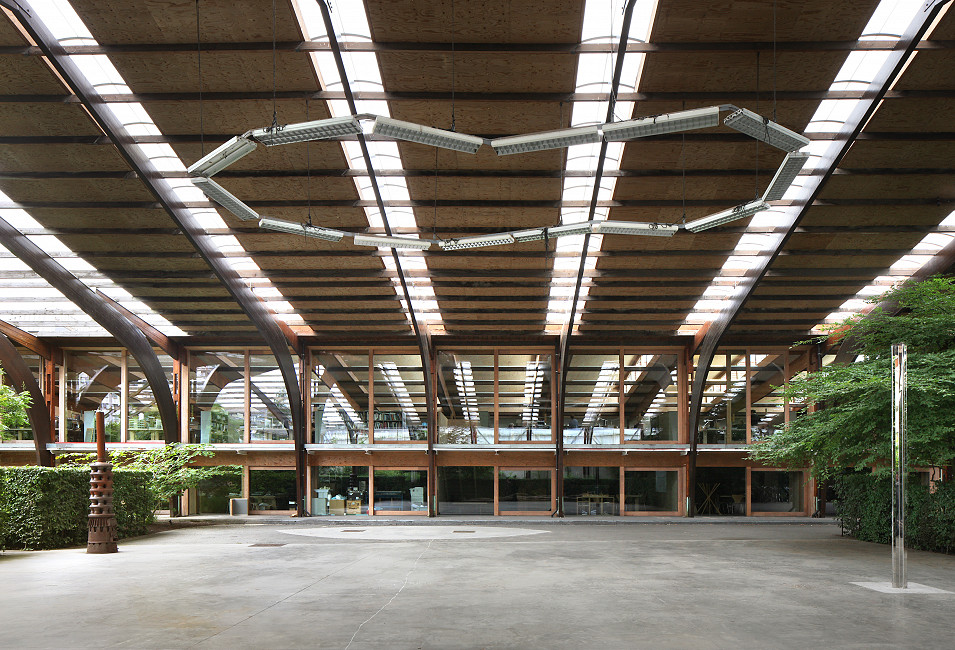 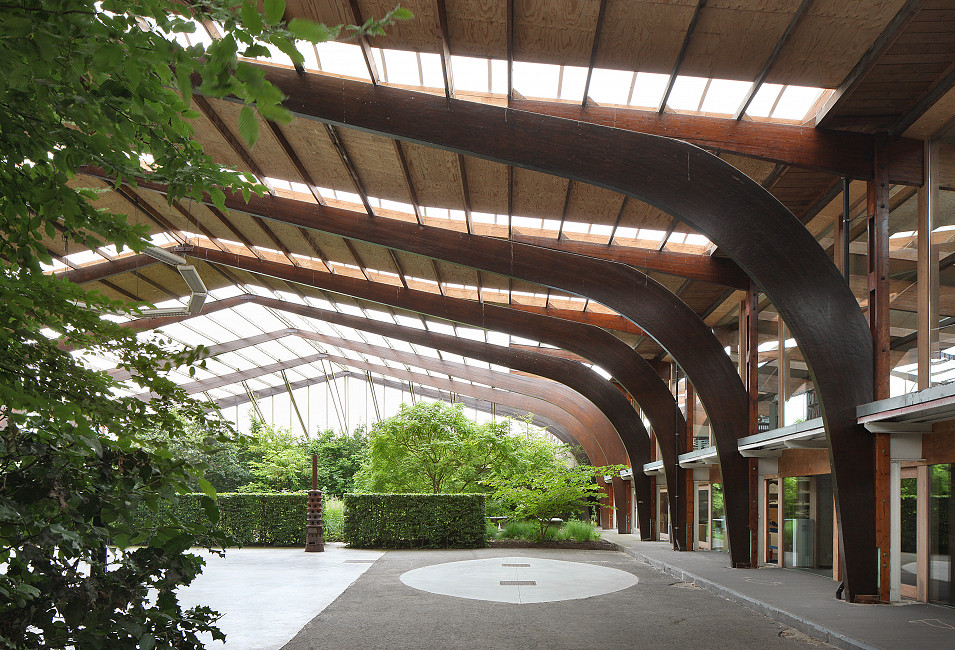 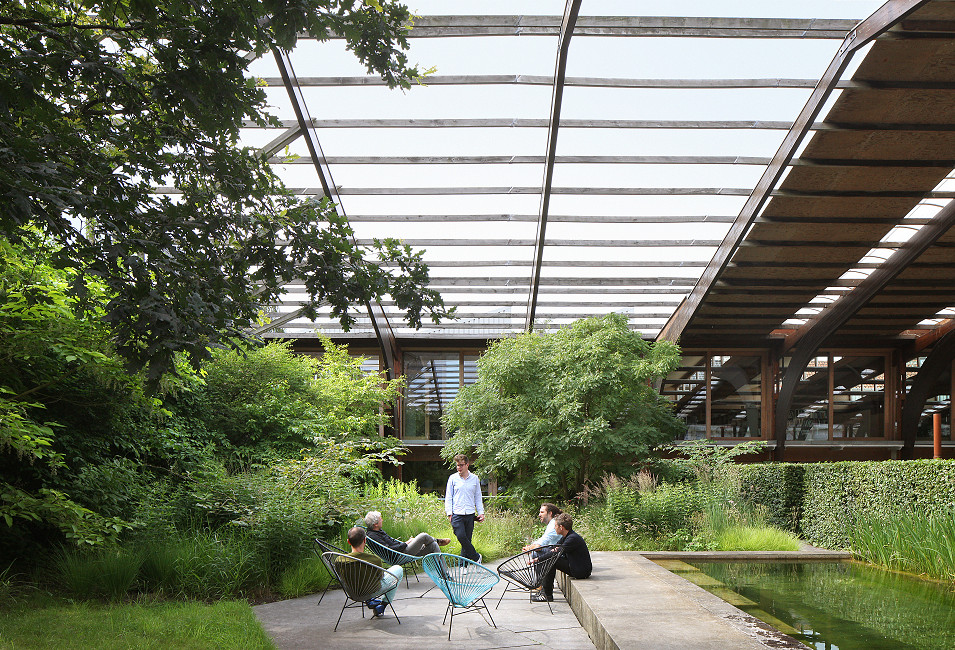 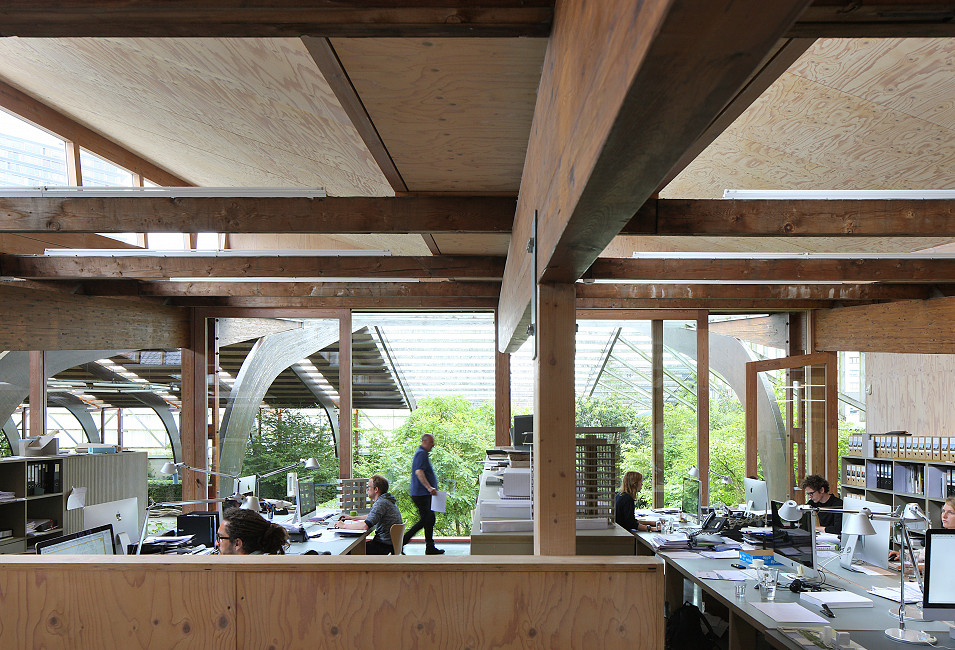 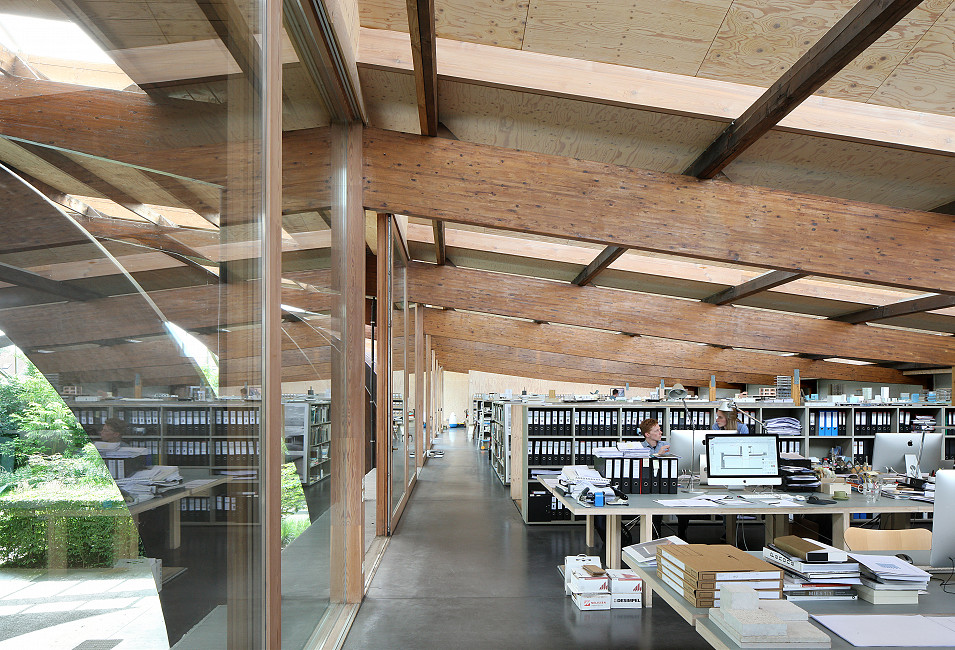 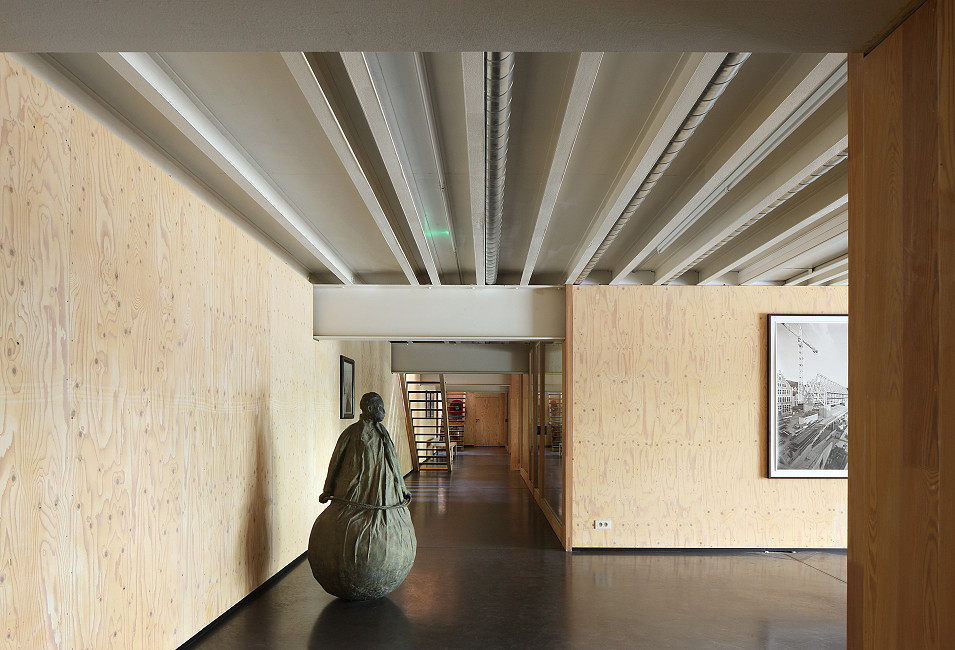 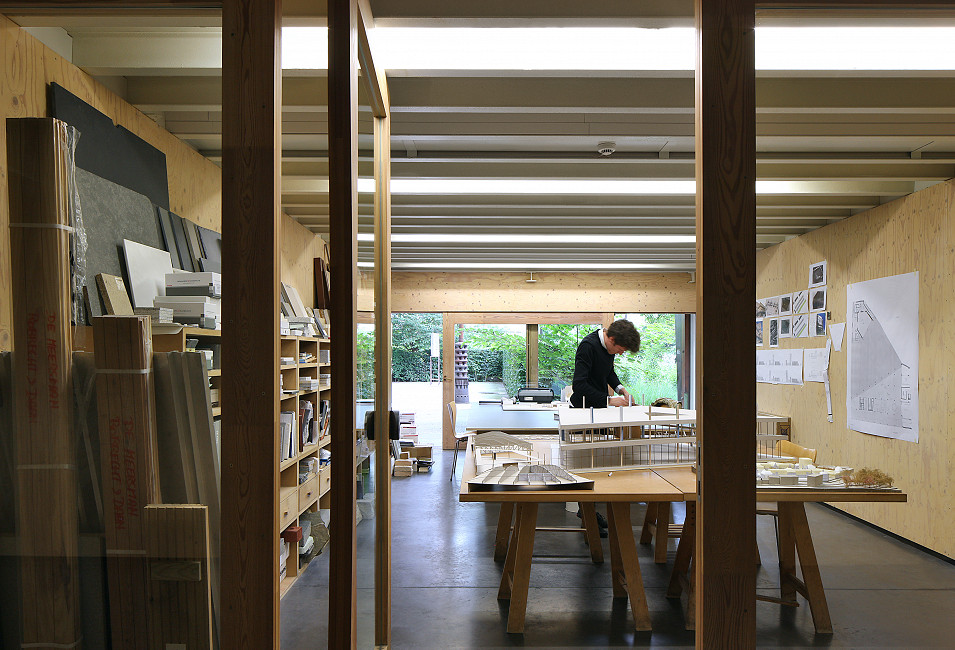 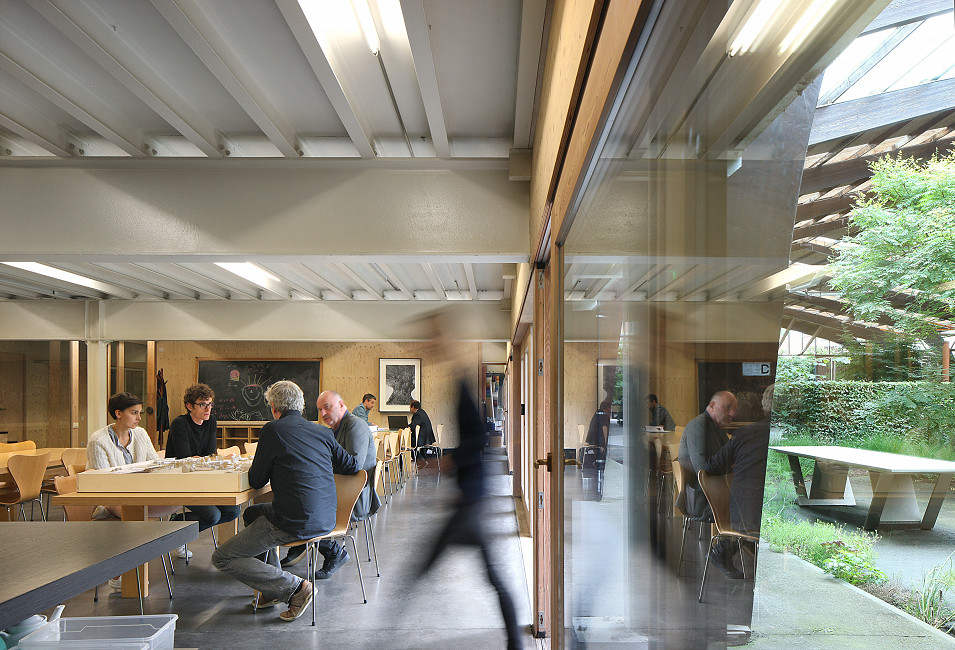 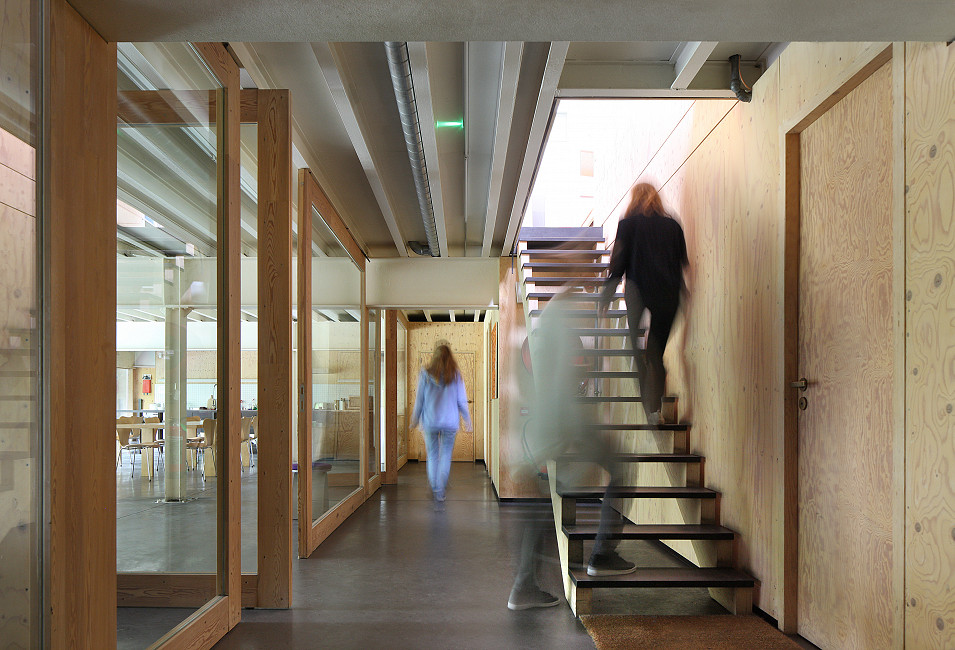 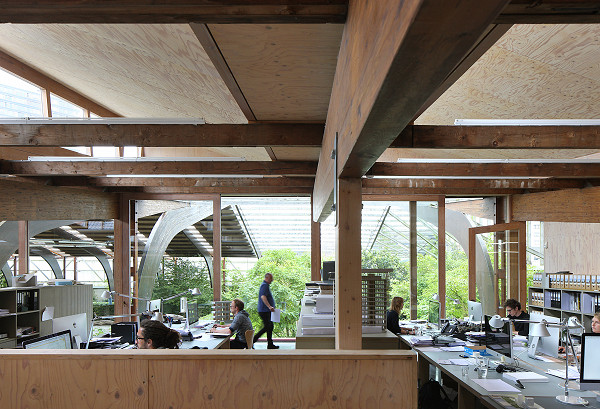 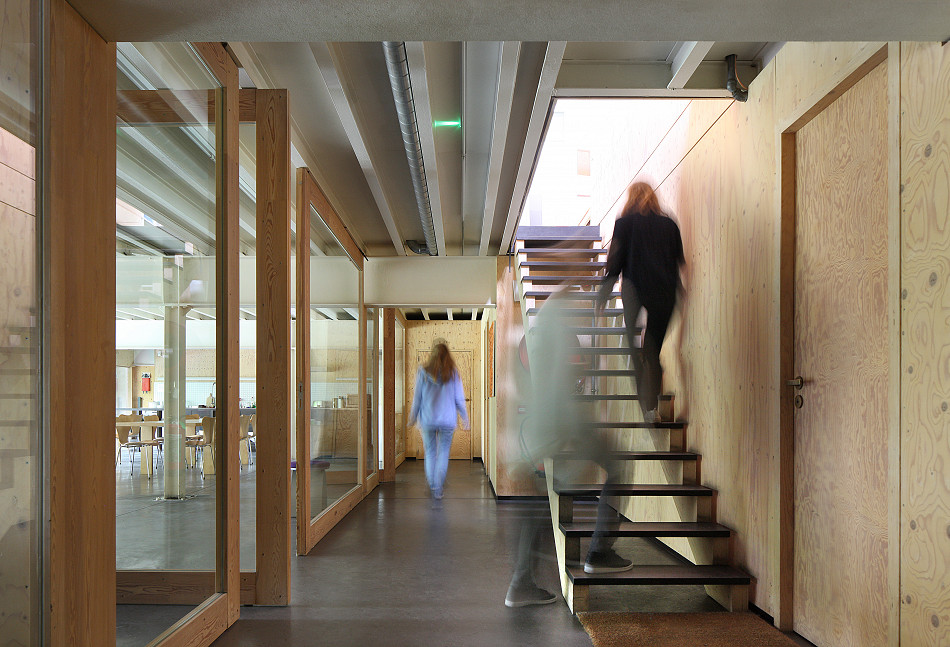 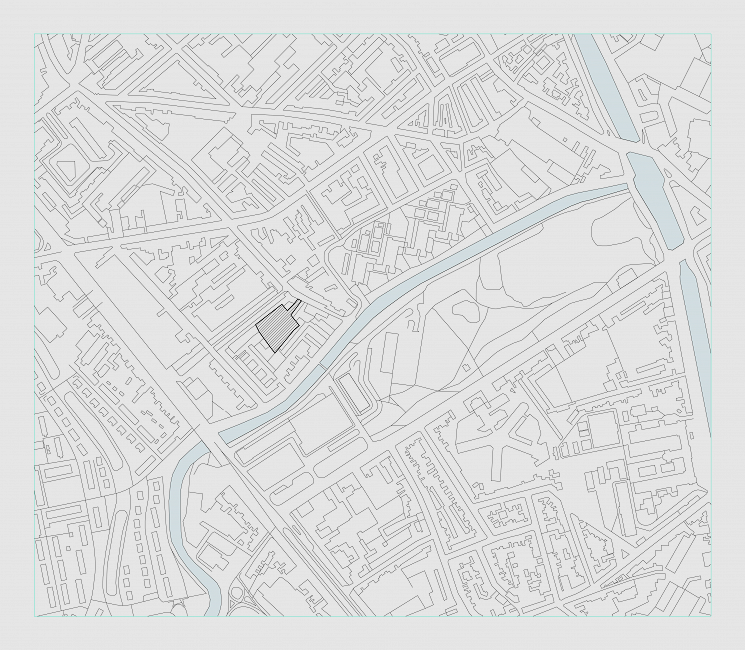 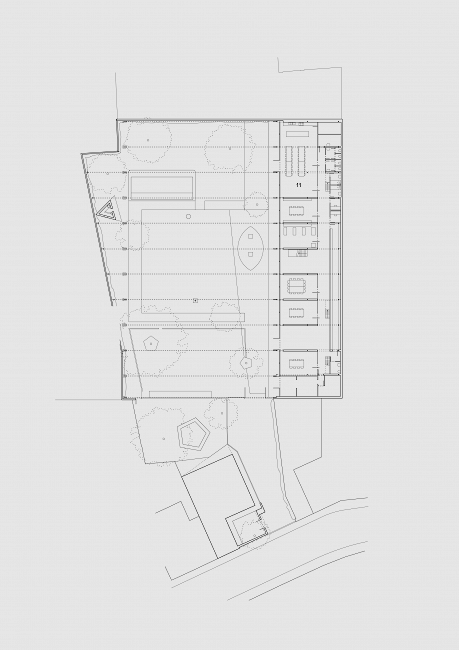 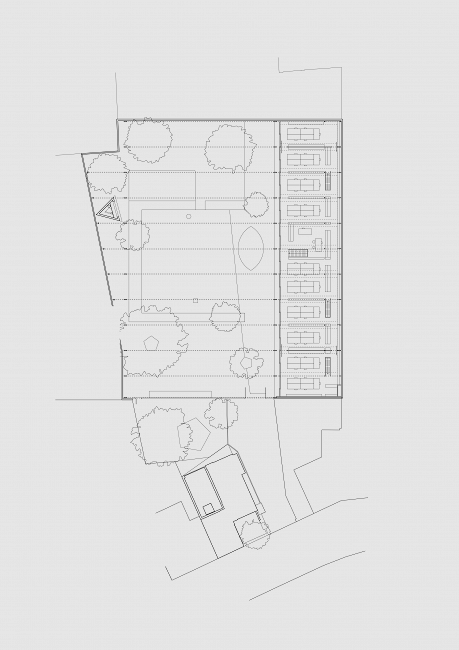 Features of the Human Scene. People's Expectations and Architecture by Christophe Van Gerrewey
What people can expect from buildings is not a question that can be answered once and for all, primarily because their mutual relationship changes constantly. Architecture – valuable and life-affirming architecture – is perhaps more expensive and more inaccessible than ever, not so much because the price of materials and building costs are increasing, but because not enough is being invested in buildings accessible to all. That is why, in a... Read more
Encounters with
Maarten Vanden Abeele
15.10.2021
Now 4: Dag van de Architectuur

Media Building
Brussels, Belgium
2015–2019
Clad in a crystalline skin of structured glass and brass-coloured anodized aluminium frames, this park building is embedded in the variable topography of its site, with each side responding to a different context. Whereas the long facade addresses the longitude of the park and the frontality of the ‘Ereperk der Gefusilleerden’, a military cemetery for both World Wars, the northern volume anchors the building in the urban fabric... Read more
BAC Bank
Kerksken, Belgium
1987–1989
BAC Bank in Kerksken is a local bank branch and is one of the very first projects of Robbrecht and Daem architecten. The building stands on a plot that is grafted diagonally to the street and had to be bordered on one side by a blind facade. The complex geometry of this plot was therefore the basis of the design for the layered facade and the play of perspectives that it creates. With a bus stop on the doorstep, the facade projection gained... Read more
Katoen Natie VDW
Antwerp, Belgium
2020–…
Located between the many historical warehouses in the ‘Natiebuurt’ and around the corner from their headquarters, Robbrecht en Daem architecten designed this new residential building for Katoen Natie. On the one hand, the design refers to the surrounding 'warehouse architecture', but it also wants to retain the smaller grain and vertical articulation of the existing terraced houses. The staggered cornice emphasises this verticality and... Read more
3 Fonteinen
Lot, Belgium
2017–…
3 Fonteinen is a traditional lambic and gueuze brewery with a long history dating back to 1887. It is known for its adherence to heritage, honest production methods and the place it has held for years in the top 50 best breweries in the world.Today, the brewery is located 'on top of the mountain' in the village centre of Beersel, while the wooden casks are located 'down below' in Lot, next to the Senne. It is in this latter location that 3... Read more
CERA Headquarters
Leuven, Belgium
2007–2017
The new Cera building positions itself carefully within the medieval core of Leuven, opposite the side entrance of the historic town hall and close to the Grote Markt. It constitutes the true ‘heart of the city’. Originally the site consisted of a complex conglomerate of buildings with the Hôtel d'Eynatten from 1760, a neo-Gothic wing from 1917 and a corner building in sober reconstruction architecture from 1948. In order to free up space in... Read more
Close
Filter by type
Filter by status
Filter by category
Filter by tag