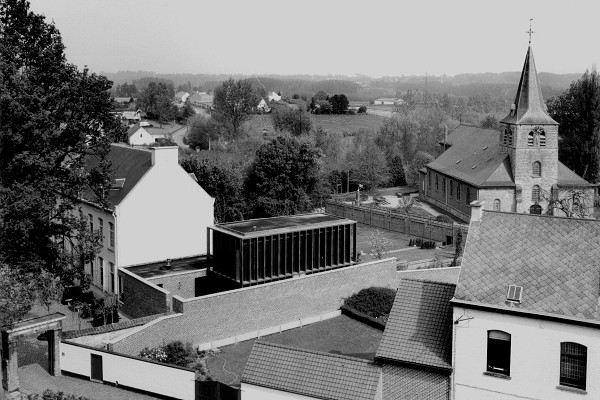 A complex but recognisable setting is composed of a church, a vicarage, a glebe, a brick silo, a brewery, and above all a set of large trees. In short, an idyllic and typical Flemish landscape that somehow predates the Second World War neither touched nor spoiled. In all its aristocratic allure, the 18th-century vicarage exudes a forgotten past that poses a real challenge to all things new. The humble garden walls form a dominant role in the design of the addition to the vicarage, now a private home. The current owners obtained the next plot of land with the purpose of building a modern kitchen (ground floor) combined with a leisure space (first floor). The original garden wall of the glebe had to be kept and the addition had to play a double act: to create a self-supporting element while at the same time connecting itself to the white manor and bridging the glebe wall. A juxtaposition that can withstand scrutiny from the contemporary angle had to be able to catapult the entire ‘locus’ into a new era while respecting all the previous interventions.
A pavilion based on a straightforward grid has been placed alongside the short elevation of the vicarage. Slightly skewed to accommodate the dominant garden walls, it gently steps forward into the sequestered garden. A cut has to be made in the glebe wall and is left as an obvious wound, while the geometry of the pavilion assures continuity. The side elevation has a proportion that nears 5 to 8, but its height remains below the main parapet of the manor, just below the floor of the attic. Although constructed in wood laminate, its entire structure is covered with lead. All the uprights alternate with full-height glass panes. Sheets of glass are contained within frames of lead, establishing a clear analogy with the traditional windows of the church at the back of the garden.
From the church’s point of view, a subtle game is played between the white-washed vicarage and the lead-covered structure. Visually the bright white building steps forward, while the dull-finished pavilion seems to be receding, a cunning illusion as in reality the pavilion protrudes from the vicarage with a different orientation. Despite its darker appearance a feeling of weightlessness next to its older counterpart gives its presence without pretence or self-denial.
Text by Rik Nys - Original Publication: Rik Nys, “Paviljoen bij woning Galle”, in Jaarboek Architectuur Vlaanderen, 2000–2001 (Antwerp, 2002), pp. 182–6.
Tags
Interior Extension Intimate Refurbishment
Client
FICO Flanders Investment Company (Mr. and Mrs. Galle-Michiels)
Architects
Robbrecht en Daem architecten
Program
Extension to a presbytery house with a garden pavilion
Location
Essene, Belgium
Date
1999–2003
Status
Completed
Floor Surface
225 m2
Team
Paul Robbrecht, Hilde Daem, Els Claessens
Structural Engineering
BAS (Dirk Jaspaert)
Landscape
Erik Dhont 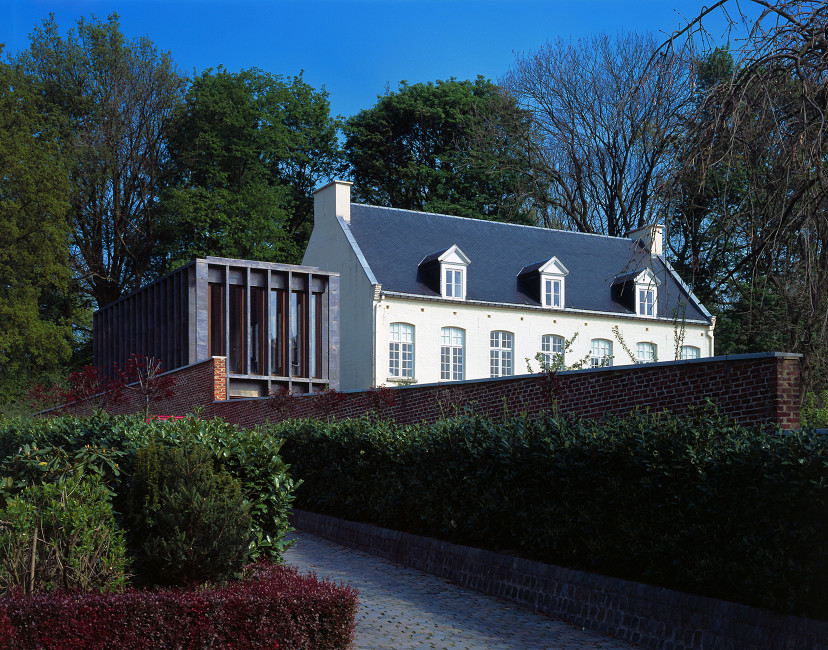 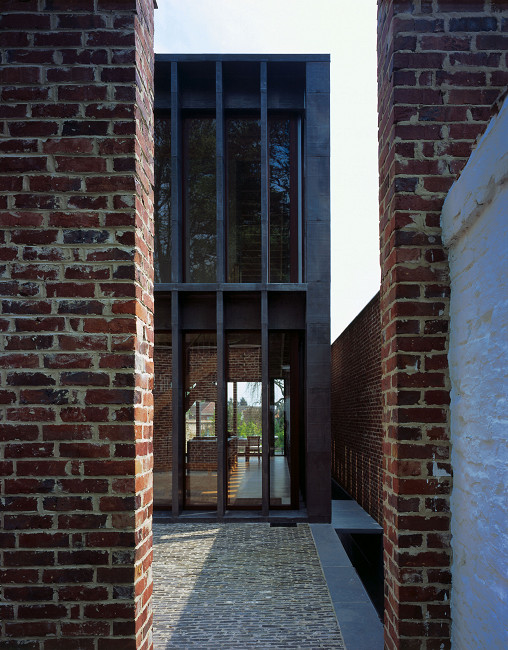 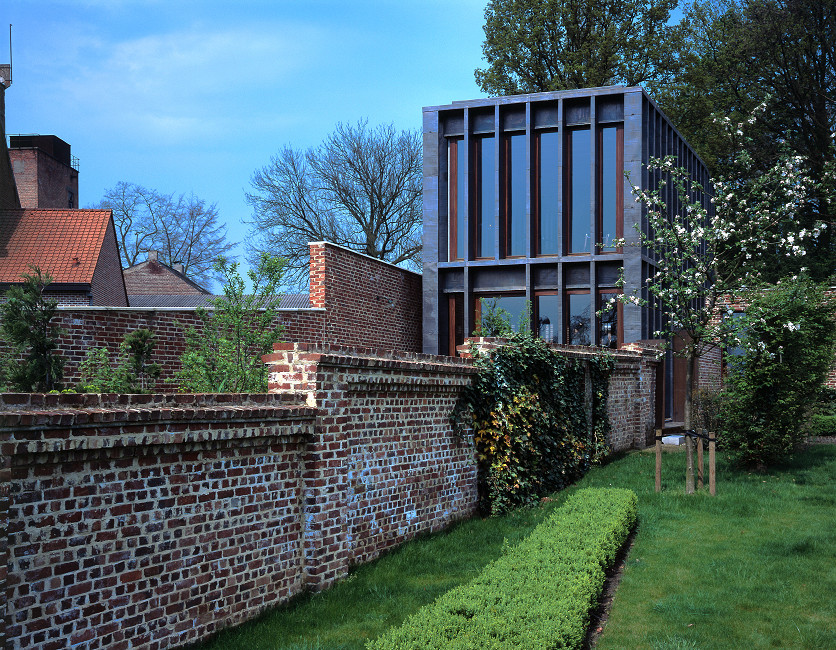 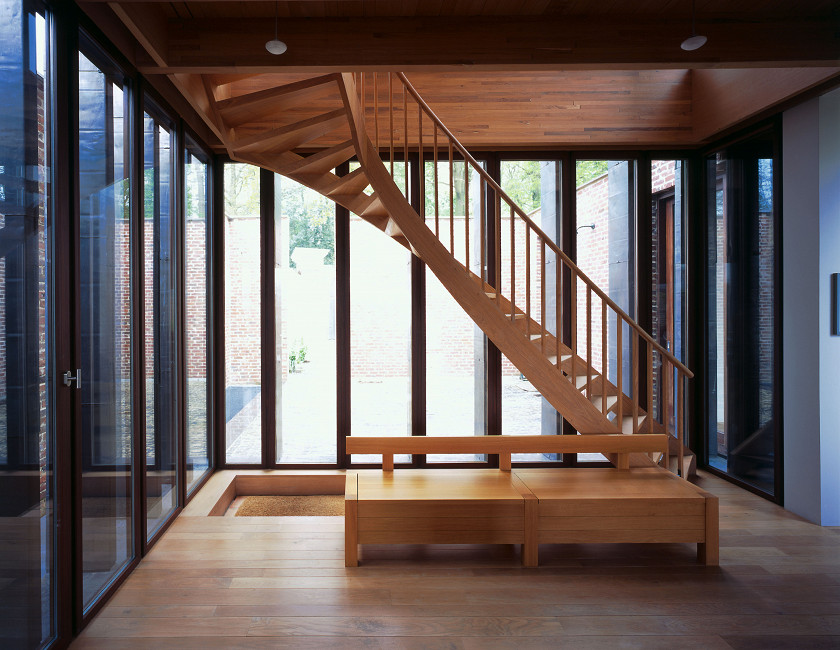 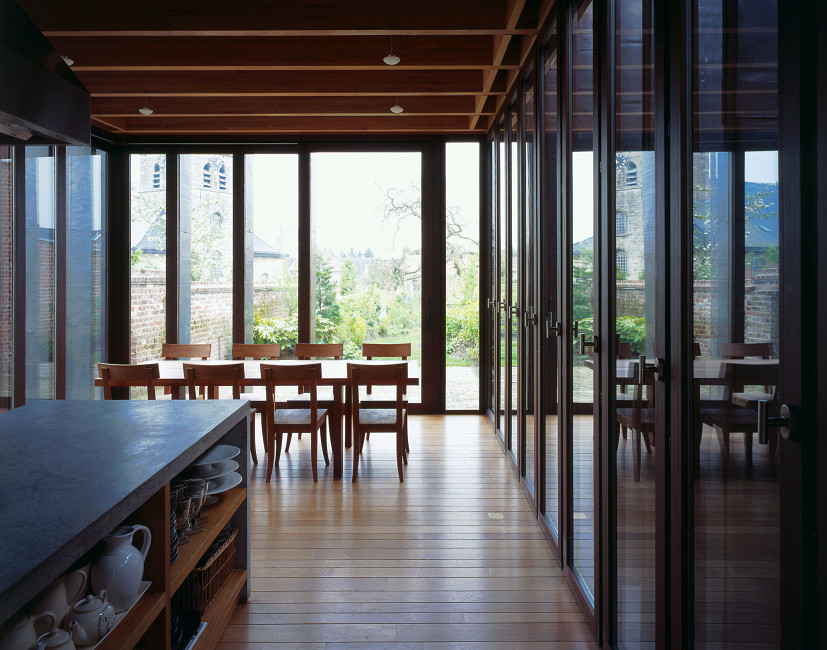 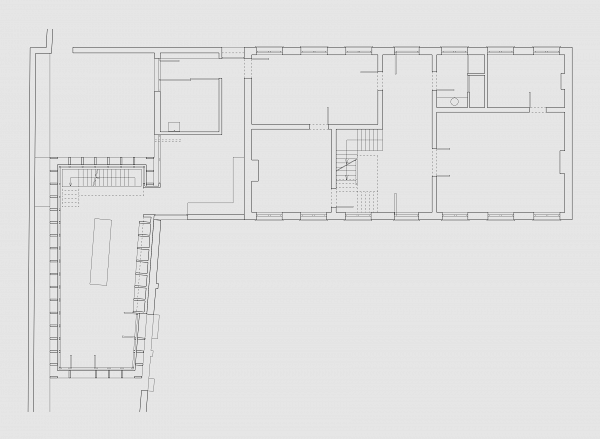 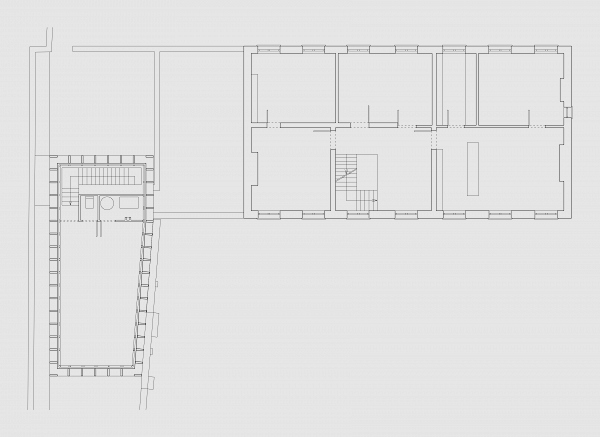 Zuidertuin
Antwerp, Belgium
2013–2016
The residential building ‘Zuidertuin’ is part of the urban development for the Nieuw Zuid district in Antwerp. This new district extends between one of the busiest traffic intersections in Belgium and the wide open spaces of the Scheldt Quays and the river bed. Some 49 residential units of varying sizes with ‘through lounge’ are divided among the six levels in the form of duplex units or standard apartments. At the centre of the plinth... Read more
Mys House
Oudenaarde, Belgium
1983–1992
The building trade and the social situation in the early years of our practice were such that the majority of our commissions consisted of interventions to existing buildings or spatial redesigns of building complexes. In this way we contributed to the sum total of the building activity which - in an on-going interrelationship of action and reception produced a considerable material output at that time. We perceive that totality as primary matter... Read more
Park Abbey
Heverlee, Belgium
2019–…
Park Abbey is a 12th-century heritage site that is undergoing a complete restoration by Studio Roma. For the design of the circulation within the abbey's eastern (and primarily public) wing, Studio Roma called on Robbrecht en Daem architecten. Within this design, two tower volumes with a pentagonal footprint were chosen as circulation cores. The larger tower in exposed concrete is part of the museum route, and the smaller tower in steel serves as... Read more
Katoen Natie VA
Antwerp, Belgium
2017–2022
This corner building houses an exhibition and event space for Katoen Natie, combined with residential units above. The project is situated adjacent to the company headquarters. The headquarters - which consists of several former port warehouses - was previously renovated by Robbrecht en Daem architecten. The new project visually relates to it as a sort of continuation of the earlier work. The choice of a concrete façade and an aligned cornice... Read more
Academiestraat
Ghent, Belgium
2012–…
The project involves the redevelopment of an inner-city block in the centre of Ghent to provide ninety residential units, some new-build and others partially housed in the protected monuments of the former Royal Academy of Fine Arts and fire station. These existing buildings flank a new semi-public interior street that serves as the backbone for the redevelopment of the entire block. The interior walkway connects with two new apartment buildings... Read more
Close
Filter by type
Filter by status
Filter by category
Filter by tag