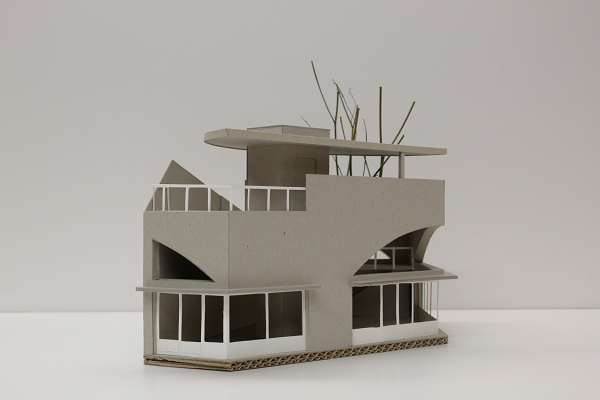 The De Konincksite project is located on the border of Antwerp and Berchem, on the edge of Albert Park. Around the existing city brewery, this area is developing into a fordable 'crafts area' (with a lively programme of small shops) and a residential superstructure (with a hotel and flats).
Originally, the adjoining plot with the city brewery (the 'mother site' as it were) was criss-crossed by alleyways and squares. The present design aims to retain that concept and even reinforce it between the three building blocks. This creates a network of patios and new public spaces, which create a highly permeable plinth. It follows that the all-sidedness of the plot will be achieved through volumetry and design. Building blocks are not given a real 'back'. Each side is given the design attention, detailing and perception of a front. Frontages fold completely around a building block. They continue their game of terraces on all sides. In this way, the 'back sides' also enter into active dialogue with the bustling inner area via footbridges.
The rising façades of the three blocks will be realised in a light red tone, a reference but also a variation on the red brick architecture of the industrial heritage on the neighbouring site. The façade joinery will be made of natural-coloured aluminium.
Tags
Urban Heritage Masterplan Bar Restaurant Intimate Historical City
Client
Triple living nv/ LIFE nv
Architects
Robbrecht en Daem architecten
Program
A fordable 'crafts area' with a residential superstructure
Location
Antwerp, Belgium
Date
2021–…
Status
Ongoing
Floor Surface
5024 m2
Team
Paul Robbrecht, Hilde Daem, Johannes Robbrecht, Tine Bulckaen, Charles De Muynck, Ken Standaert, Ines Verbiese, Natalija Stojić
Masterplan
Studiegroep Omgeving
Project Manager
The Brewer’s Daughter
Structural Engineering
Ingenieursbureau Concreet
Services Engineering
Gebotec
Acoustics
Scala Consultants
Building Physics
Pi-consult
Landscape
Studiegroep Omgeving
Developer
Triple living nv/ LIFE nv 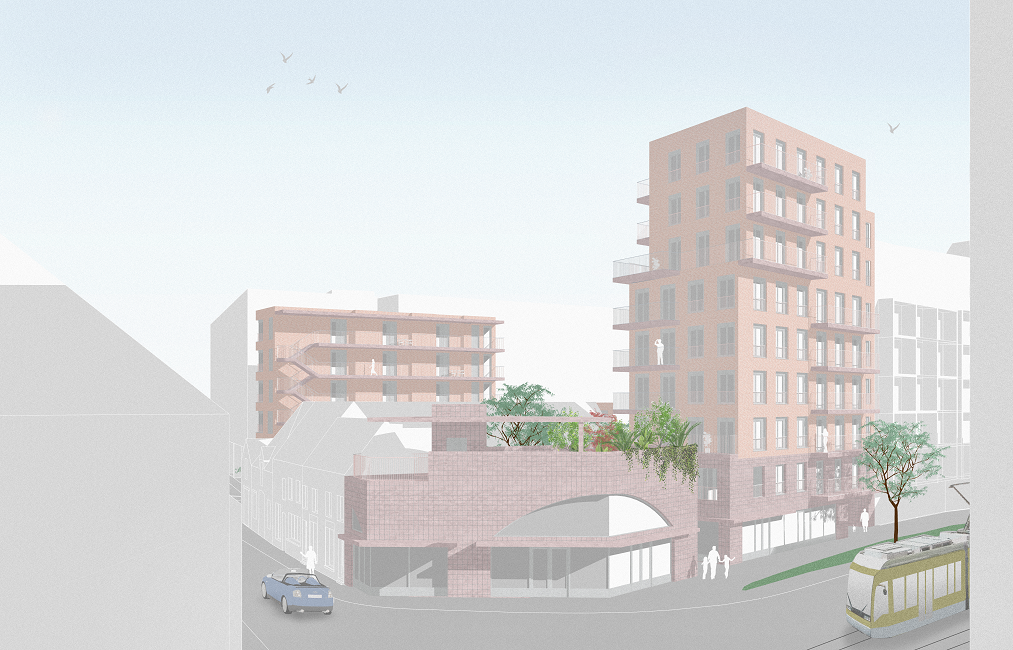 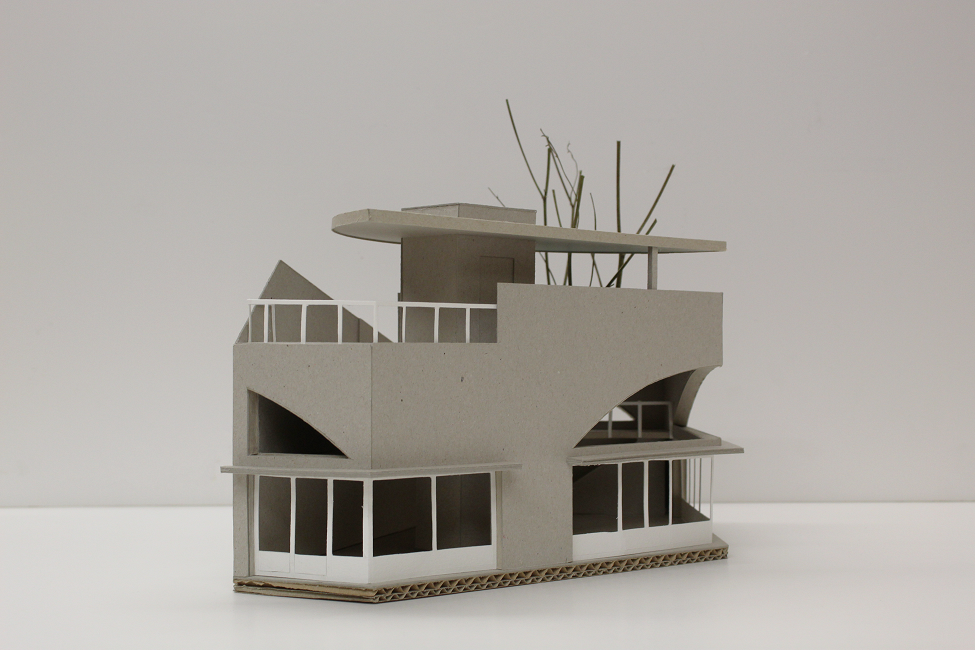 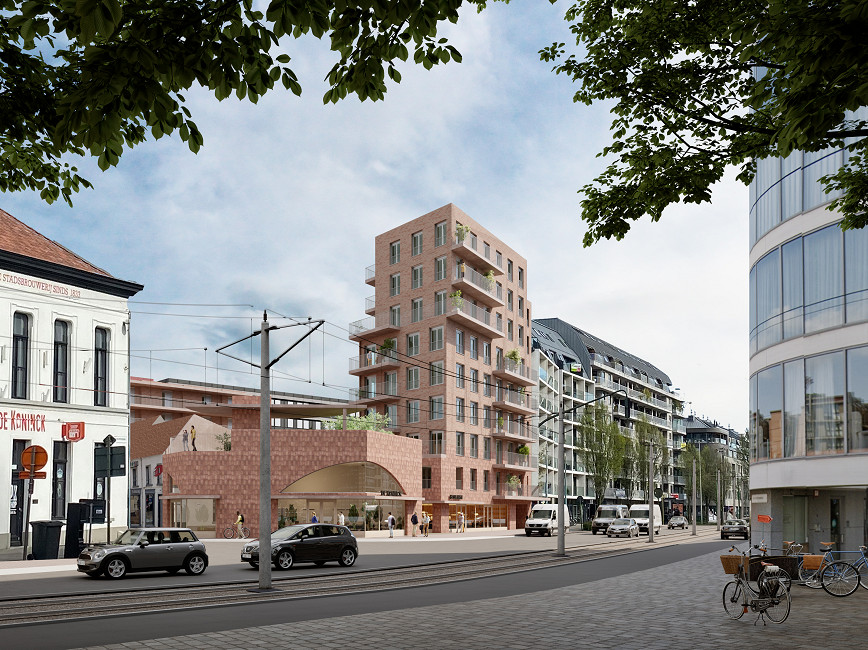 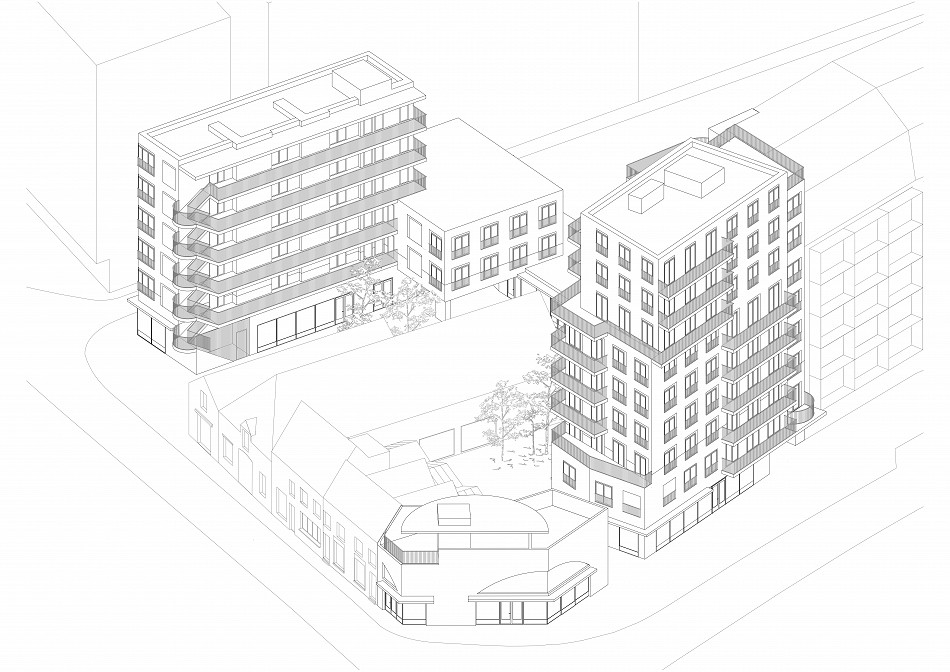 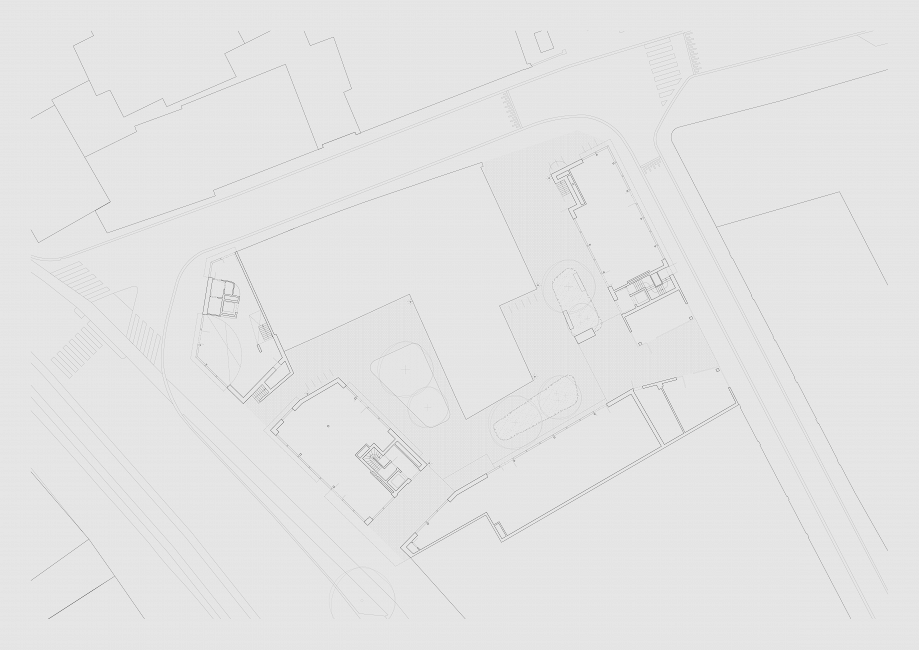 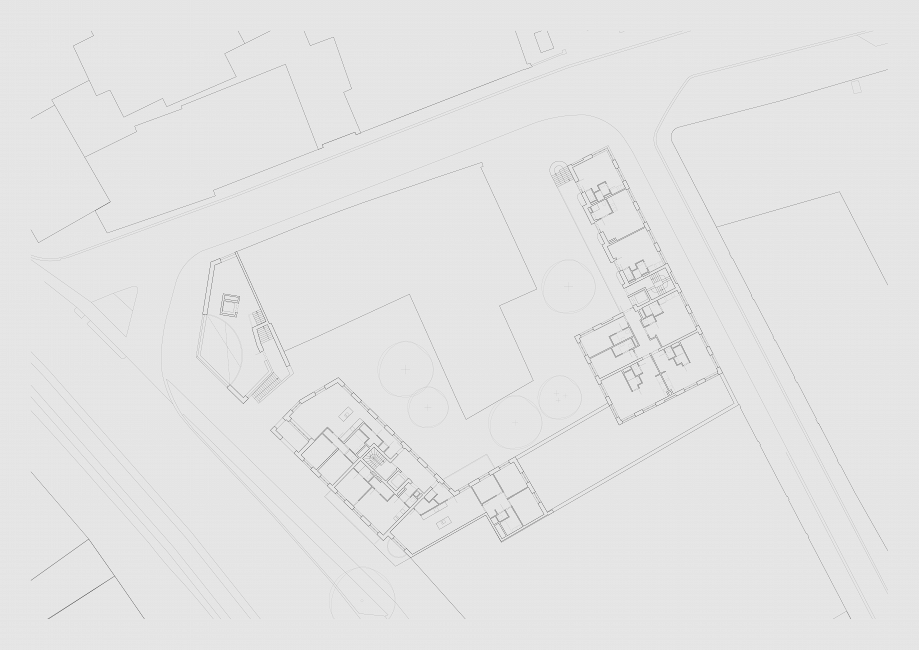 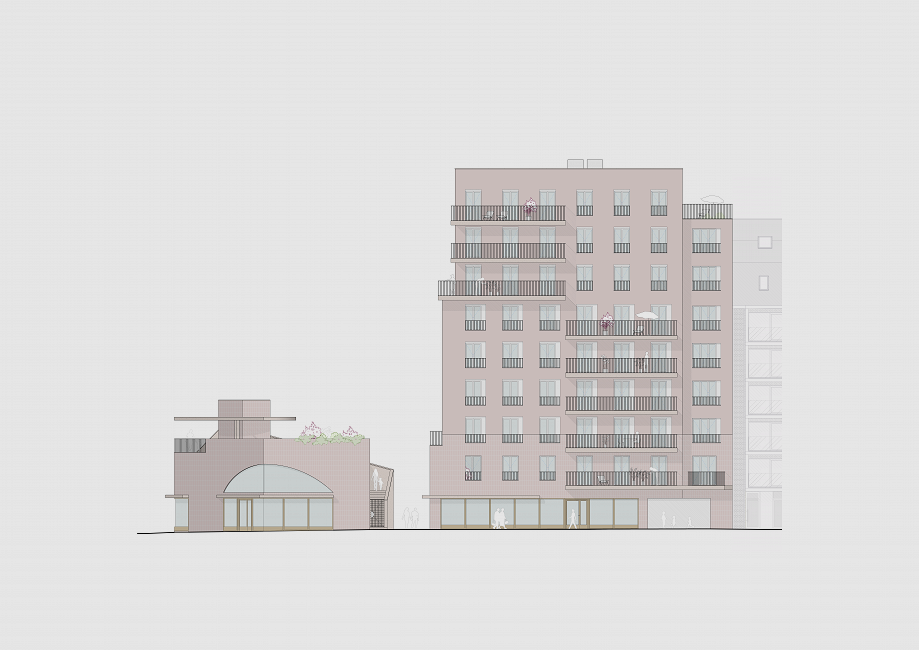 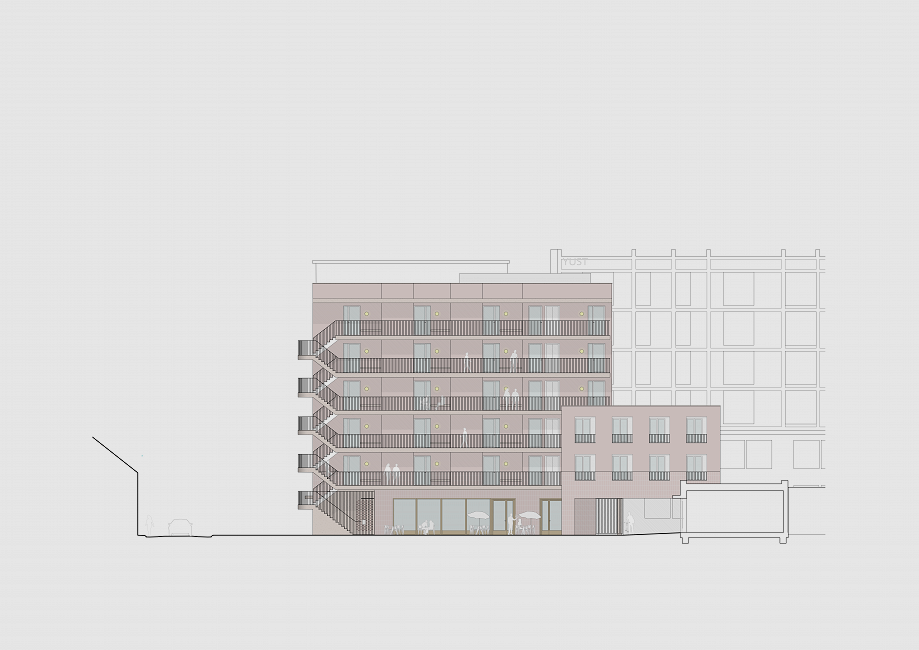 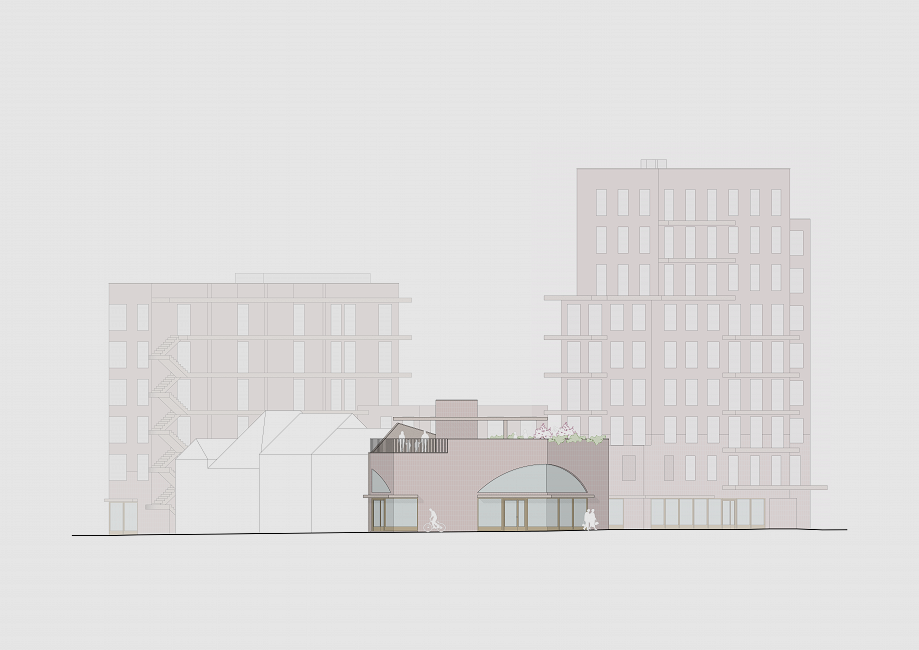 Slachthuissite
Antwerp, Belgium
2018–…
On the plots of land belonging to the former municipal slaughterhouse in Antwerp's Dam district, a master plan for a new part of the city is unfolding. The design by Robbrecht en Daem architecten includes three buildings within one of the building blocks. This is the first building block that will be built on the site. The head of this building block also marks the beginning of the future park.Despite the differences between the three buildings... Read more
Katoen Natie VDW
Antwerp, Belgium
2020–…
Located between the many historical warehouses in the ‘Natiebuurt’ and around the corner from their headquarters, Robbrecht en Daem architecten designed this new residential building for Katoen Natie. On the one hand, the design refers to the surrounding 'warehouse architecture', but it also wants to retain the smaller grain and vertical articulation of the existing terraced houses. The staggered cornice emphasises this verticality and... Read more
Winge Golf and Country Club
Tielt-Winge, Belgium
2011–2014
In the new clubhouse for the Winge Golf and Country Club, the relationship between inside and outside is crucial, as is the merging of the functional and the scenic. The white building envelops the entire environment, like a warm white blanket over the gently sloping terrain. Two separate building volumes are connected by a continuously sloping concrete roof, accommodating all practical functions such as tee-off and practice rooms on the one hand... Read more
Katoen Natie VA
Antwerp, Belgium
2017–2022
This corner building houses an exhibition and event space for Katoen Natie, combined with residential units above. The project is situated adjacent to the company headquarters. The headquarters - which consists of several former port warehouses - was previously renovated by Robbrecht en Daem architecten. The new project visually relates to it as a sort of continuation of the earlier work. The choice of a concrete façade and an aligned cornice... Read more
Michiels House
Essene, Belgium
1999–2003
A complex but recognisable setting is composed of a church, a vicarage, a glebe, a brick silo, a brewery, and above all a set of large trees. In short, an idyllic and typical Flemish landscape that somehow predates the Second World War neither touched nor spoiled. In all its aristocratic allure, the 18th-century vicarage exudes a forgotten past that poses a real challenge to all things new. The humble garden walls form a dominant role in the... Read more
Close
Filter by type
Filter by status
Filter by category
Filter by tag