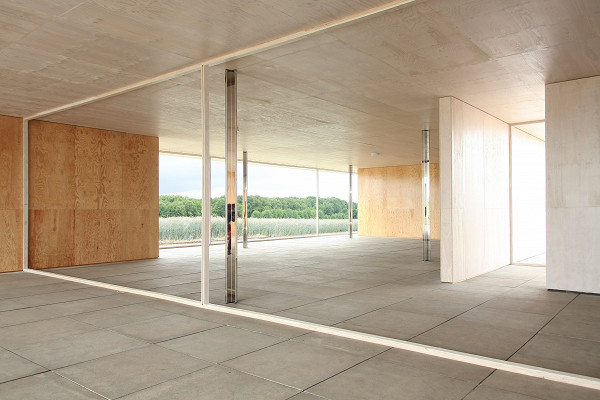 In the summer of 2013 Robbrecht en Daem architecten realizes a temporary pavilion based on a competition design by Ludwig Mies van der Rohe from 1930. The design, a clubhouse for a golf course in the gently rolling countryside around the former industrial city of Krefeld, Germany, was never built at the time it was designed. Christiane Lange, art historian and curator for ProjektMIK, invited Robbrecht en Daem architecten to design an objet d'architecture on the basis of the unpublished historical sketches of the project that were found in the Mies van der Rohe Archive (MoMA) in New York. The temporary installation resulting from this commission was open for viewing from 26 May to 27 October 2013 at the original site of Mies's project. The 84 by 87 metre installation was built primarily in wood. It is a life-size model revealing the essence of Mies's architecture through its abstraction. The pavilion was temporarily enriching the architectural heritage of a city that is known for being home to two of Mies's other remarkable buildings: the double project 'Haus Lange' and 'Haus Esters'.
Tags
Masters Theatre Natural Daylight Sculpture Scenography Circularity Repurposed
Client
Mies in Krefeld e.V. (Projekt MIK)
Architects
Robbrecht en Daem architecten
Program
temporary pavilion based on a design for a golf clubhouse by Ludwig Mies van der Rohe (1930)
Location
Krefeld, Germany
Date
2011–2013
Status
Dismounted
Floor Surface
2.336 m2
Team
Paul Robbrecht, Hilde Daem, Johannes Robbrecht, Tine Cooreman, Tom De Moor, Thomas Hick
Execution Architect
Architektur Buro Ruhnau, DGM Architekten
Structural Engineering
Ingenieurburö Angenvoort, Kroth & Partner
Curated By
Christiane Lange 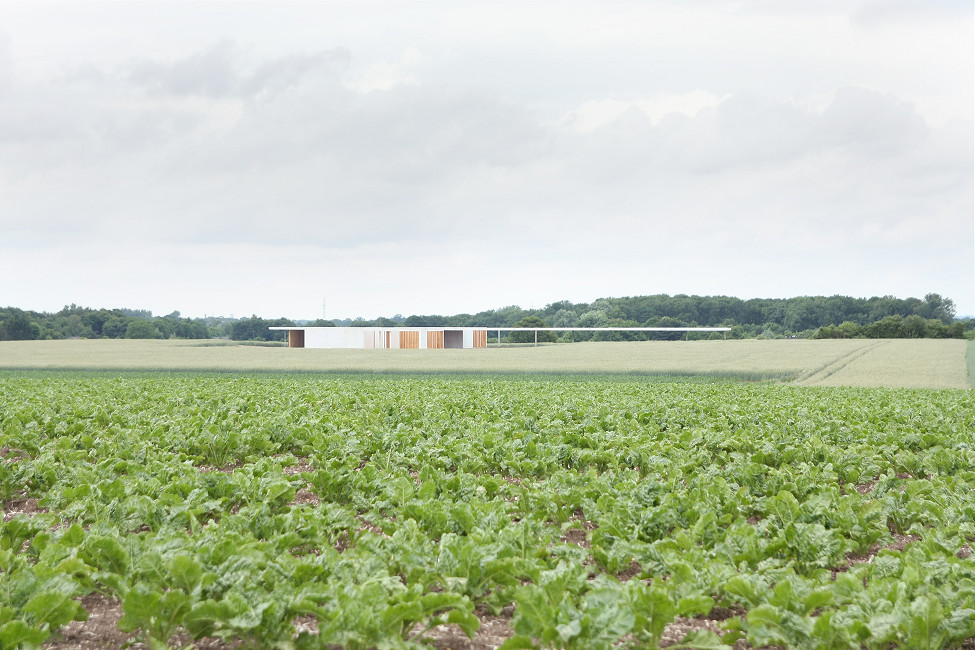 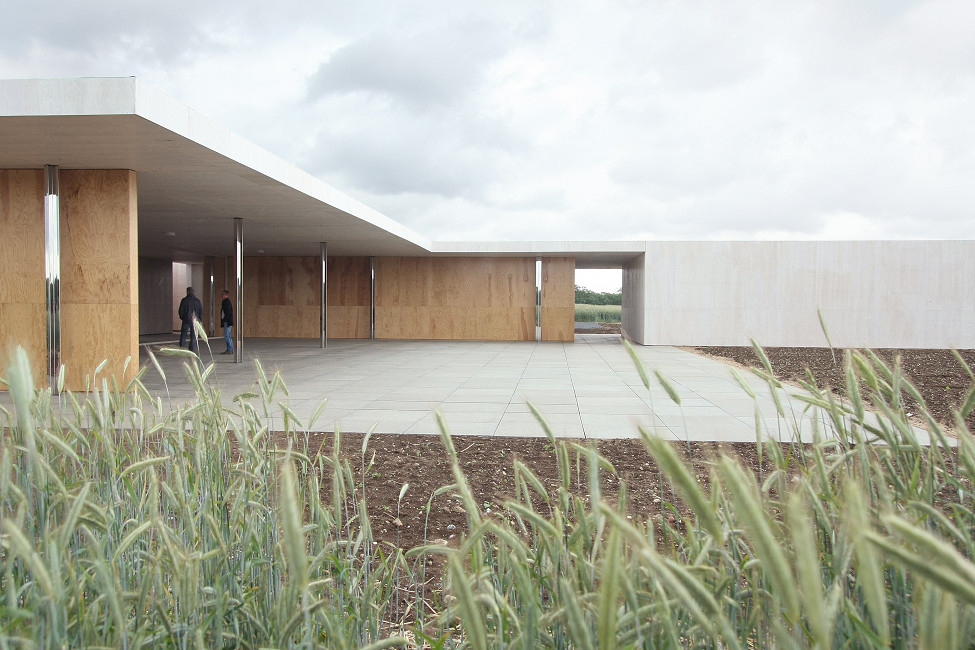 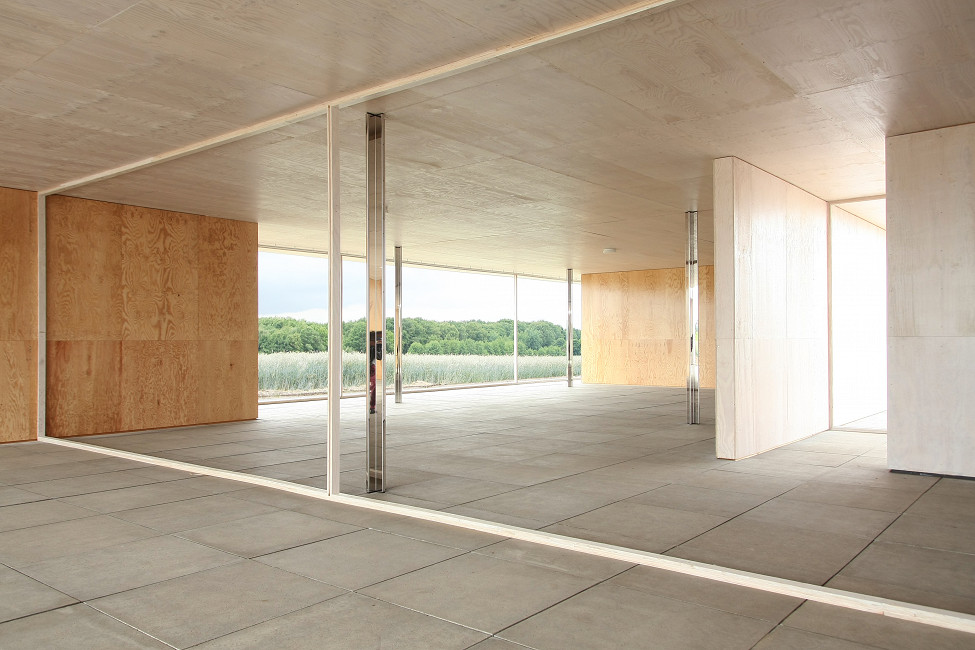 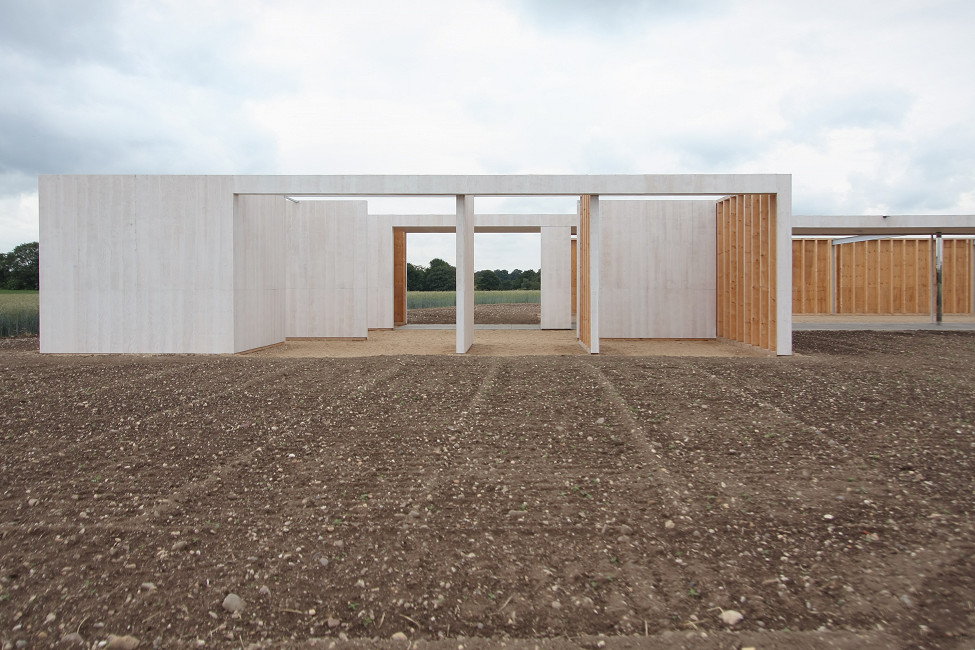 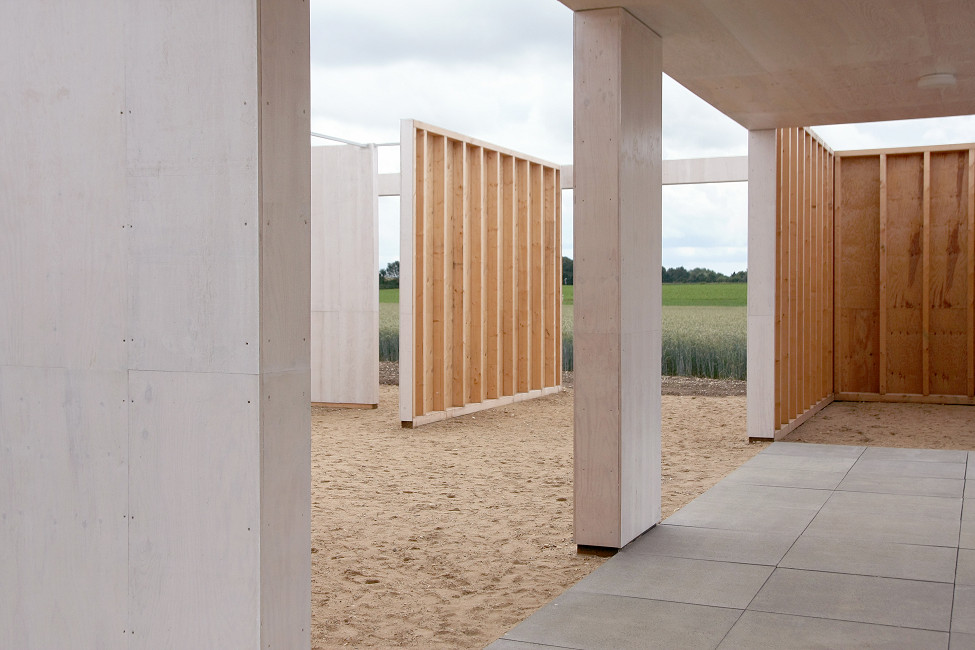 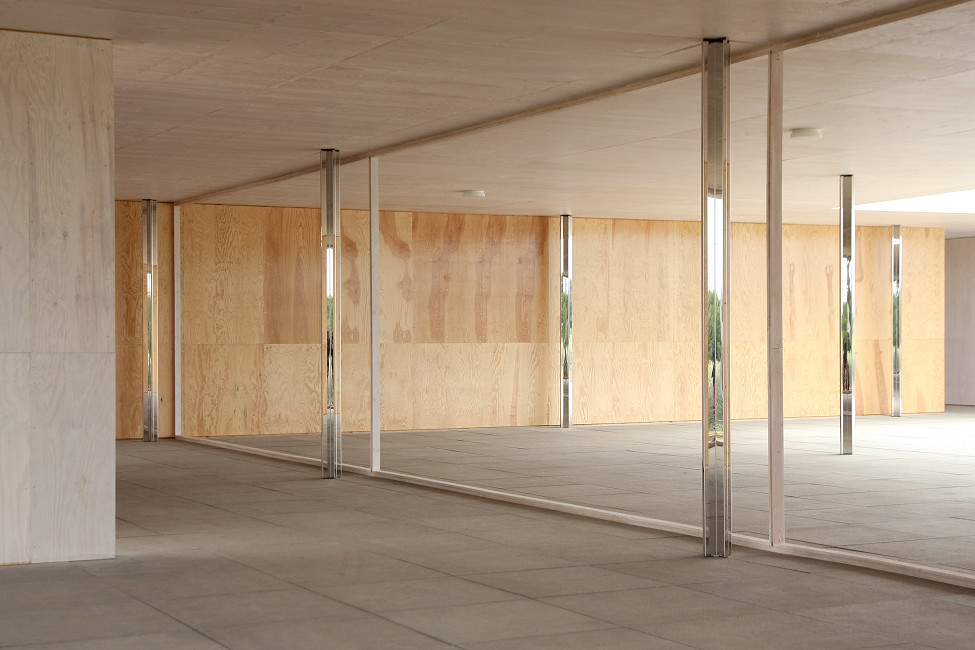 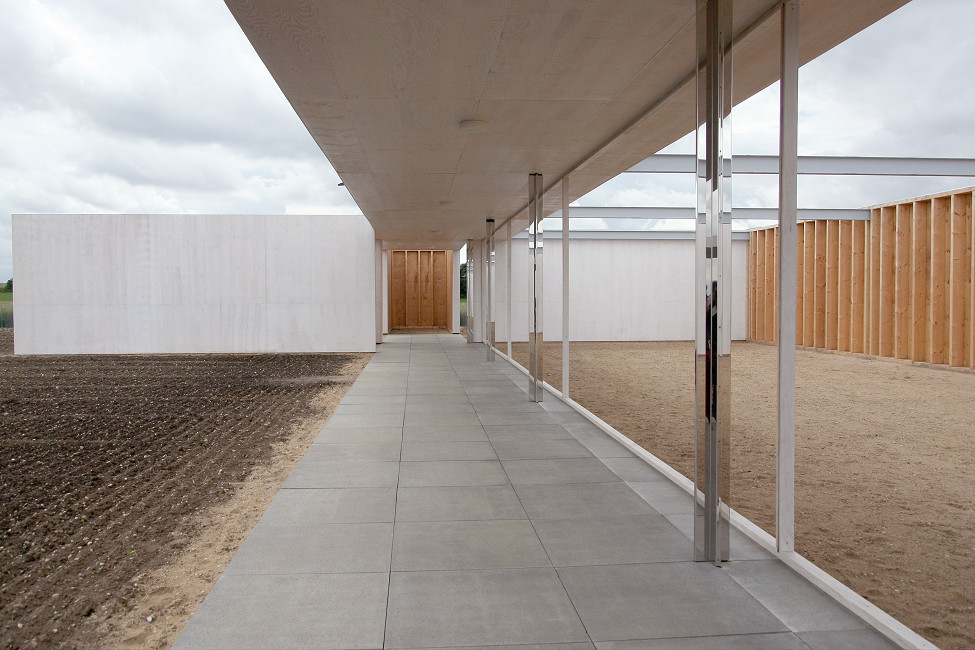 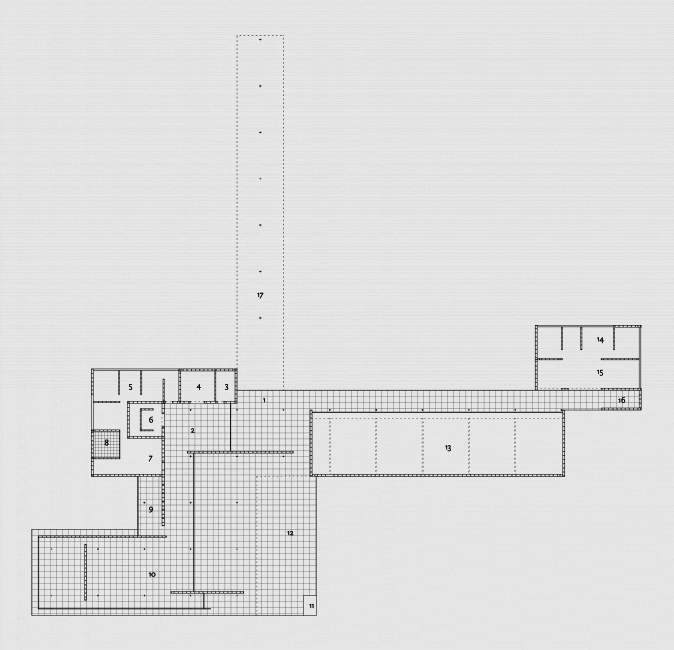 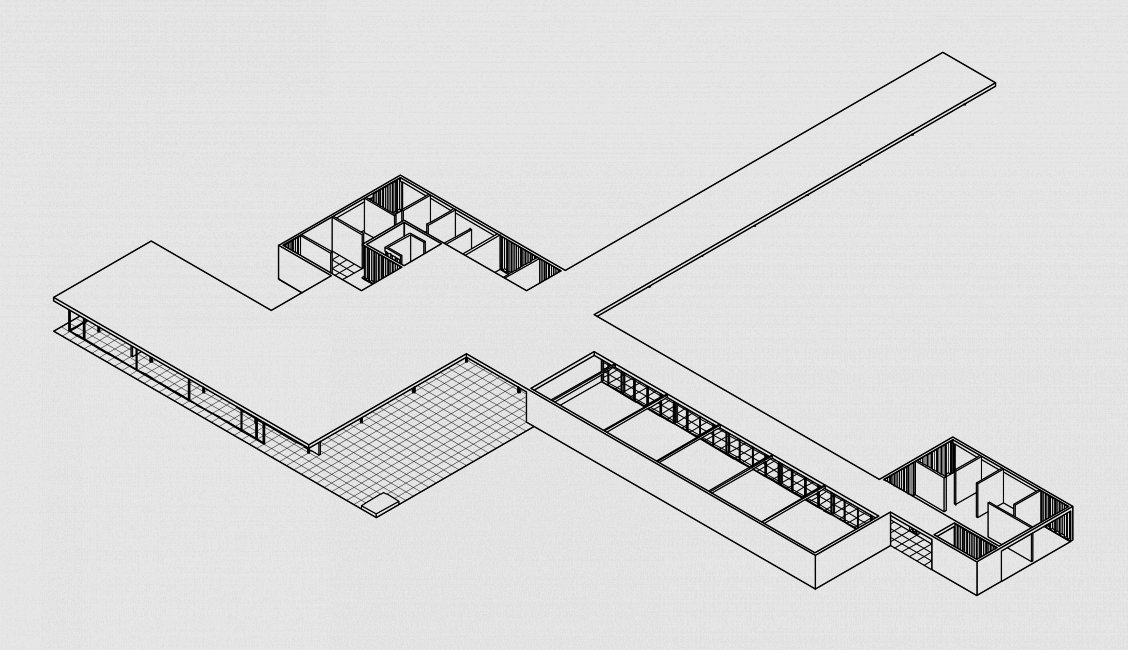 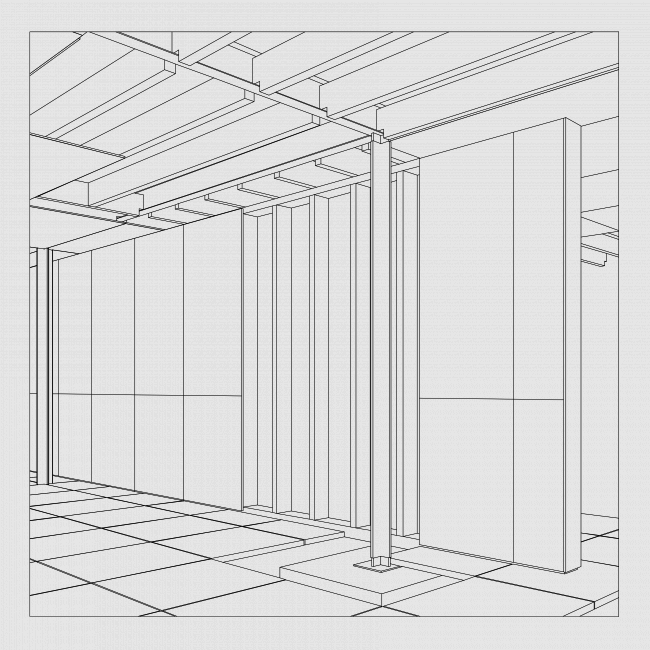 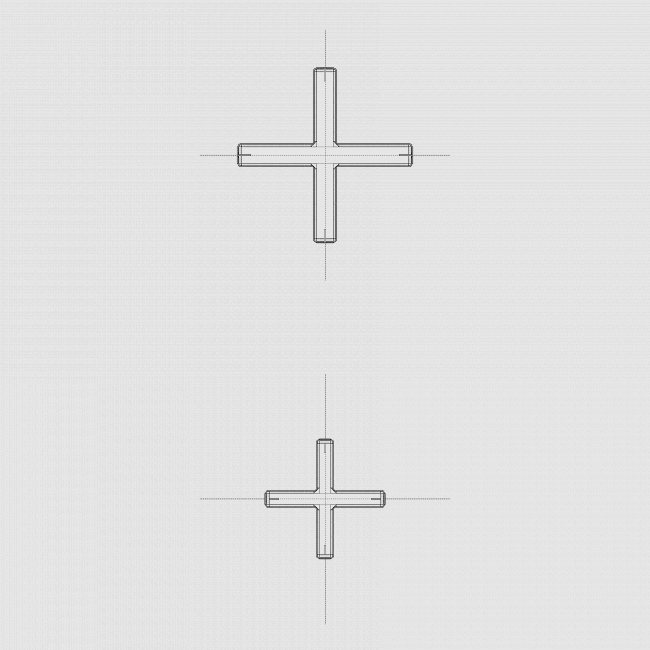 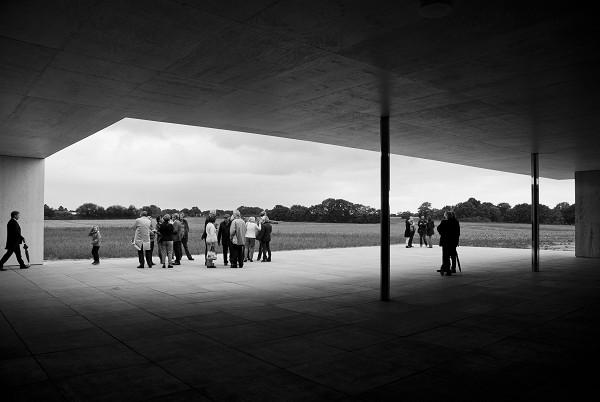 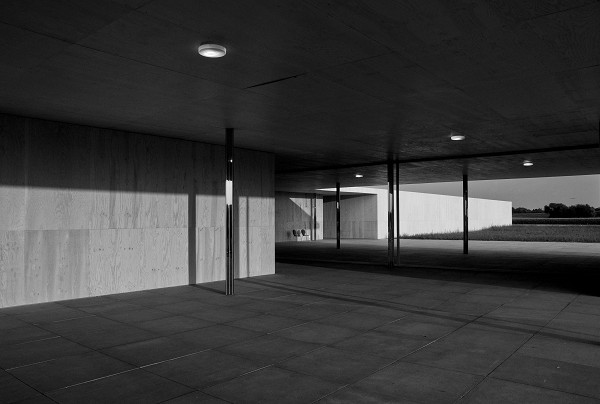 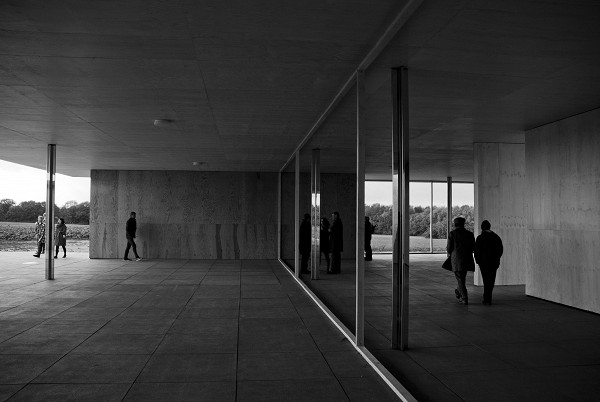 When History Becomes Form by Joan Ockman
Our relationship to the architectural modernity of the last 150 years grows increasingly attenuated. How much has changed in just a few decades! Buildings once touted for their absolute newness survive in our sprawling, chaotic cities like ageing grandparents, posing irksome problems: how to maintain them? how to afford them? can they accommodate contemporary needs? can we contrive new uses to justify their existence?... Read more
Features of the Human Scene. People's Expectations and Architecture by Christophe Van Gerrewey
What people can expect from buildings is not a question that can be answered once and for all, primarily because their mutual relationship changes constantly. Architecture – valuable and life-affirming architecture – is perhaps more expensive and more inaccessible than ever, not so much because the price of materials and building costs are increasing, but because not enough is being invested in buildings accessible to all. That is why, in a... Read more
Encounters with
Maarten Vanden Abeele

Raoul De Keyser: De Dingen Die Ik Zie
Brussels, Belgium
2010–2011
Raoul De Keyser’s oeuvre is permeated by an original, internal and inherently spatial constellation. De Keyser’s paintings do not fit within the Renaissance idiom of a window upon an illusory perspective. The paintings shift, glide, oscillate, overlap and, at times, they also fall. Even when they do in fact suggest an architectonic space, a cabinet for example, there is a certain spatial friction. It is precisely this extremely controlled... Read more
I Fiamminghi a Roma
Brussels, Belgium
1995
Scenography of an exhibition in BOZAR Brussels on Flemish Artists in Rome during the Renaissance... Read more
Huis aan de Kade
Antwerp, Belgium
2018–…
The project Huis aan de Kade - which is part of the larger urban development project Nieuw Zuid - is a U-shaped residential building along the Scheldt. The building block is flanked by an ample amount of greenery: in addition to the public inner garden, the project also has winter and roof gardens. The rather massive façade on the one hand and the light walls of the winter gardens on the other interact to create an overall balanced appearance.&... Read more
BRUSK Exhibition Hall
Bruges, Belgium
2019–2022
‘No space, architecturally, is a space unless it has natural light.’ - Louis Kahn On a site on the Garenmarkt, next to the Groeningemuseum, a new exhibition hall will be erected by the end of 2024 that will house two museum spaces and opens out onto a new park. The exhibition areas will be constructed at a raised level and will be separated from each other by a public passageway (Scala Grande), so that an open, transparent and freely... Read more
Winge Golf and Country Club
Tielt-Winge, Belgium
2011–2014
In the new clubhouse for the Winge Golf and Country Club, the relationship between inside and outside is crucial, as is the merging of the functional and the scenic. The white building envelops the entire environment, like a warm white blanket over the gently sloping terrain. Two separate building volumes are connected by a continuously sloping concrete roof, accommodating all practical functions such as tee-off and practice rooms on the one hand... Read more
Close
Filter by type
Filter by status
Filter by category
Filter by tag