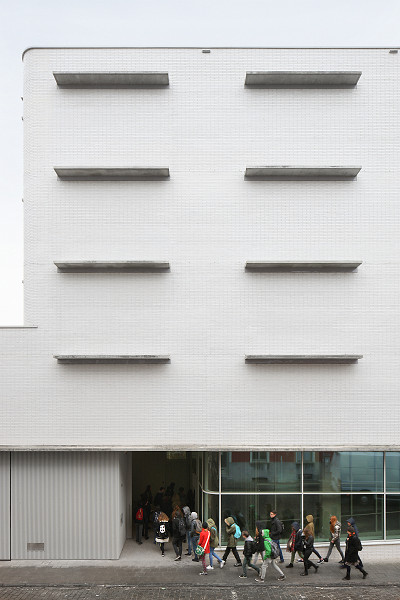 The volume for the State Archives, located in the city center, is meticulously matched to the scale of the surrounding buildings. The sturdy corner building respects the pattern of the street onto which it fronts, while the long horizontal volume behind adheres to the cornice height of the surrounding streets and alleys. At the end of the horizontal wing, the facade is set back from the plot boundary. This makes space available for a small public square in the midst of this dense 19th-century urban setting and extends a welcoming hand to passersby.
The public parts of the building face this more intimate urban space. The glass façade welcomes visitors and leads them to the building behind, where both the administration offices and the public reading rooms are located in relative seclusion. In the reading room, books and archive documents can be consulted under a field of sculptural skylights. In the office space, users look out over the street through large windows. The building thus works in two ways: while the volume creates a sense of openness by receding from the dense urban fabric, the narrow alleyways give the workspaces their special intimacy.
Part of the archive is housed in the corner volume, but the mass of the over 40km worth of archival documentation is stored in two identical underground levels. The underground archive is placed in a doubled concrete shell that forms the foundation of the building and allows for specific climatic conditions to be maintained.
The white brick facades with their pale ceramic layer give the building a light and explicit luminosity in the diverse cityscape and narrow street scene. The rounded edges of the towering corner volume reference Henry van de Velde’s design of the university building a few streets away. The architects transform the massive, closed nature of the archive into a point of interest through the crucial placement of concrete lintels. The concrete elements are applied as a decorative layer to the blind facade and are best understood as a supplement, as a poetic gesture. The lintels – though not accessible and therefore hardly usable – refer to the shelves of the cabinets where the archive documents are kept. They are reminiscent of the architectural sculptures – 'balconies' and 'banisters' – by Juan Muñoz. Despite their apparent superfluity, the ornamental elements are necessary. They give rhythm to the façade and provide an element of scale which makes the façade legible again in relation to the city.
Tags
Interior Office Archive Collaboration Historical City Work environment
Client
Kairos NV
Architects
Robbrecht en Daem architecten
Program
Ghent State Archives
Location
Ghent, Belgium
Date
2010–2014
Status
Completed
Floor Surface
10.777 m2
Team
Paul Robbrecht, Hilde Daem, Johannes Robbrecht, Kim Poorters, Veronique Clarebout, Tom De Moor, Wim Voorspoels
Execution Architect
Arch & Teco Architecture & Planning
Structural Engineering
B.CEC
Services Engineering
VK Engineering
Acoustics
Venac
Landscape
Robbrecht en Daem architecten
Procedure
Design, Build, Finance, Maintain
Contractor
Interbuild
Transport & Mobility
Vectris
Technical Control
Seco 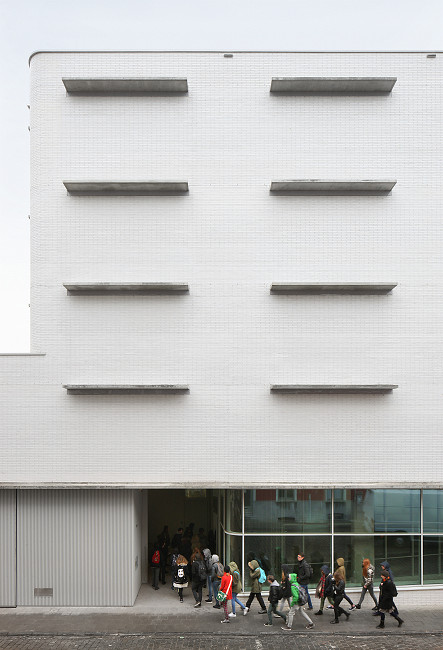 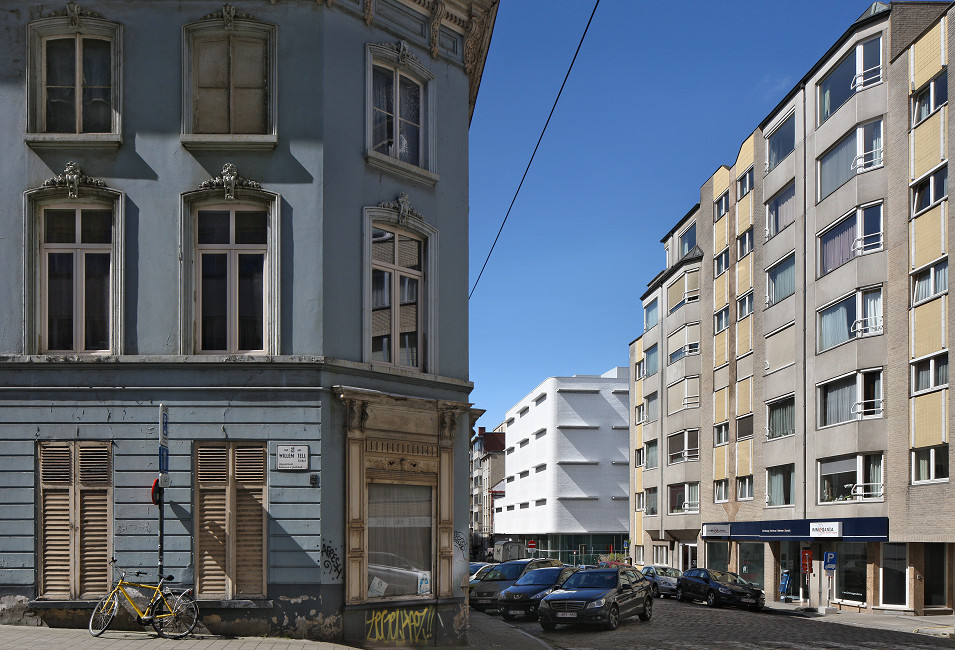 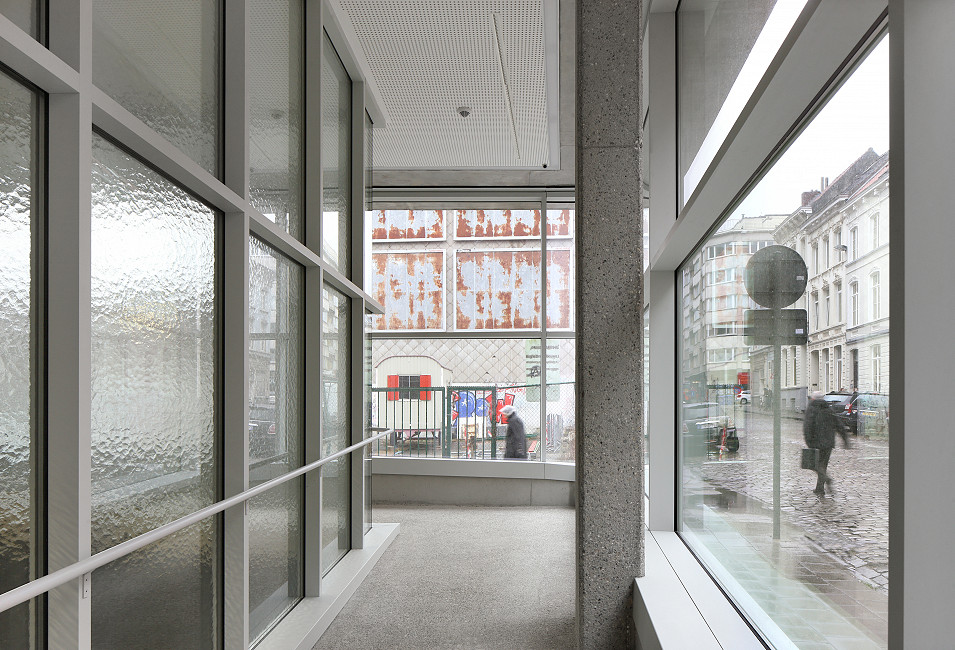 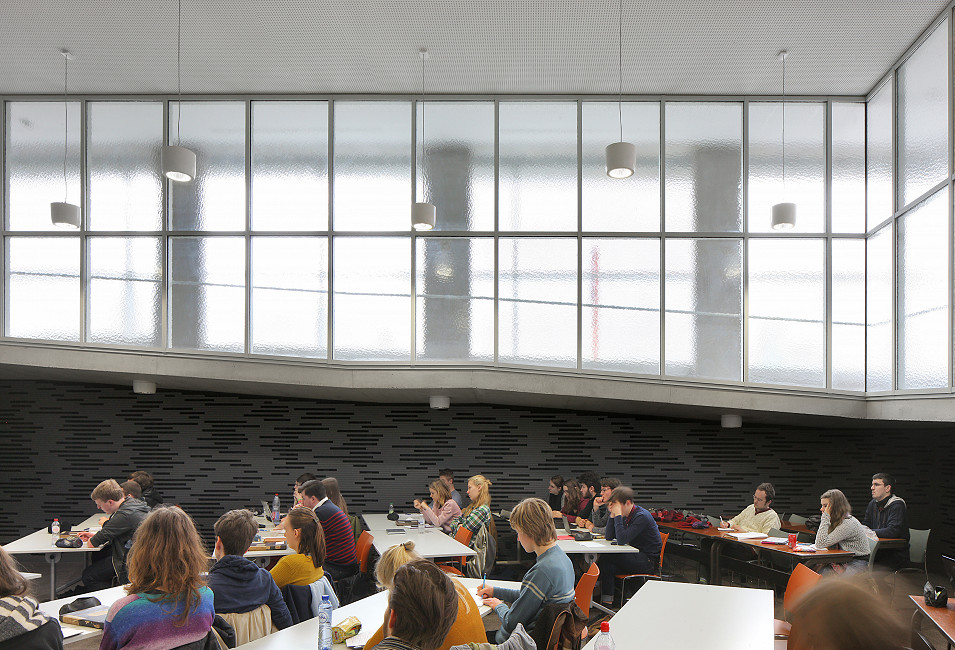 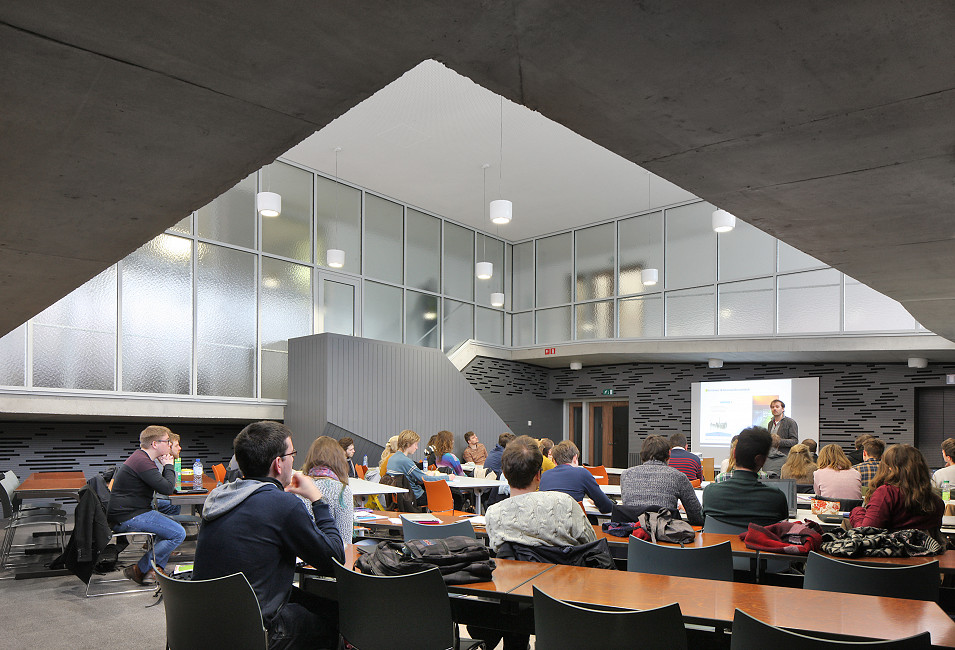 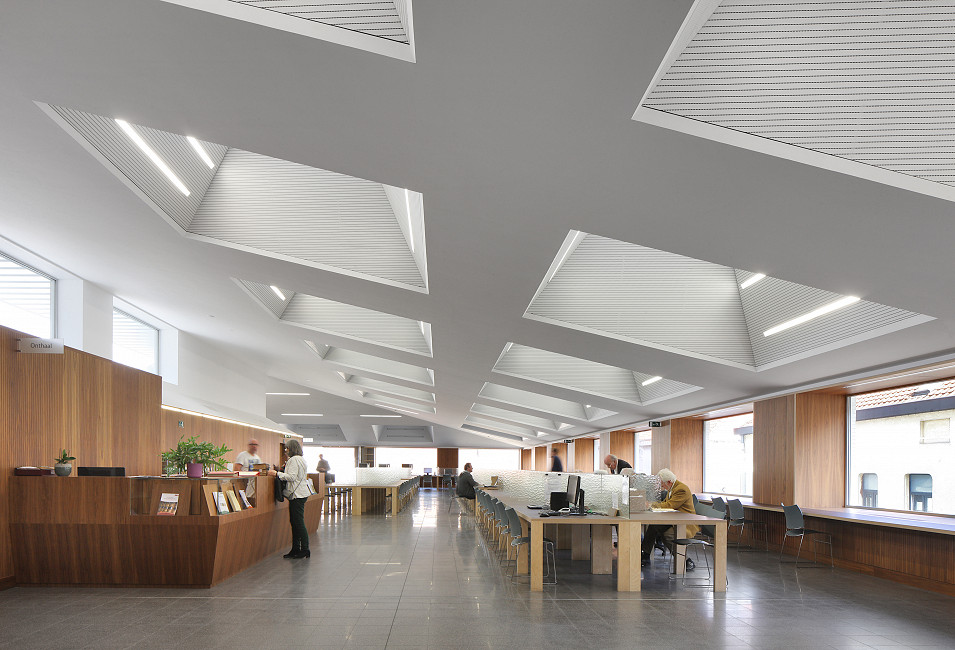 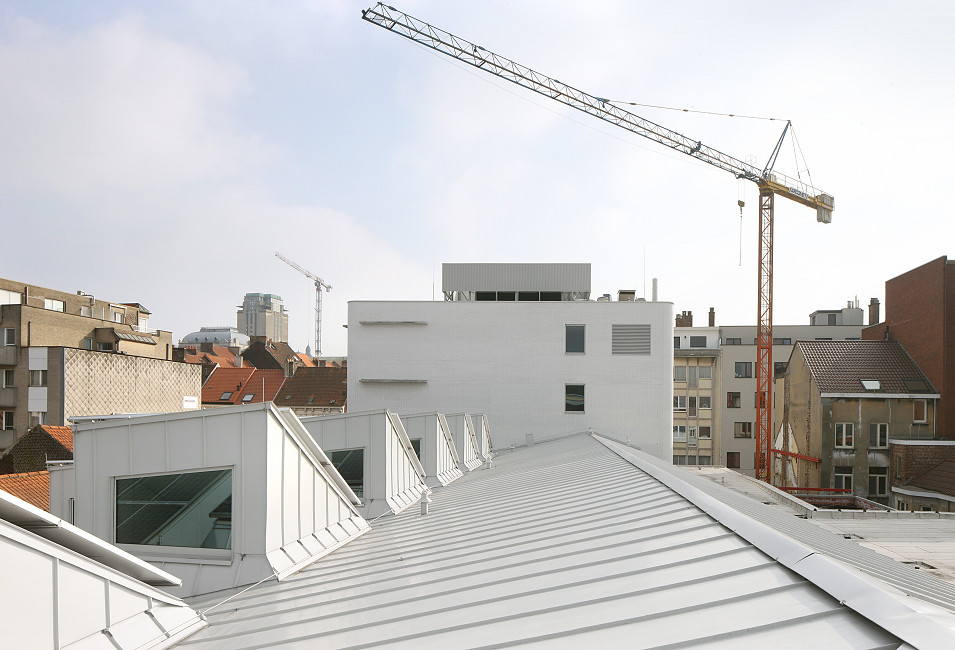 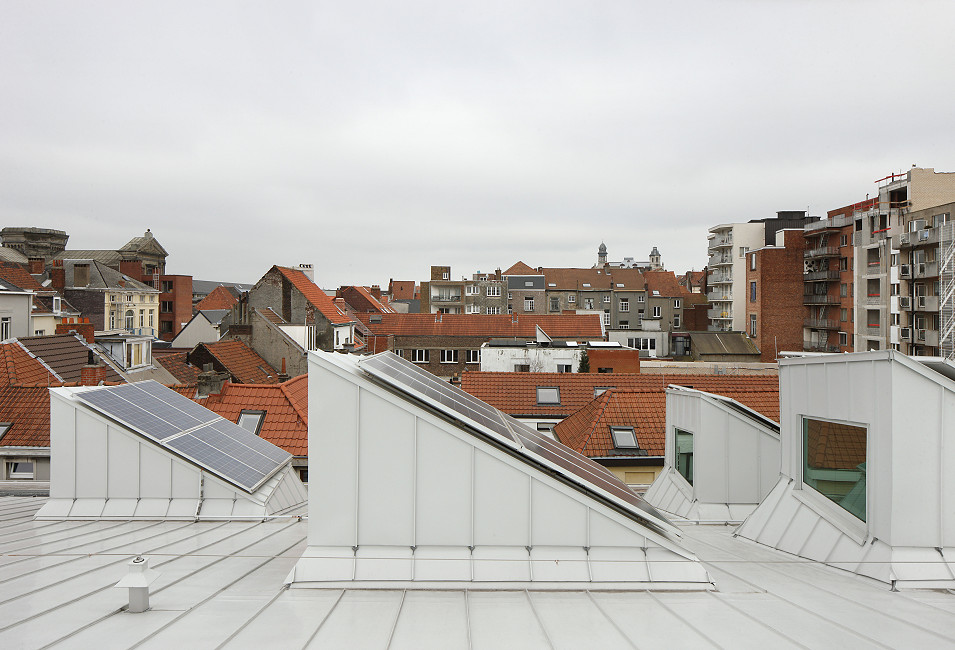 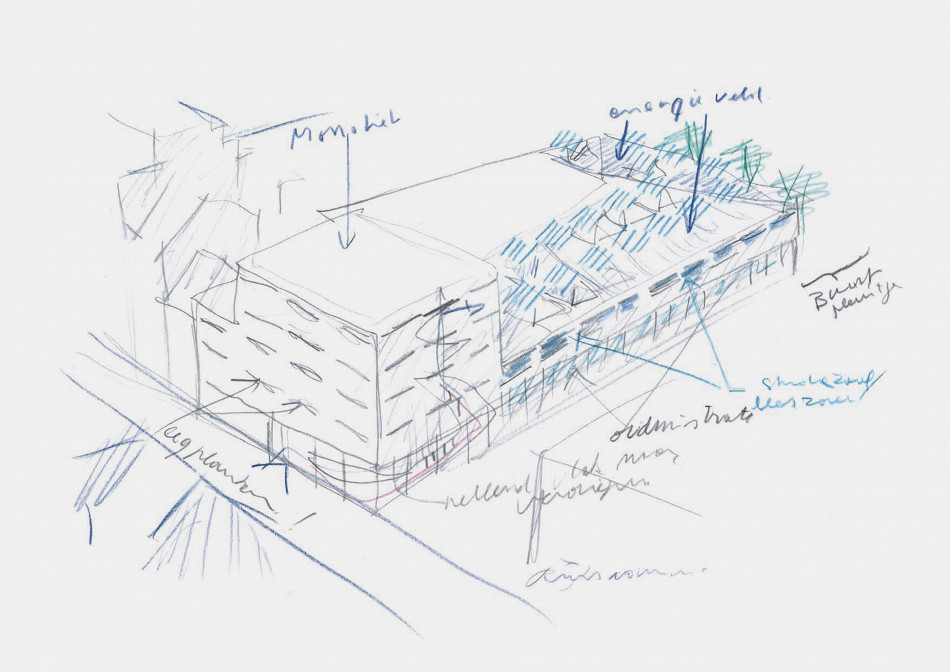 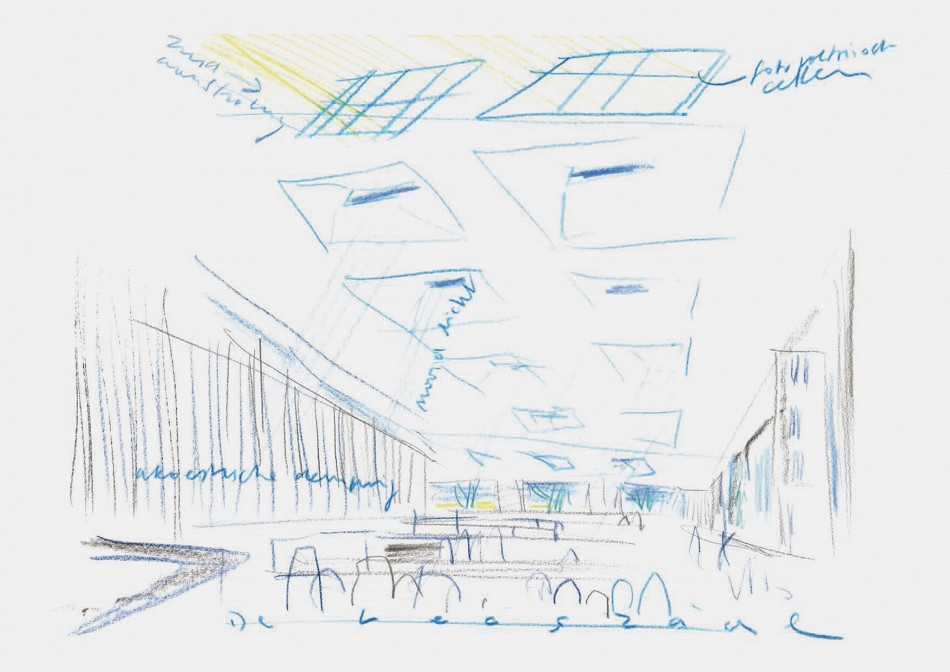 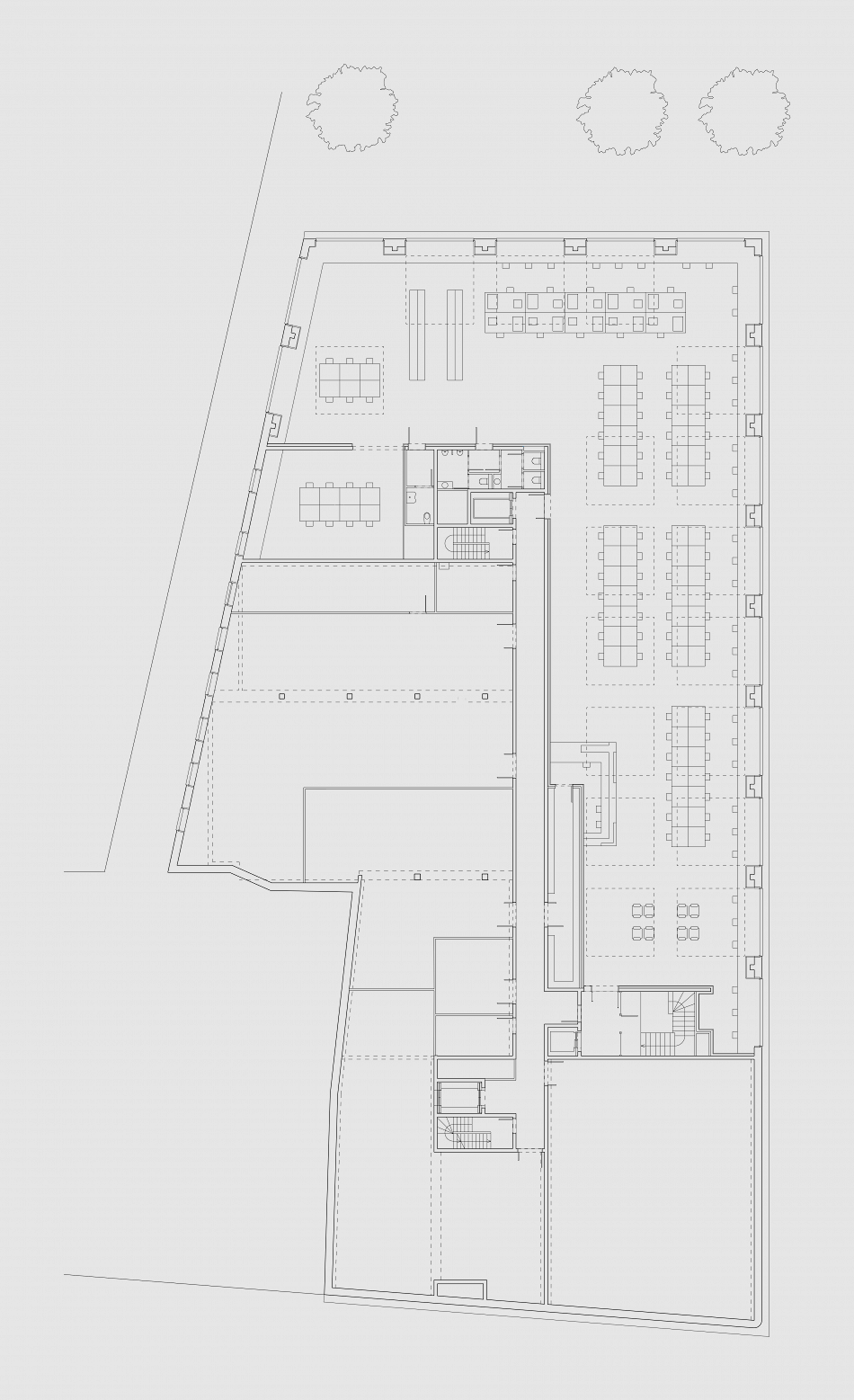 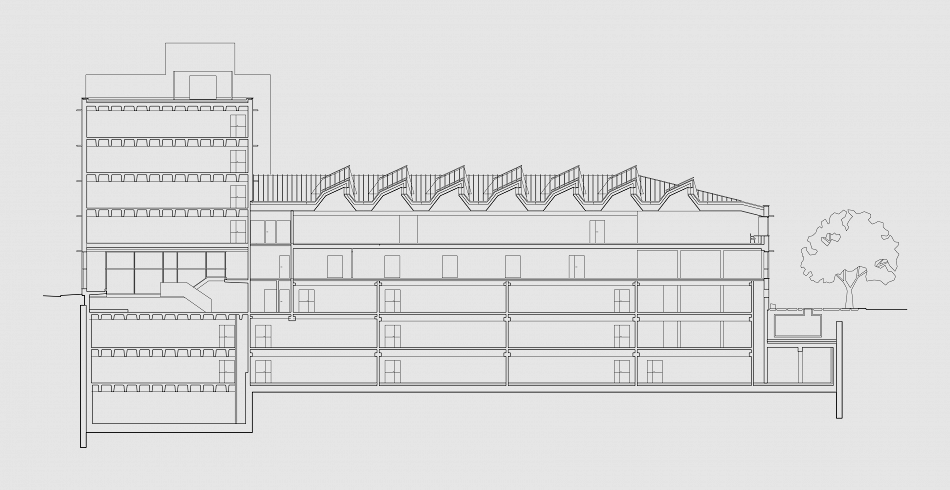 Archives de Bordeaux Métropole
Bordeaux, France
2010–2015
The Halles aux Farines, situated on the right bank of the Garonne, was built along with the construction of the first railway lines and is centrally situated amidst a network of tracks. The former warehouse has been transformed into the municipal archives of Bordeaux, and forms the first link with the future eco-district of Bastide-Niel. The industrial history of the site acquires a new interpretation: the storerooms, where the archive boxes are... Read more
St-Felix Warehouse
Antwerp, Belgium
1999–2006
The Antwerp City Archives are housed in the 20.000 m2 Sint-Felix Warehouse, an icon of historical harbour architecture in Antwerp. The project involved the construction of concrete containers on the upper six storeys, for the conservation of documents from the city’s archives. On the top floor, a new oak roof structure accommodates reading and study rooms around three large, well-lit light wells. Access from the city is via a semi-public... Read more
City Archives
Sint-Niklaas, Belgium
2015–…
In order to arrive at a thoughtful strategy that proves itself to be sustainable and intelligent in the long term, a master plan vision for the entire building block was first developed. The proposition of a new wing offers the opportunity to better organise the entire site, to relieve pressure from the interior block and to complement old and new in a targeted way. The ambition was therefore to increase the quality of the 'building as a whole'... Read more
Campus of the Royal College of Art
London, United Kingdom
2016
The extension of the Royal College of Art at Battersea is a piece of art infrastructure. Free ‘platforms’ for creation allow current and future flexibility. As a terraced extension of the street an additional collective space – ‘the Stoa’, encourages interaction between staff, students and researchers. The hybrid nature of its design makes it the focal emblematic space the whole RCA community can associate with – a new identity... Read more
Rudolf Steiner School
Brussels, Belgium
2017–…
On a picturesque site at the edge of Anderlecht, Robbrecht en Daem architecten will build a new house for the Steiner School Brussels. The design proposes three new volumes built in light wood structure and designed in close harmony with each other. The two longitudinal volumes shelter the classrooms and the third volume welcomes a sports and singing hall. The outside gallery aims to establish connections and sharing between all the classrooms.... Read more
Close
Filter by type
Filter by status
Filter by category
Filter by tag