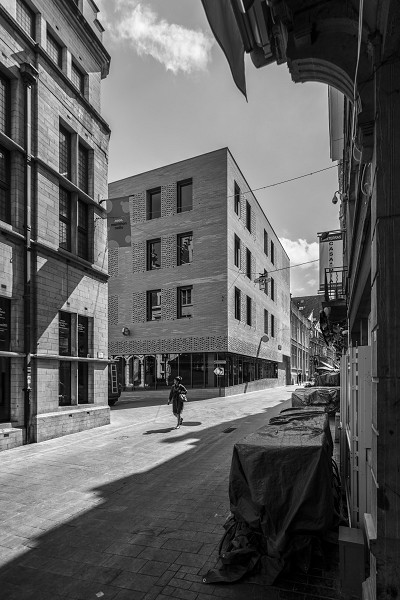 The new Cera building positions itself carefully within the medieval core of Leuven, opposite the side entrance of the historic town hall and close to the Grote Markt. It constitutes the true ‘heart of the city’. Originally the site consisted of a complex conglomerate of buildings with the Hôtel d'Eynatten from 1760, a neo-Gothic wing from 1917 and a corner building in sober reconstruction architecture from 1948. In order to free up space in the existing dense fabric, this corner building and a few less valuable building components were demolished in favour of a new building. The newly constructed section reinforces the historical tripartite character of the project and allows the two older buildings, each with their own specific character and atmosphere, to be even more clearly distinguished from one another. Thanks to a well-considered restoration, these two buildings were given a fully-fledged new purpose, while the new part of the building expressly shows its contemporary identity without confronting its historic neighbours. The entire project found its basis in the colours, refinement and subtlety of the surrounding historical elements and has translated them in a contemporary way.
The dense inner-city context where the project is situated requires a very deliberate integration. Few contemporary buildings of this volume position themselves so peacefully within the old town, weaving amongst, and entering into a dialogue with, the medieval street fabric. The complex is not only located in Leuven's inner city, but also on a site that was completely built up. Additional space was made by inserting three courtyards. The project culminates with an enclosed garden at the centre of the building complex, on the site of the former ticket office. The new facade, like a thin sheet of paper with rhythmical openings, relates to the surrounding buildings through its rectangular cuts. Perforated brick screen elements produce a rich, dappled quality of light. On the ground floor, where the public and private meet, the brick facade disappears with a delicate finish, like a hem of lace.
Tags
Heritage Restoration Extension Office Historical City Adaptive reuse
Client
Cera cvba
Architects
Robbrecht en Daem architecten
Program
offices for the headquarter
Location
Leuven, Belgium
Date
2007–2017
Status
Completed
Floor Area
5.898 m2
Team
Paul Robbrecht, Hilde Daem, Johannes Robbrecht, Veronique Clarebout, Florence Daem, Sofie Deboutte, Arne Deruyter, Valerie De Ketelaere, Kobe Van Praet
Execution Architect
Ar-te
Restoration
Studio Roma
Structural Engineering
Stabo, BAS (Dirk Jaspaert)
Services Engineering
Stabo
Acoustics
Daidalos Peutz
Contractor
Monument Vandekerckhove 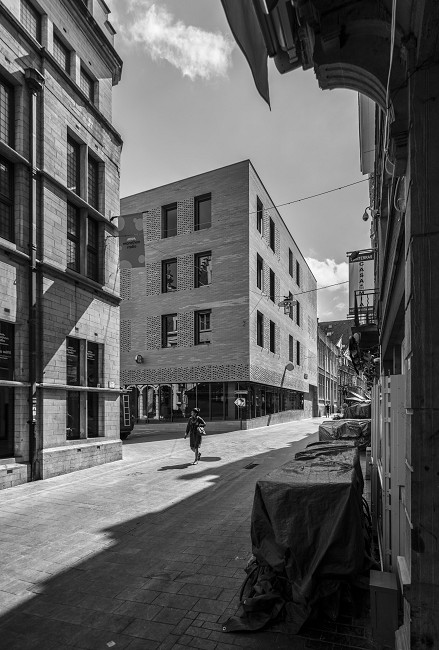 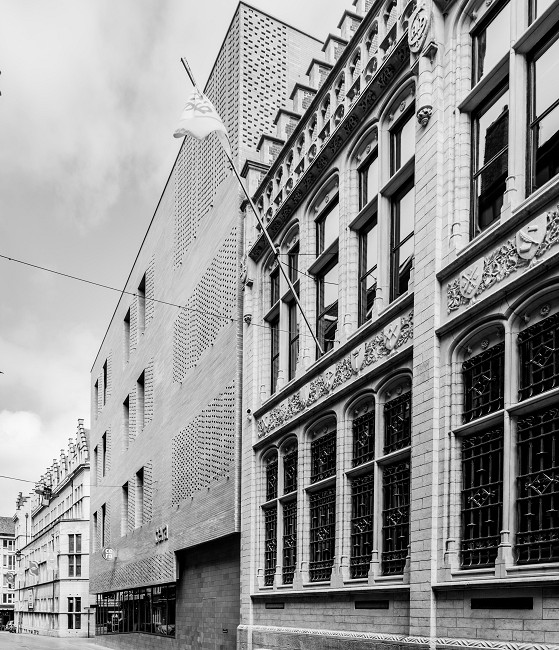 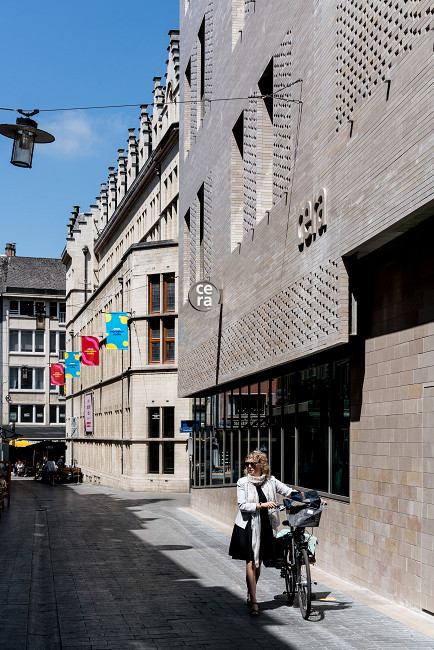 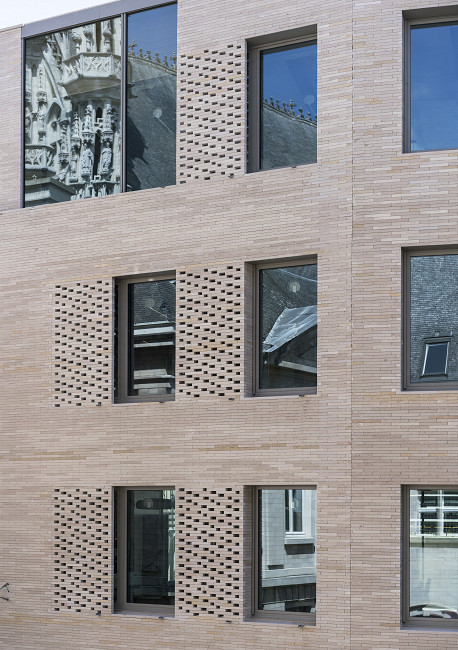 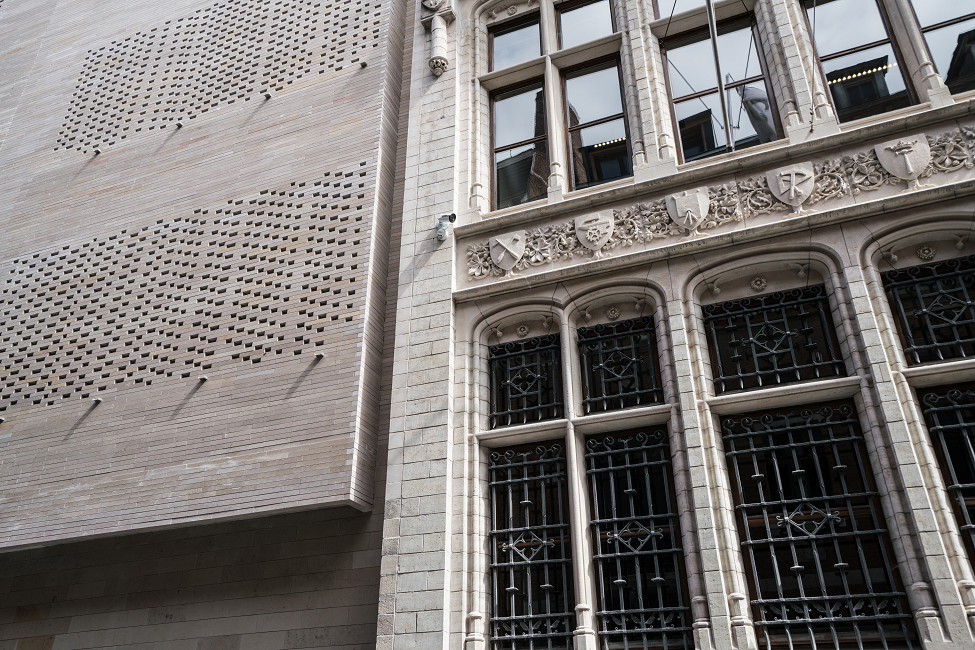 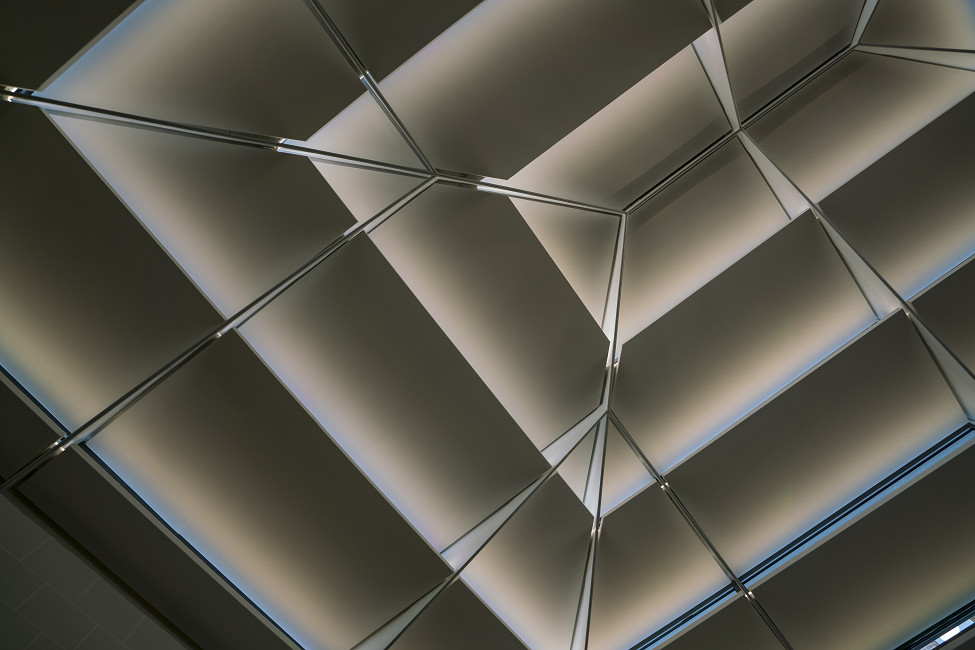 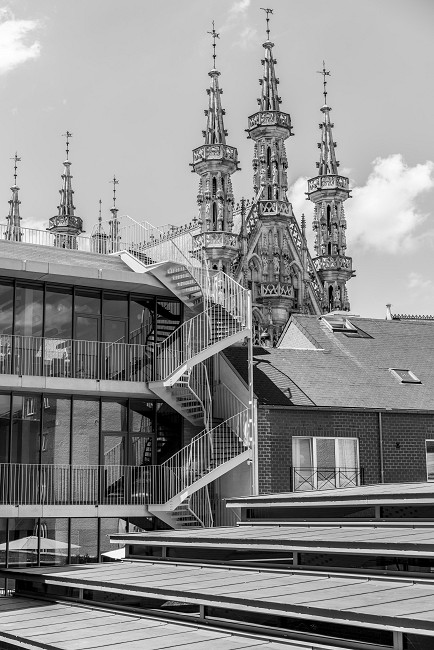 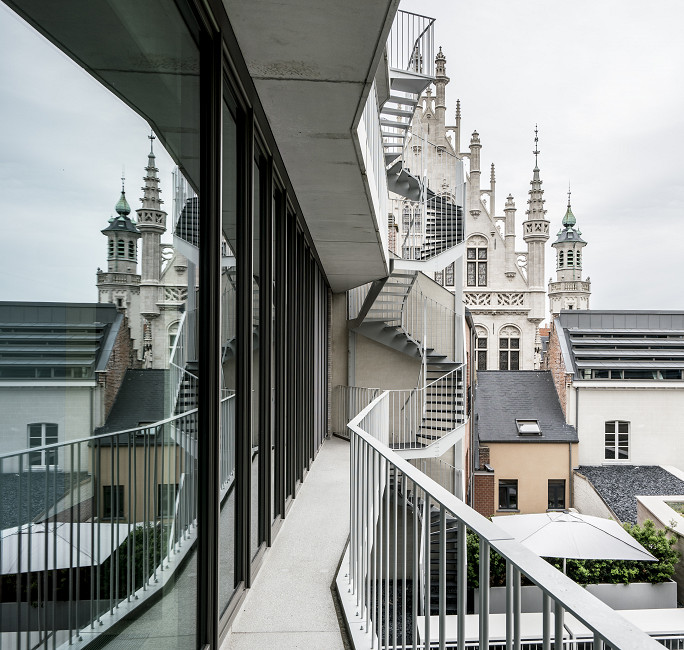 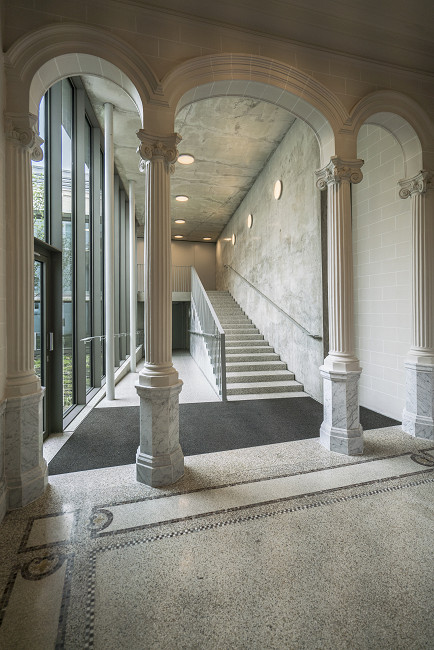 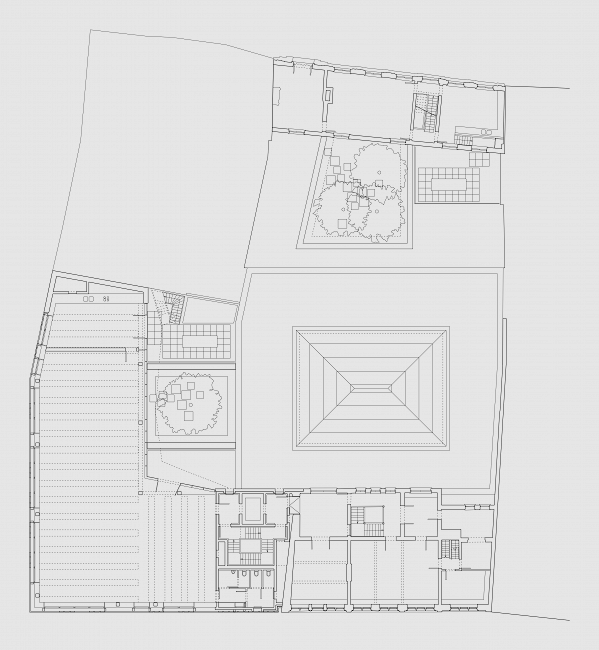 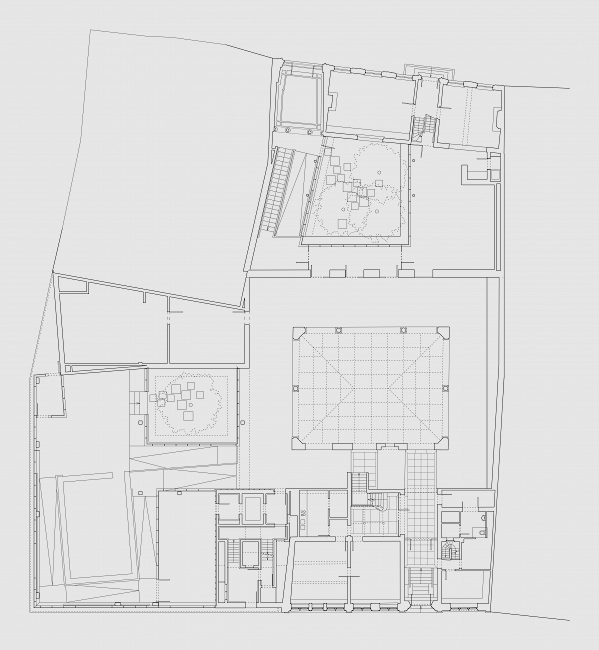 BAC Bank
Kerksken, Belgium
1987–1989
BAC Bank in Kerksken is a local bank branch and is one of the very first projects of Robbrecht and Daem architecten. The building stands on a plot that is grafted diagonally to the street and had to be bordered on one side by a blind facade. The complex geometry of this plot was therefore the basis of the design for the layered facade and the play of perspectives that it creates. With a bus stop on the doorstep, the facade projection gained... Read more
Media Building
Brussels, Belgium
2015–2019
Clad in a crystalline skin of structured glass and brass-coloured anodized aluminium frames, this park building is embedded in the variable topography of its site, with each side responding to a different context. Whereas the long facade addresses the longitude of the park and the frontality of the ‘Ereperk der Gefusilleerden’, a military cemetery for both World Wars, the northern volume anchors the building in the urban fabric... Read more
Le Pin
Pomerol, Bordeaux, France
2007–2011
The storehouse for wine barrels, the ‘Chai à barriques’, is entirely underground and is the heart of the building. This reduces the overall height of the building, which keeps its impact on the surroundings to a minimum.&nbsp;Wine production is carried on in the ‘Cuvier‘ on the ground floor, a functional area spanned by a vault of inclined roof planes. Light enters through windows at the corners. A separate tower houses a reception area... Read more
Stokerij Ateliers and Housing
Leuven, Belgium
2016
Stokerij - the Dutch word for ‘distillery’ - Ateliers and Housing are part of the new urban development of the Dijledelta in Leuven. The Ateliers are located on the site of the former Stella Artois brewery, while the residential area is situated in between the former brewery and an old water tower.The original building of the brewery was a robust brick ruin refined with industrial art-deco details. The design for the renovation and re-... Read more
Katoen Natie VDW
Antwerp, Belgium
2020–…
Located between the many historical warehouses in the ‘Natiebuurt’ and around the corner from their headquarters, Robbrecht en Daem architecten designed this new residential building for Katoen Natie. On the one hand, the design refers to the surrounding 'warehouse architecture', but it also wants to retain the smaller grain and vertical articulation of the existing terraced houses. The staggered cornice emphasises this verticality and... Read more
Close
Filter by type
Filter by status
Filter by category
Filter by tag