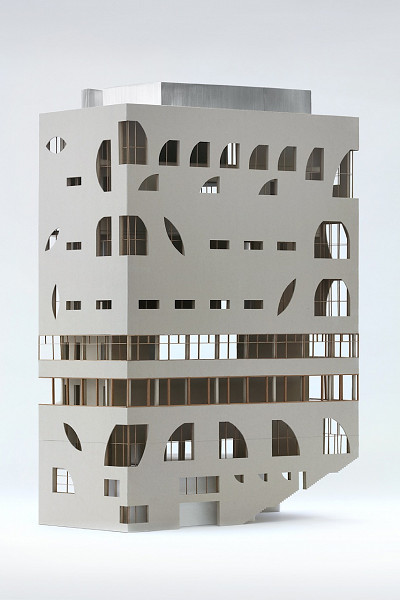 Clad in profiled ceramic panels and anodized aluminium frames, this park building is embedded in the variable topography of its site, with each side responding to a different context.  Whereas the long facade addresses the longitude of the park and the frontality of the ‘Erepark der Gefusilleerden’, a military cemetery for both World Wars, the northern volume anchors the building in the urban fabric.
Divided into a ‘head’ and ‘body’, the volumetric appearance of a tower with a slender horizontal volume emphasises the emptiness between the central event square and the garden theatre. From here a multifunctional pedestrian passage emerges. As a covered space, this passage – call it ‘a square’ – can accommodate a book market, a philharmonic concert, a set for a television show, or simply be a welcome shelter from the rain. The square’s 'emptiness' allows at the same time a wealth of spatial interpretations and connections.
‘Head’ and ‘body’ are almost symbolically connected through one continuous storey, housing the newsroom. At the south side of the building, stacked galleries form an open, non-acclimatized space alternated with open balconies that serve as informal workspaces. These garden rooms - with art integration by Philippe Van Snick - invite employees to work in a different way. The formal workspaces are situated in one continuous volume throughout the upper floors, with alternating double-height ceilings, allowing natural daylight to infiltrate deep into the building. The different television and radio studios are positioned according to their function and use. Some are on the level of the logistic flows. Others are connected to the park and the public lobby or situated in the immediate vicinity of the newsroom. The ground floors of 'head' and 'body' also contain public functions: the bistro, the foyer and the lobby. This urban plinth is intended for all users and flows of visitors and forms the basis for the design of this media building. Through this open character, the project creates a new lively city district. The project was discontinued in 2019.
Tags
Urban Art Tower Office Bar Restaurant Art Integration Cinema View Collaboration Tactility Colour
Architects
Robbrecht en Daem architecten, Dierendonckblancke architecten
Program
Media building
Location
Brussels, Belgium
Date
2015–2019
Status
Design
Floor Area
75 000 m2
Team
Johannes Robbrecht, Paul Robbrecht, Hilde Daem, Wim Voorspoels, Tine Bulckaen, Barbara Deceuninck, Corné Schep, Layla Lavens, Pierre de Brun, Simon Ceuterick, Lennart Vandewaetere, Jürgen Vandewalle, Bert Schellekens, Georges Debelder, Margarida Esteves, Duarte Miranda, Sofie Weytjens, Matthias Decleer, Robrecht Debaillie, Nathan Van den Bossche, Mieke Van der Linden
Execution Architect
Bureau Bouwtechniek NV
Interior Architect
Muller Van Severen, Robbrecht en Daem architecten, Dierendonckblancke architecten
Structural Engineering
VK Engineering, Arup
Services Engineering
VK Engineering, Arup
Acoustics
Arup, VK Engineering
Landscape
Bureau Bas Smets
Facade Engineering
VK Engineering, Arup
Fire Engineering
VK Engineering
Security
Arup
Lighting
Arup 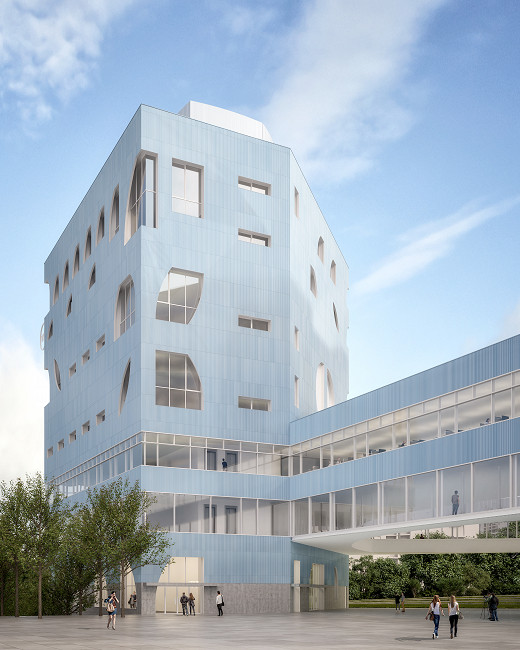 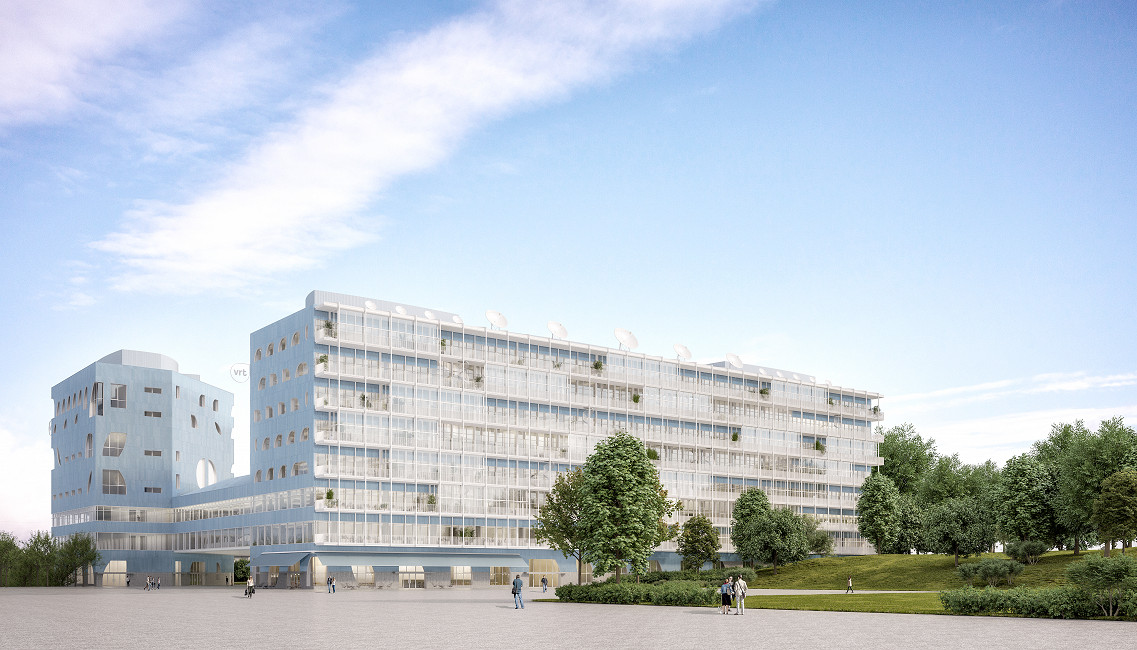 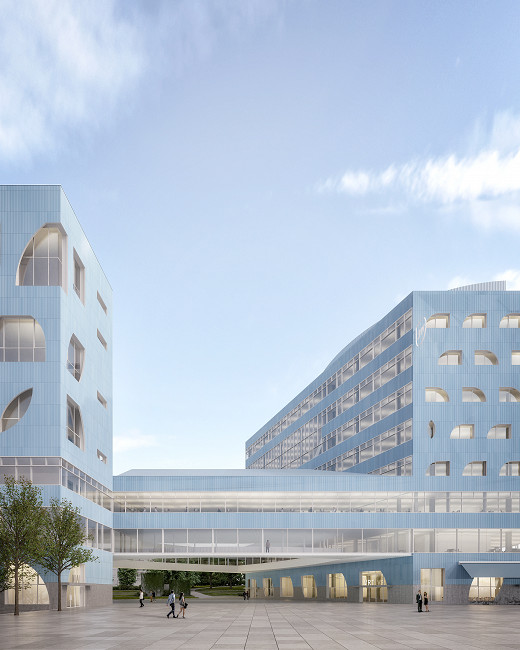 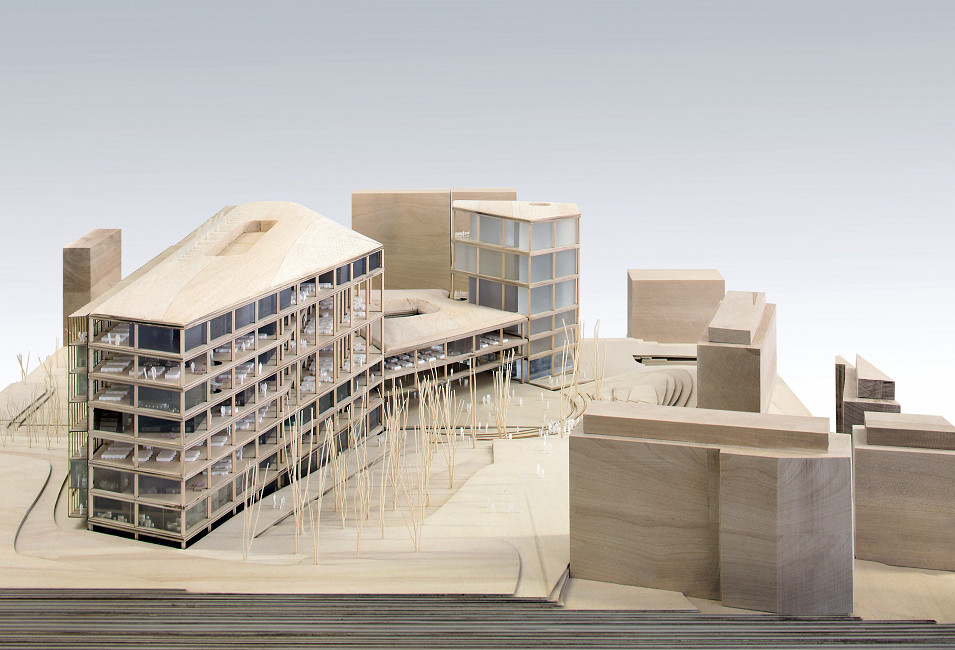 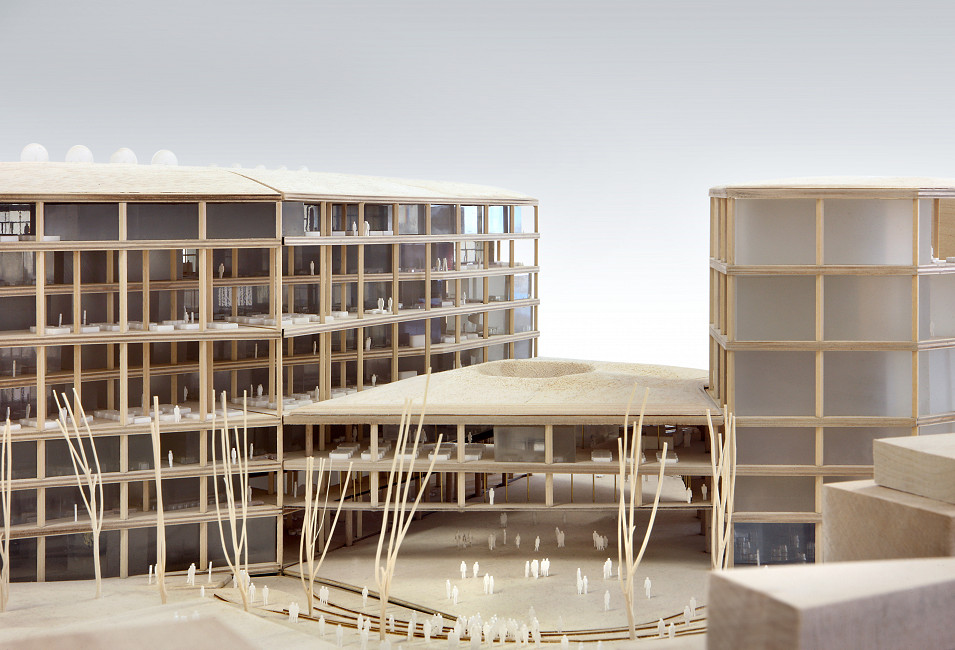 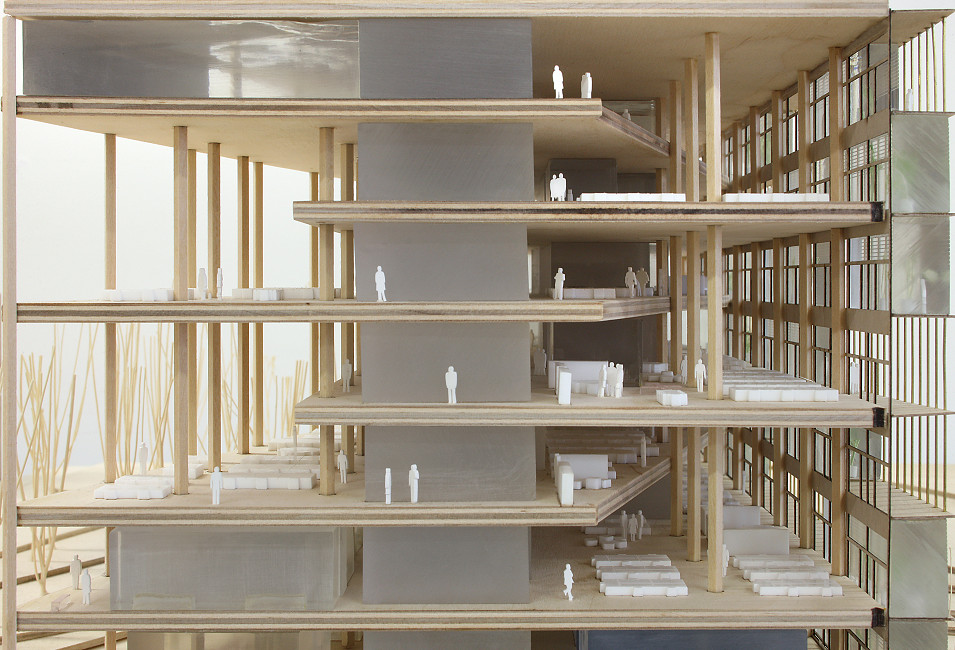 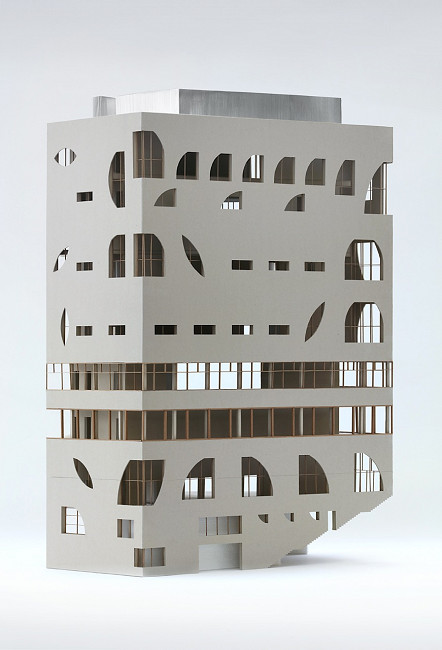 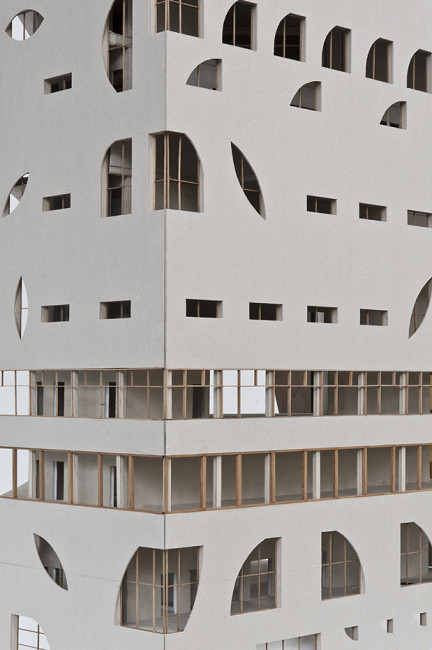 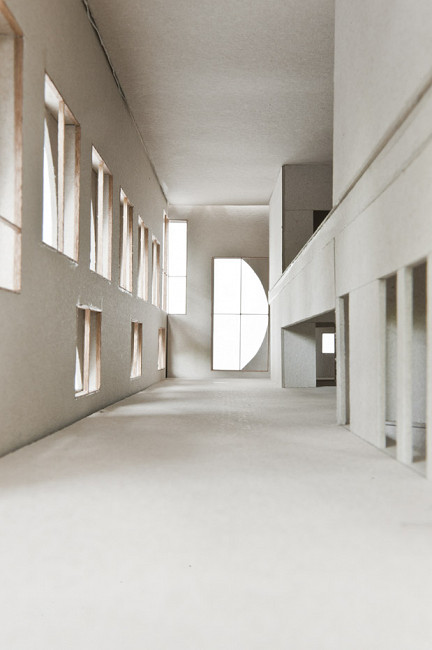 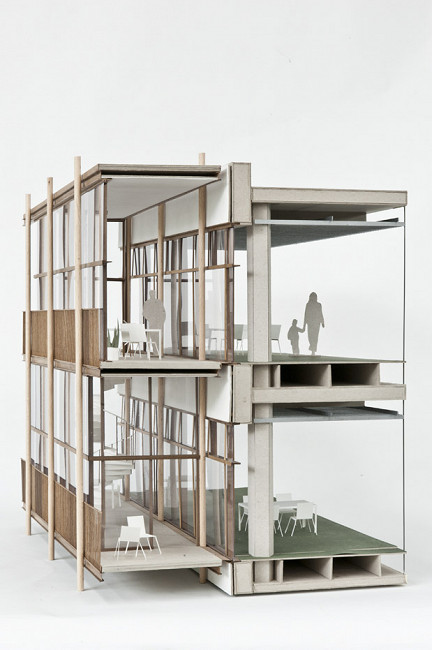 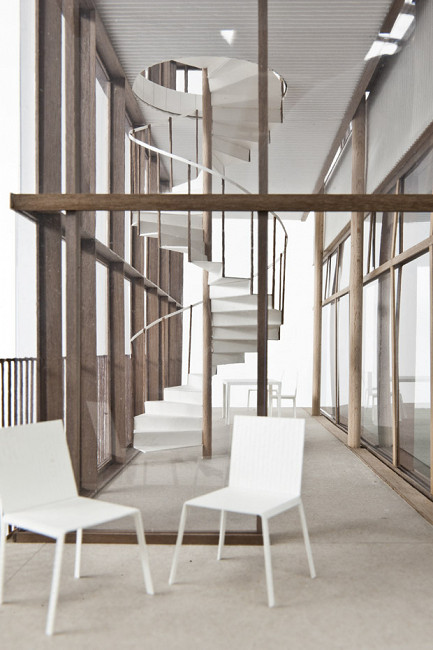 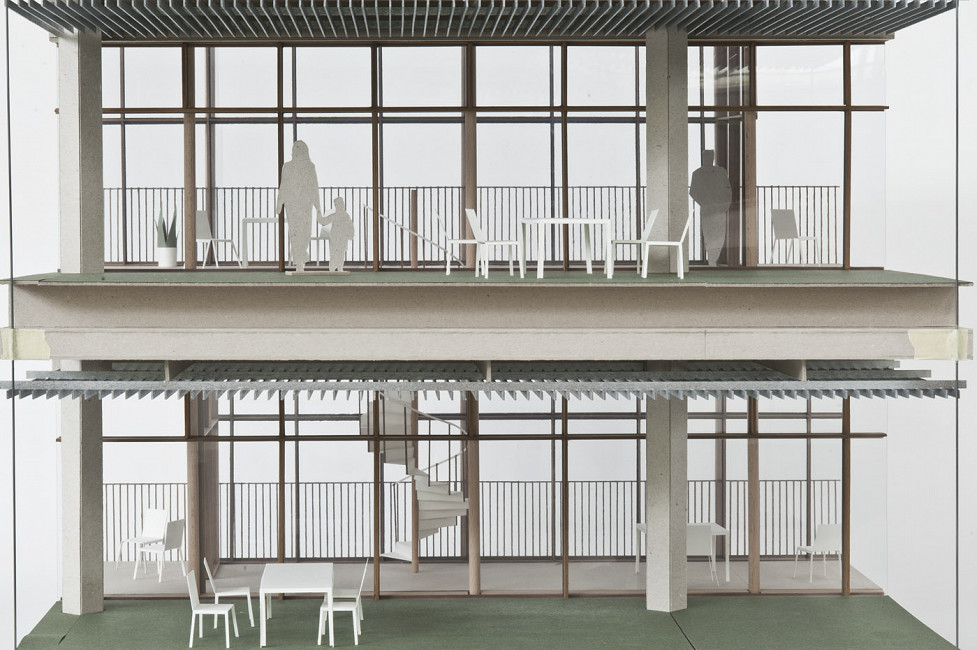 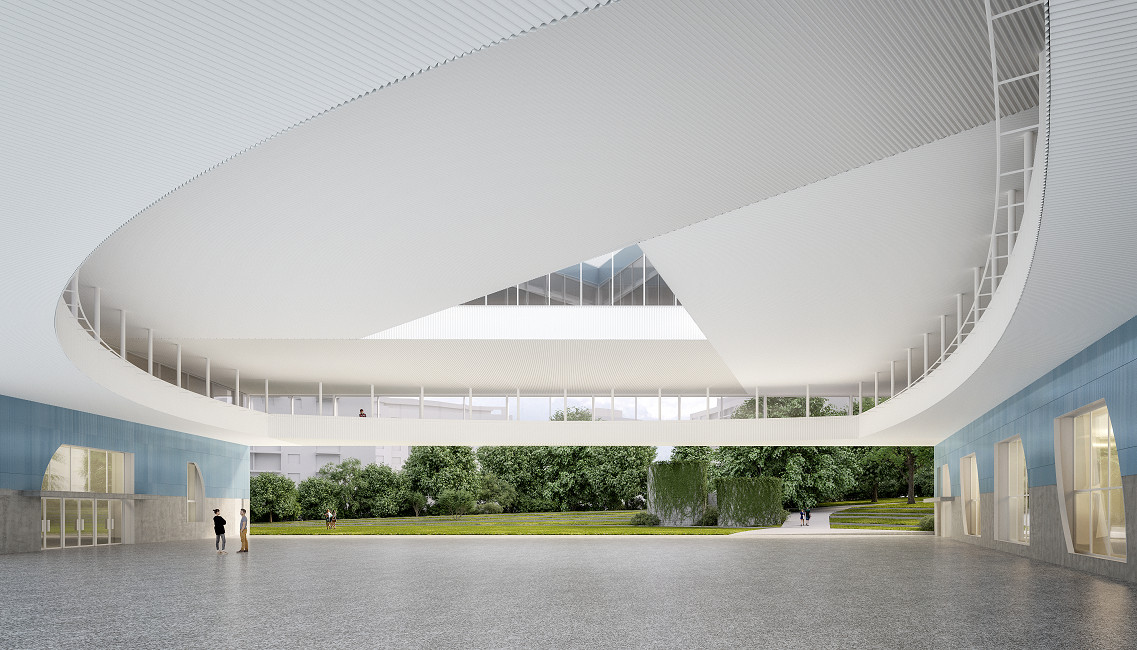 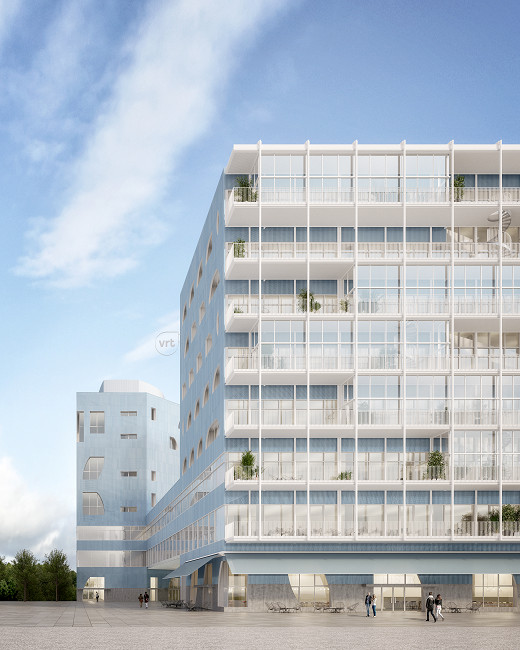 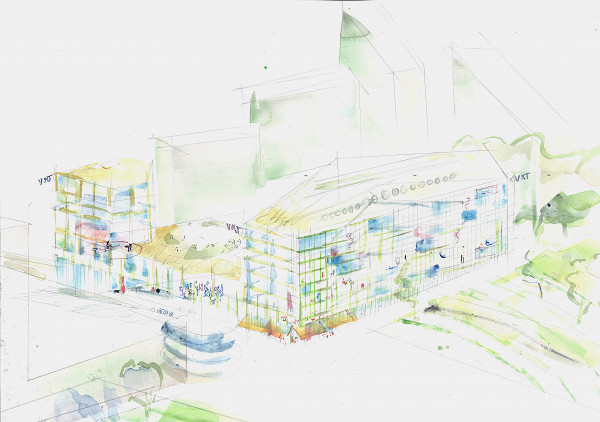 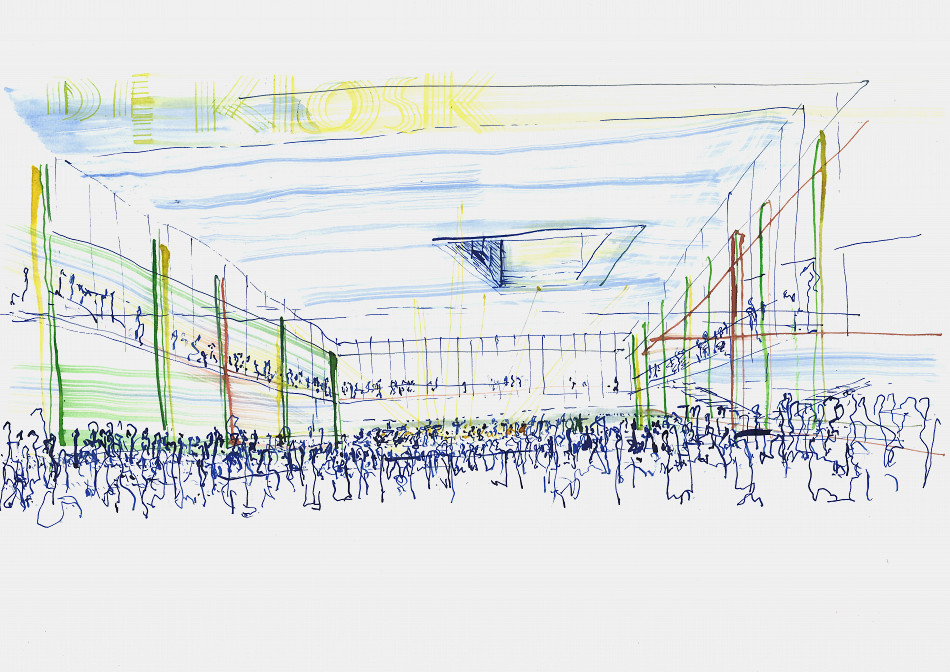 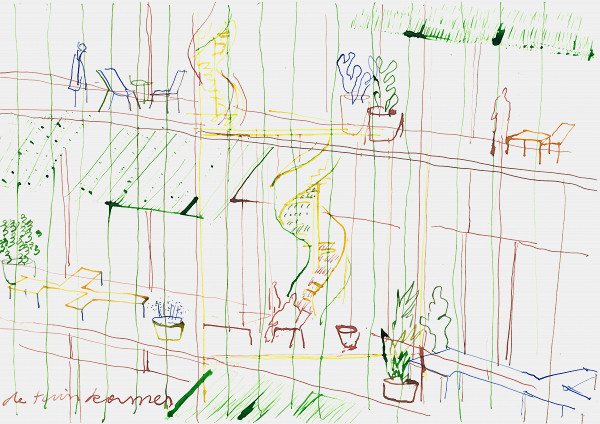 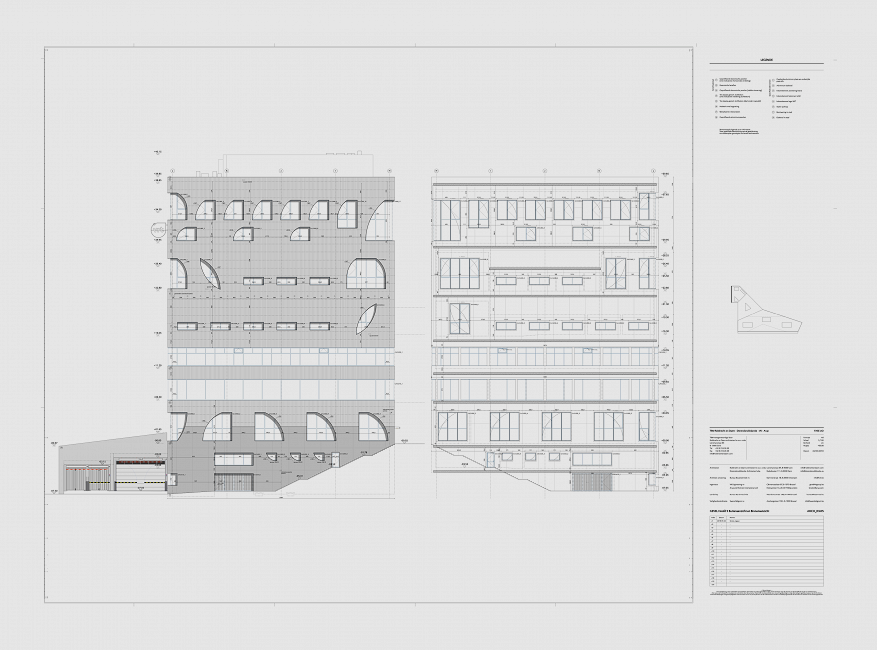 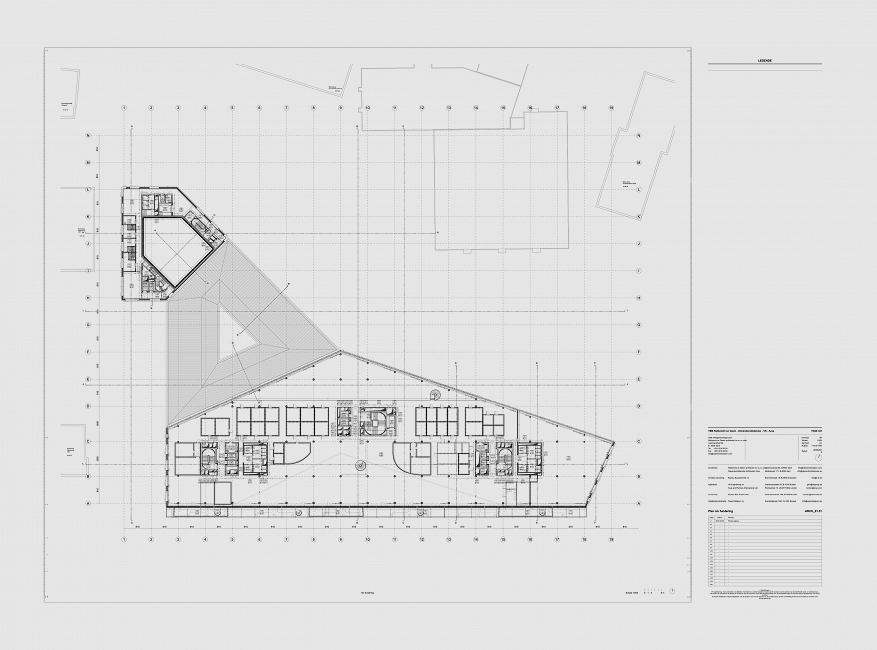 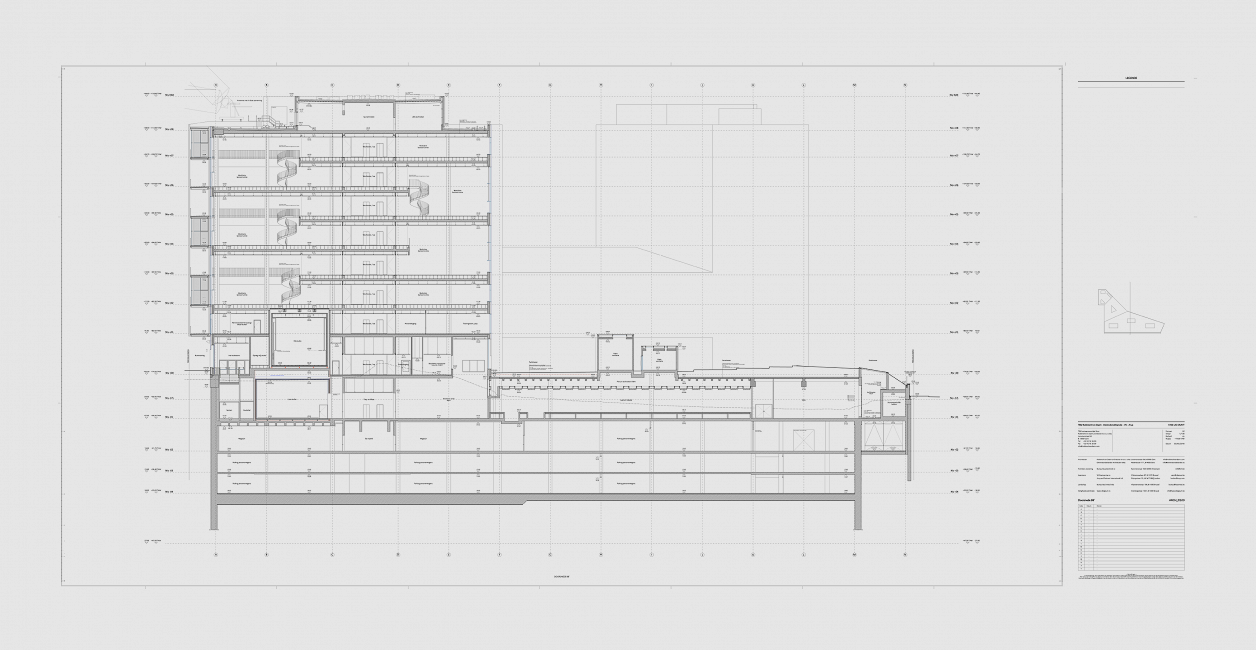 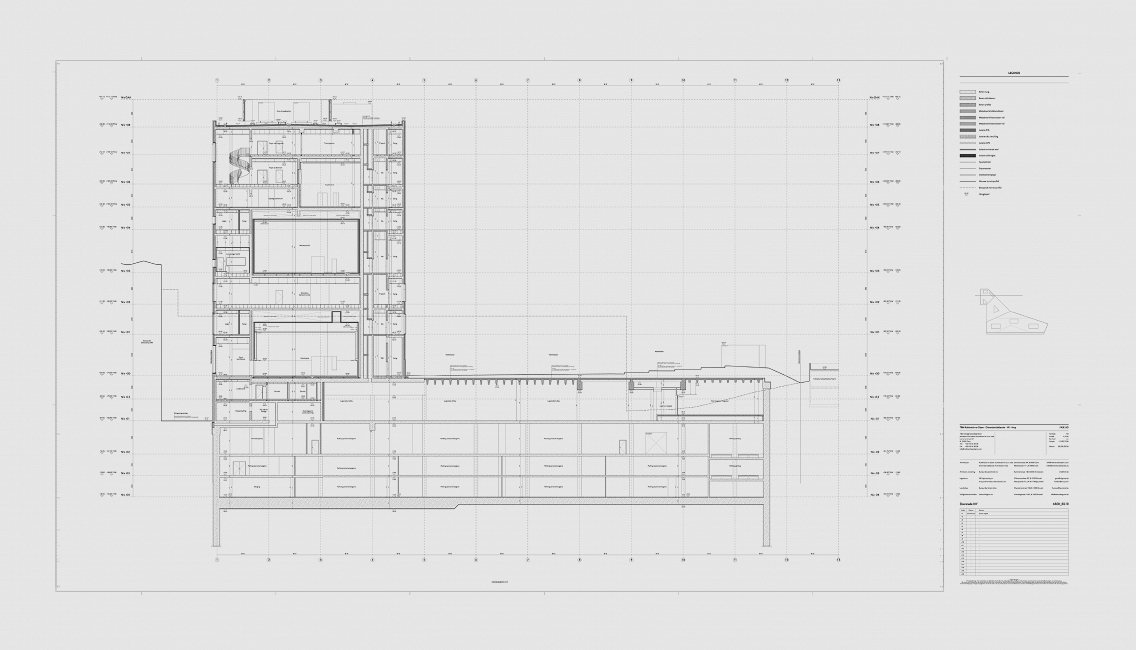 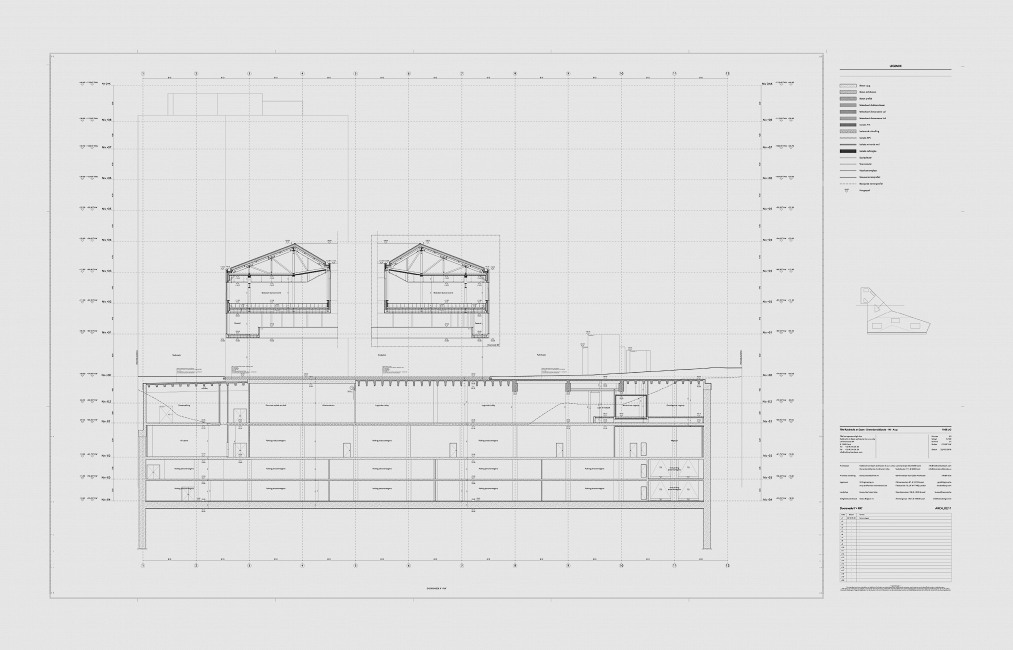 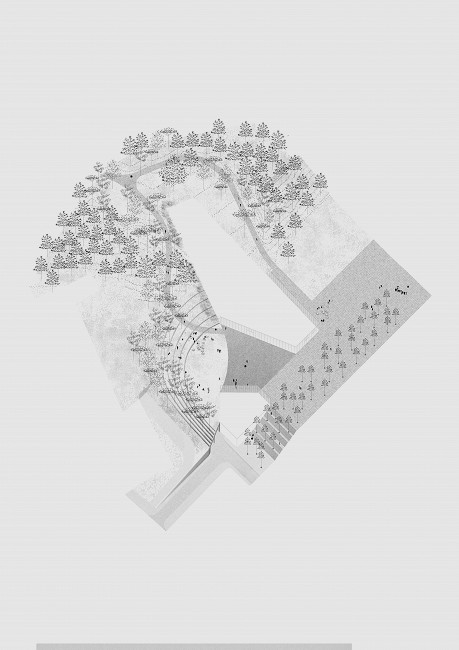 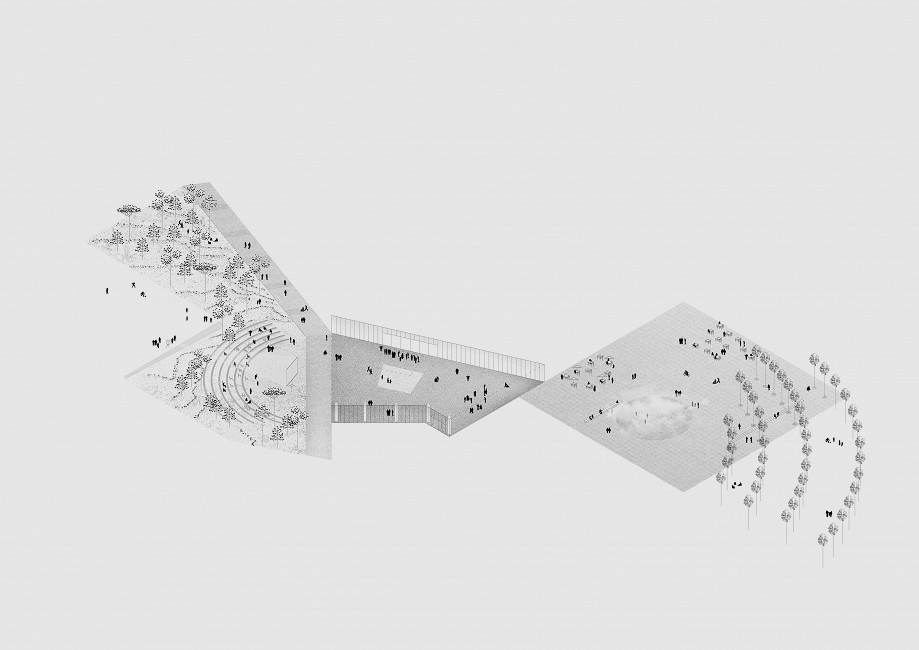 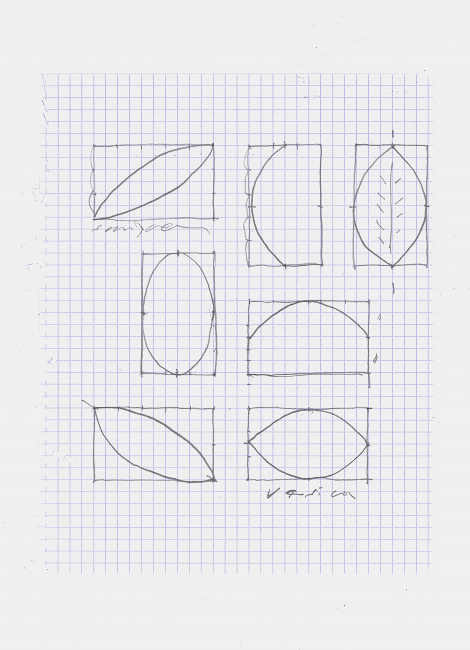 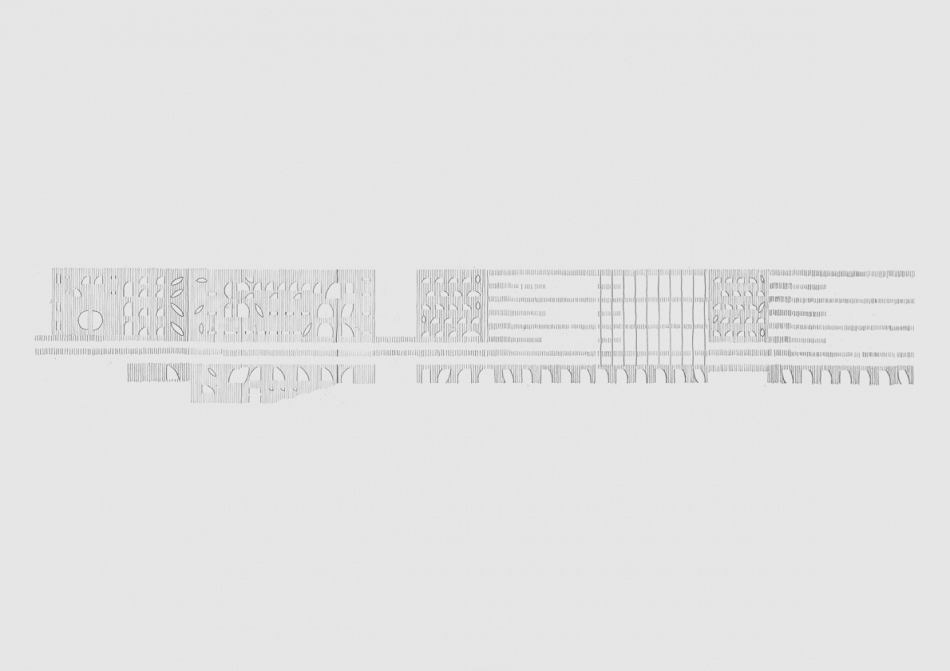 Katoen Natie VDW
Antwerp, Belgium
2020–…
Located between the many historical warehouses in the ‘Natiebuurt’ and around the corner from their headquarters, Robbrecht en Daem architecten designed this new residential building for Katoen Natie. On the one hand, the design refers to the surrounding 'warehouse architecture', but it also wants to retain the smaller grain and vertical articulation of the existing terraced houses. The staggered cornice emphasises this verticality and... Read more
Chamber Music Hall
Gaasbeek, Belgium
2000–2004
A dairy at the foot of the historical castle of Gaasbeek has been converted into accommodation for musicians, with a chamber music hall. The late nineteenth-century front building was transformed into the accommodation; the hall replaces the original small factory shed but adheres to its original outline. The volume is dug deep into a slope into which an open ramp has been cut which then bends over the hall and climbs upwards like a ziggurat and... Read more
Park Abbey
Heverlee, Belgium
2019–…
Park Abbey is a 12th-century heritage site that is undergoing a complete restoration by Studio Roma. For the design of the circulation within the abbey's eastern (and primarily public) wing, Studio Roma called on Robbrecht en Daem architecten. Within this design, two tower volumes with a pentagonal footprint were chosen as circulation cores. The larger tower in exposed concrete is part of the museum route, and the smaller tower in steel serves as... Read more
3 Fonteinen
Lot, Belgium
2017–…
3 Fonteinen is a traditional lambic and gueuze brewery with a long history dating back to 1887. It is known for its adherence to heritage, honest production methods and the place it has held for years in the top 50 best breweries in the world.Today, the brewery is located 'on top of the mountain' in the village centre of Beersel, while the wooden casks are located 'down below' in Lot, next to the Senne. It is in this latter location that 3... Read more
Furniture KMSKA
Antwerp, Belgium
2007–2008
Refurbishment of the entrance hall and auditorium in the Royal Museum for Fine Arts Antwerp (KMSKA). This included the reception desk, benches, signalisation in the entrance hall, lectern, speaker’s desk and the separation wall in the auditorium.... Read more
Close
Filter by type
Filter by status
Filter by category
Filter by tag