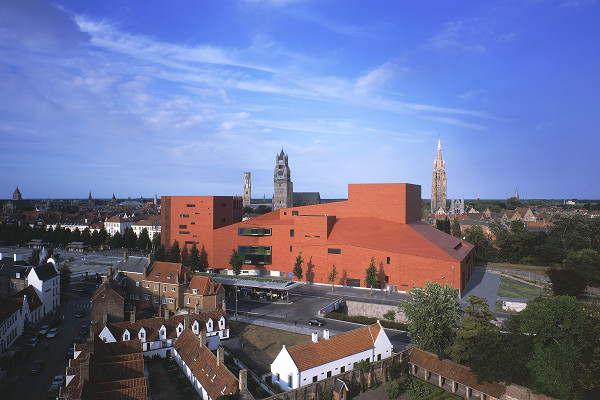 On ‘t Zand, an open urban space near the station in Bruges, Robbrecht and Daem built a concert hall for Bruges when it was the Cultural Capital of Europe in 2002. Alongside the Halletoren, the Church of Our Lady and St Salvator’s Cathedral, this ‘Concertgebouw’ has become a landmark when driving into the city. A uniform external cladding in terracotta tiles hangs like dignified drapery over the volumes of the concert hall, fly tower and lantern tower, and accentuates the monolithic mass of the building. The concert hall, with its 1.300 seats, can be converted into a theatre for musical productions. The lantern tower contains a remarkable chamber music hall where about 320 people can look down on the musicians on the floor or look out over the city from seating in a rising spiral.
The Bruges Concertgebouw anchors its site and consolidates a previously frayed edge, to establish a new landmark when entering the historic city. Its dynamic form is visually distinct from its context and yet works in conjunction with it, both spatially and materially, to establish a coherent sequence of urban spaces. A uniform exterior cladding of terracotta tiles hangs like dignified drapery, bringing together the widely varying volumes required by the building’s programme and drawing them into dialogue with both domestic and infrastructural neighbours. With outstanding acoustics, it 1300 seat main auditorium offers a flexible environment for opera and classical performance that nonetheless succeeds in creating a very specific atmosphere; defined by sloping timber panelled walls, the curving, rhythmical forms of cast plaster balcony fronts and the two high level windows that cast rays of sunlight deep into its interior. A second chamber space, for 350 people, is an innovative multilevel performance environment that can also act as part of an extended foyer sequence, allowing new audience / performer relationships to be explored.
Developed in collaboration with Arup Acoustics, the Bruges Concert Hall houses two auditoria, connected by a dynamic sequence of foyer spaces. The route through the foyers forms a promenade architecturale, arranged around a void in a manner that recalls Hans Scharoun’s Berlin Philharmonic. Adjacent to the entrance, at the start of this sequence, the 350 capacity chamber music hall takes the form of an inner court around which one can walk, with open boxes rising in a spiral. This original space offers new challenges and opportunities for musicians, in dialogue with their audience. The main 1300 seat concert hall can be converted into a theatre suitable for operatic productions, utilising moveable stage towers that create an orchestra shell within a larger stage and fly tower. The form of the hall is analogous to that formed when someone cups their hands round their mouth to make their voice carry further. Developed through exhaustive study with Arup’s acousticians, this unusual, dynamic form offers exceptional acoustic qualities, producing a synthesised yet analytical sound. To create intimacy, the maximum distance from stage to listener is 30 metres, while angled side-walls of serrated plaster panels enhance the sense of involvement with the stage.
Tags
Interior Bar Art Integration Chamber Music Hall Theatre Natural Daylight Cinema View Sculpture Historical City Colour
Client
Concertgebouw Brugge vzw
Architects
Robbrecht en Daem architecten
Program
concert hall, fly tower and a chamber music hall
Location
Bruges, Belgium
Date
1998–2002
Status
Completed
Floor Area
17.250 m2
Team
Paul Robbrecht, Hilde Daem, Piet Crevits, William Mann, Wim Walschap, Matthias Baeten, Gilberte Claes, Els Claessens, Sofie Delaere, Jan D'haenens, Brigitte D'hoore, Shin Hagiwara, Michel Seeger, Gert Swolfs, Pieter Vandendries, Freddy Maenhoudt
Art Intervention
Dirk Braeckman, Luc Tuymans, Philip Van Isacker, Peter Verhelst
Project Manager
Coördinatiebureau De Brock
Structural Engineering
Studium
Services Engineering
Ingenium
Landscape
Wirtz International
Acoustics
Arup Acoustics
Contractor
Jan De Nul
Nominations / Awards
2003 – Nomination European Union Prize for Contemporary Architecture – Mies van der Rohe Award
Technical Control
Seco
Consultant
Van Assche & Van Langenhove 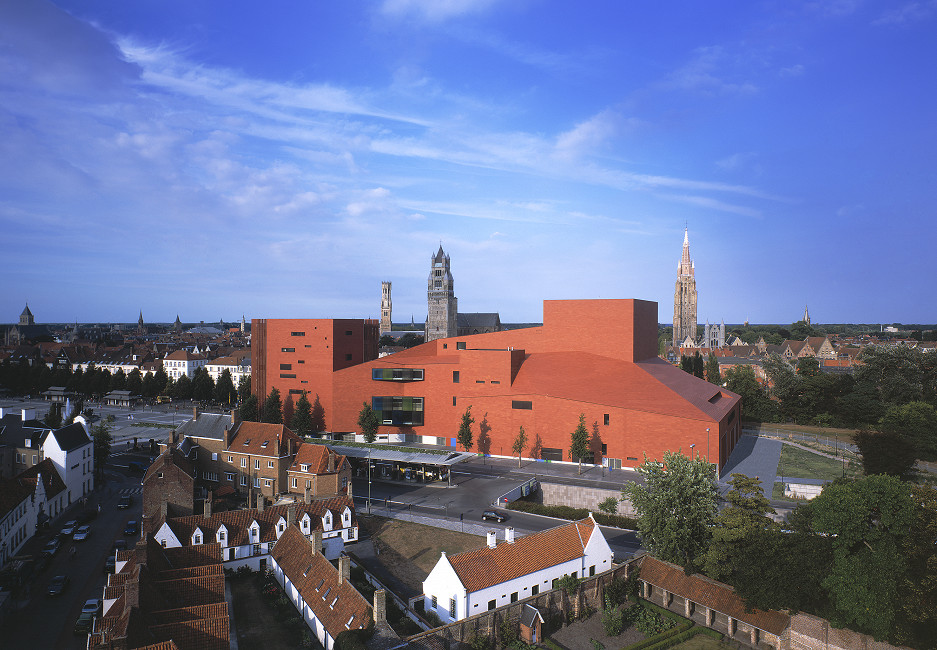 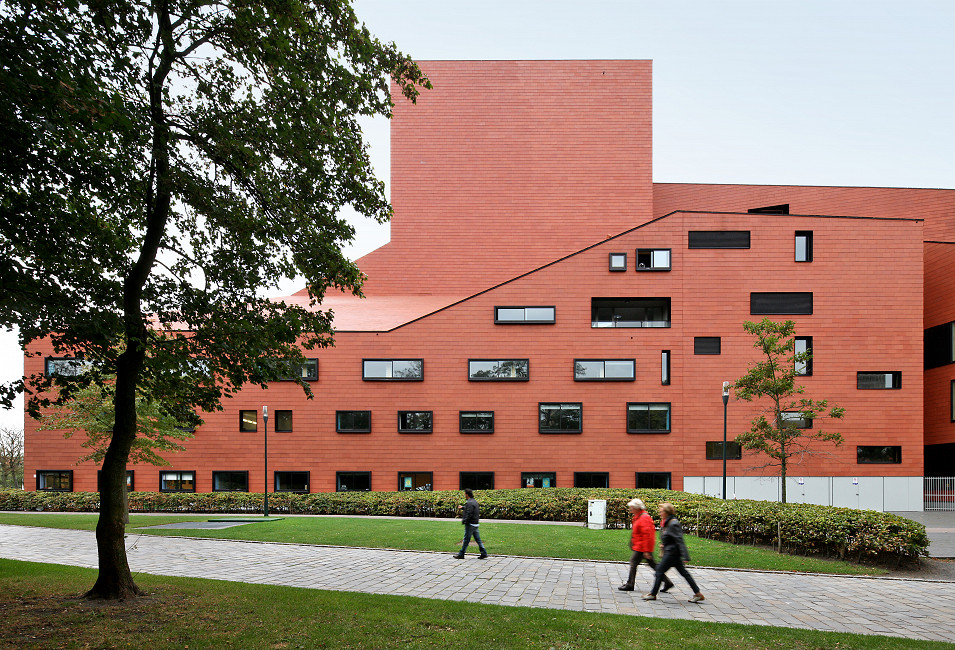 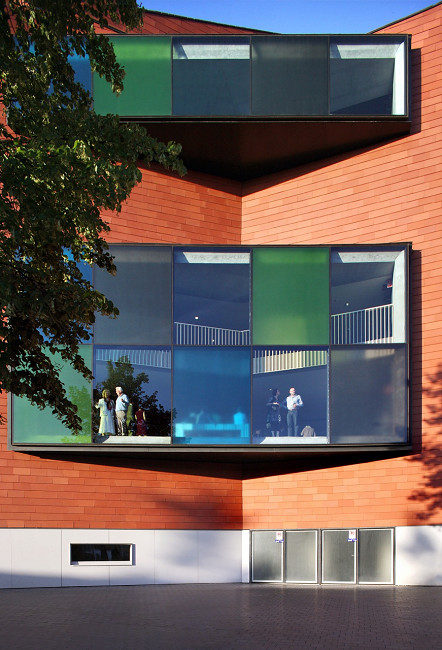 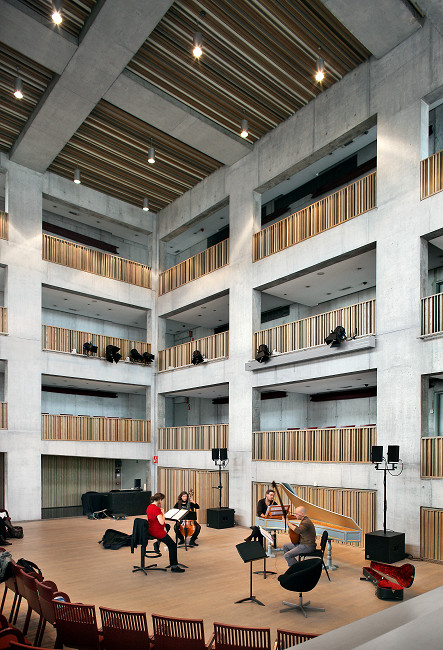 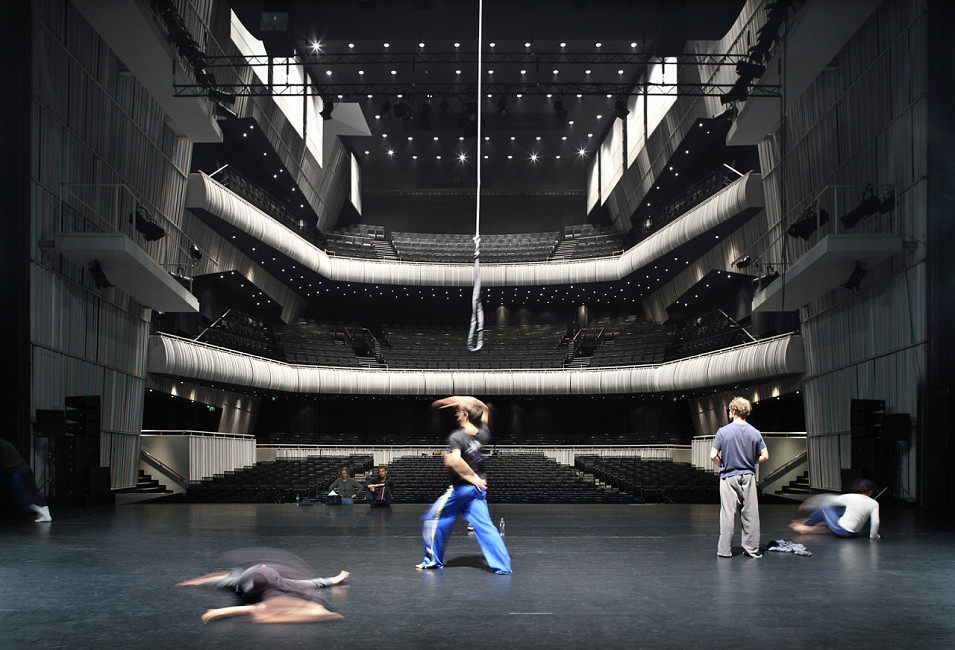 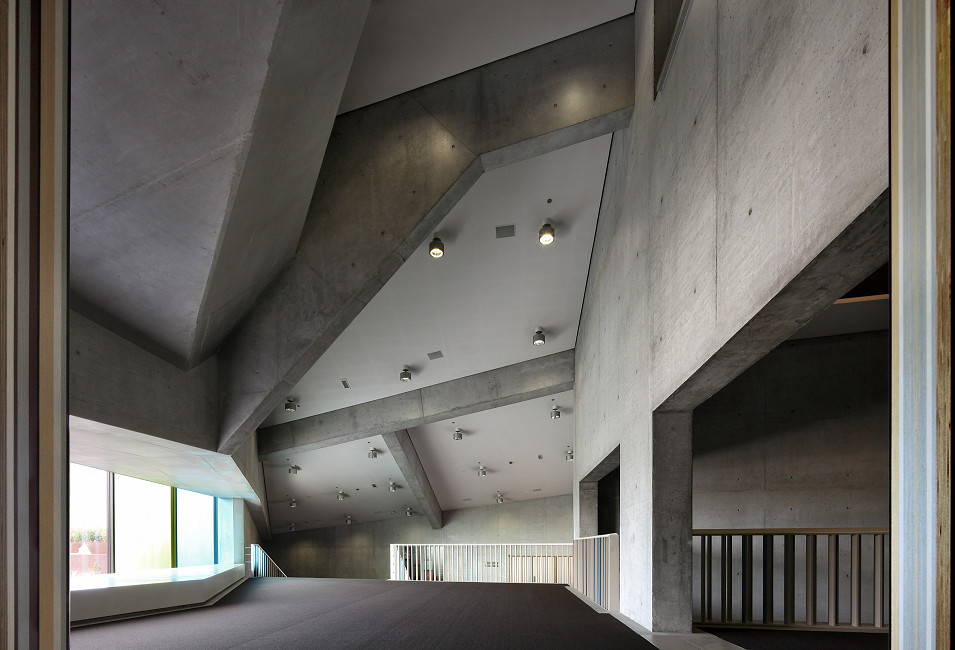 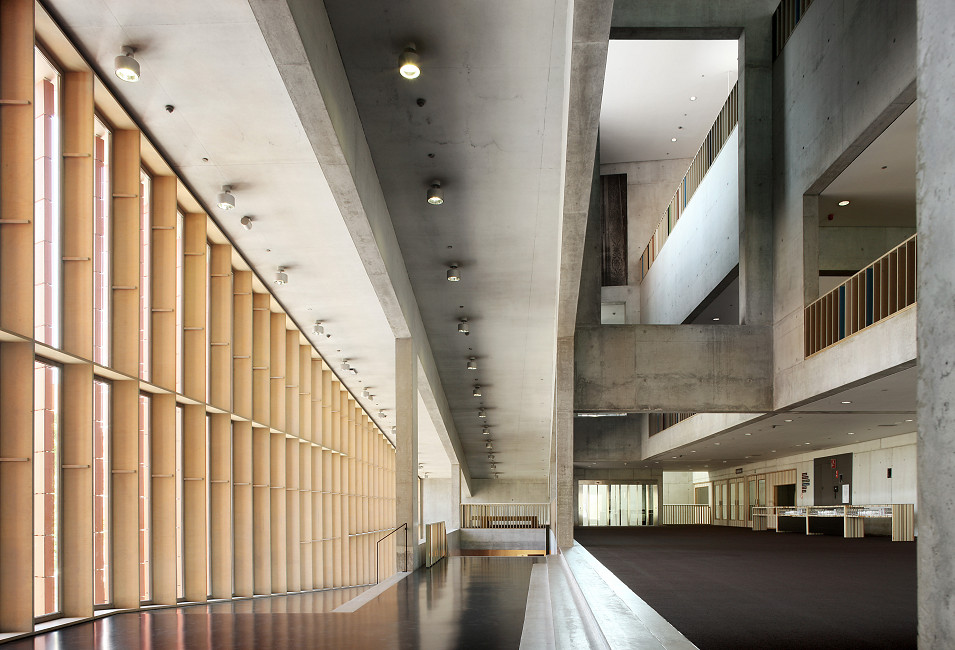 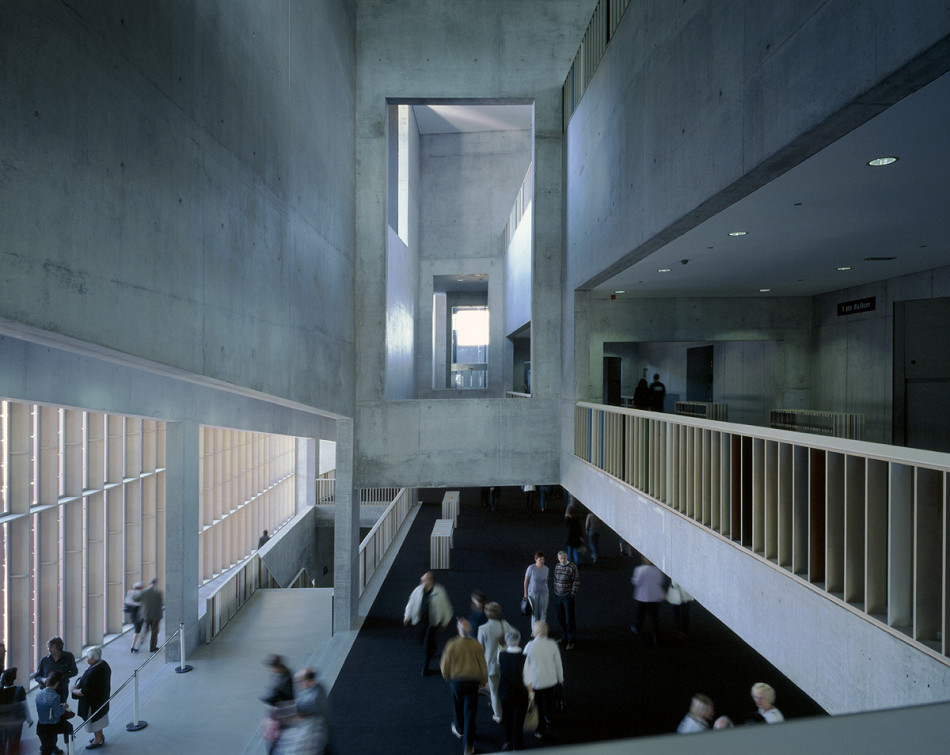 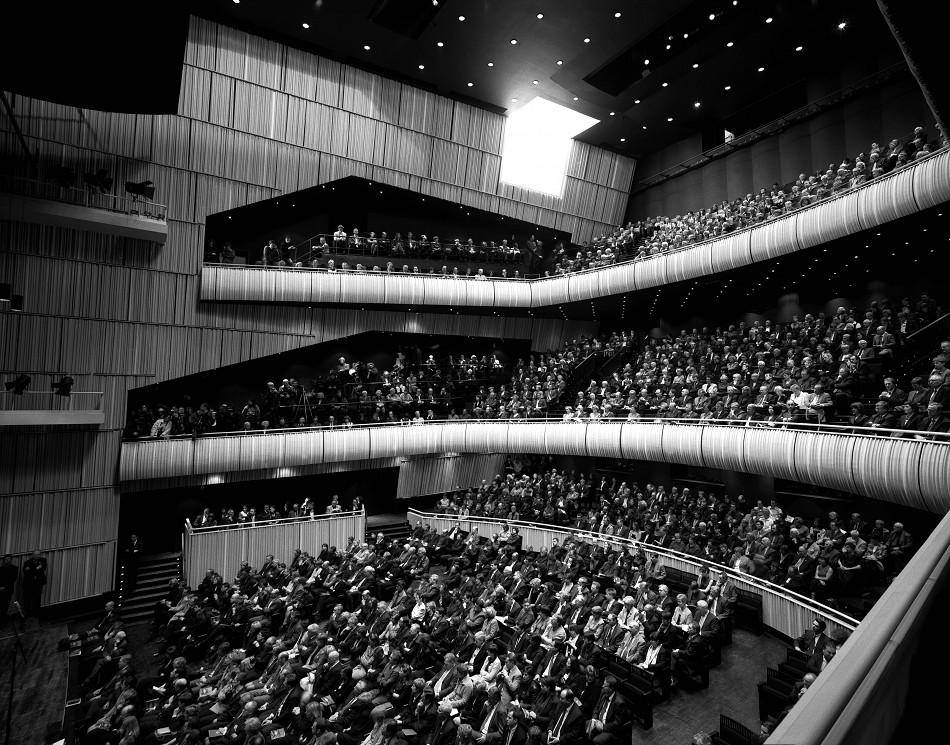 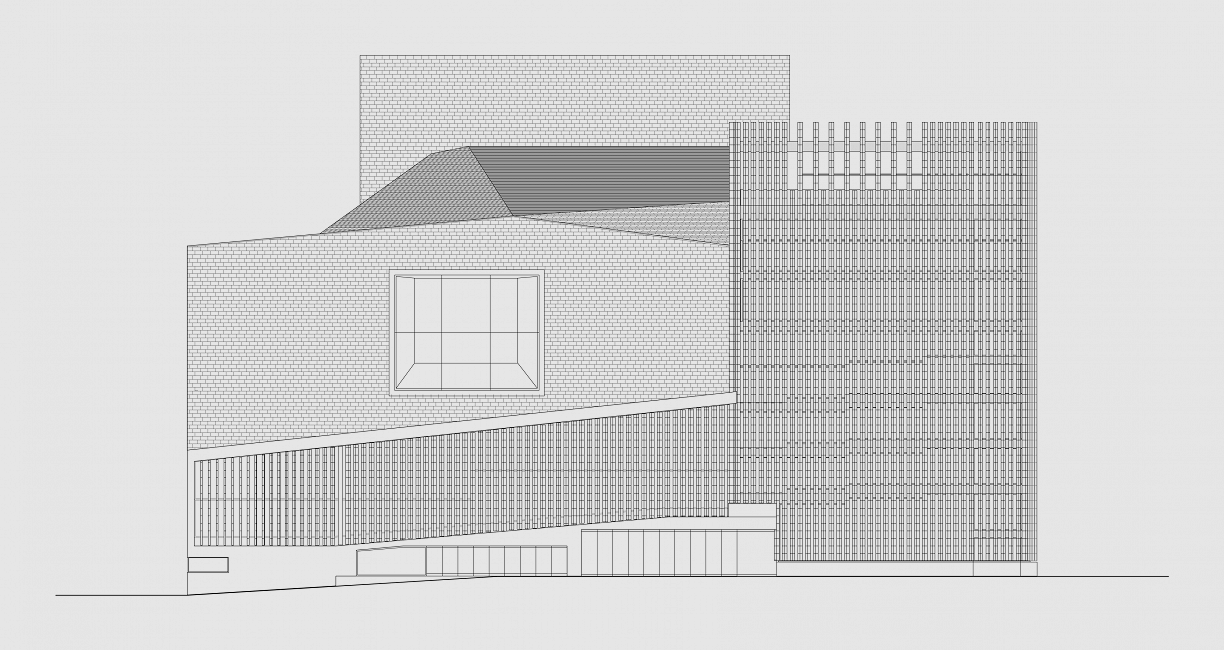 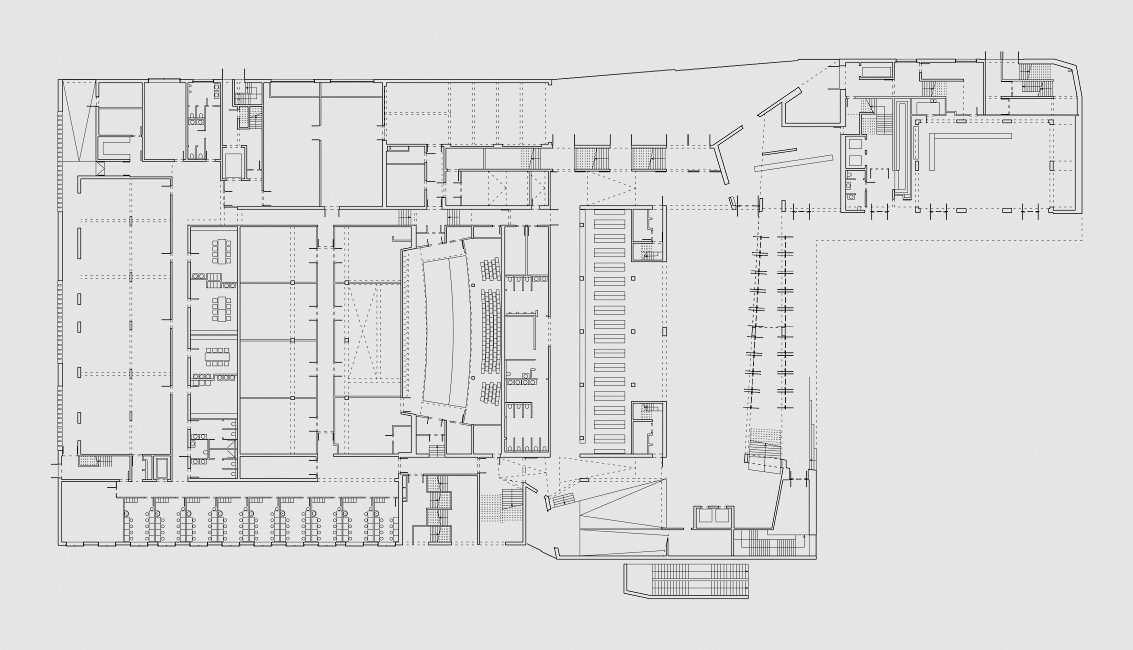 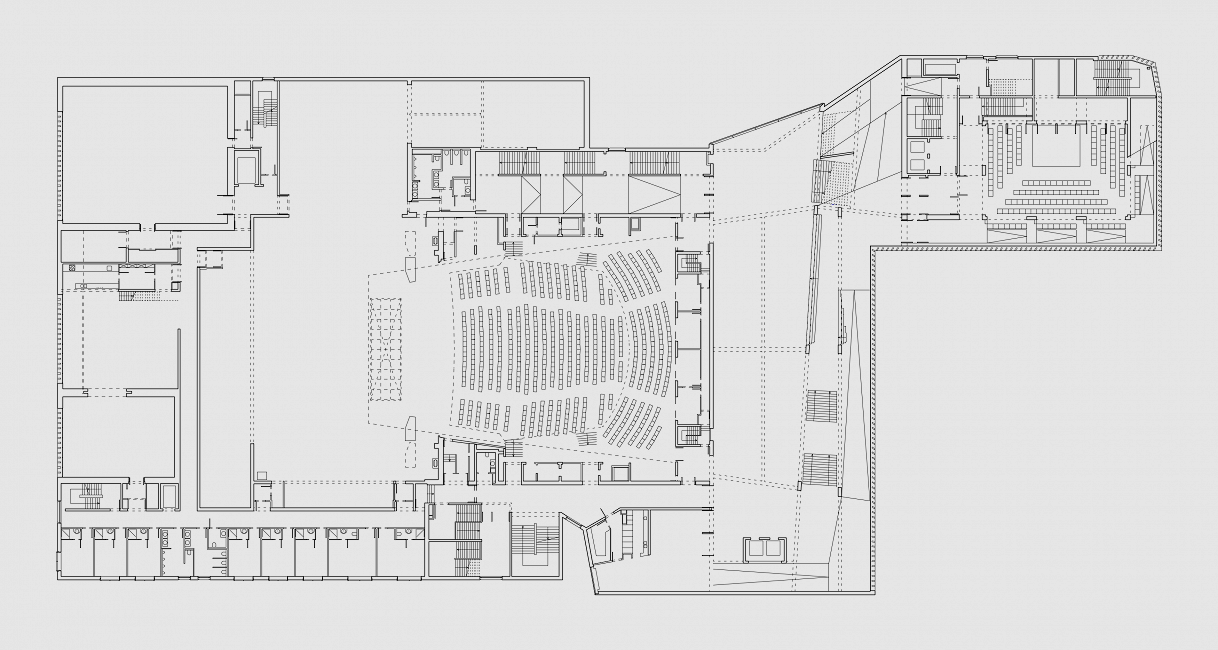 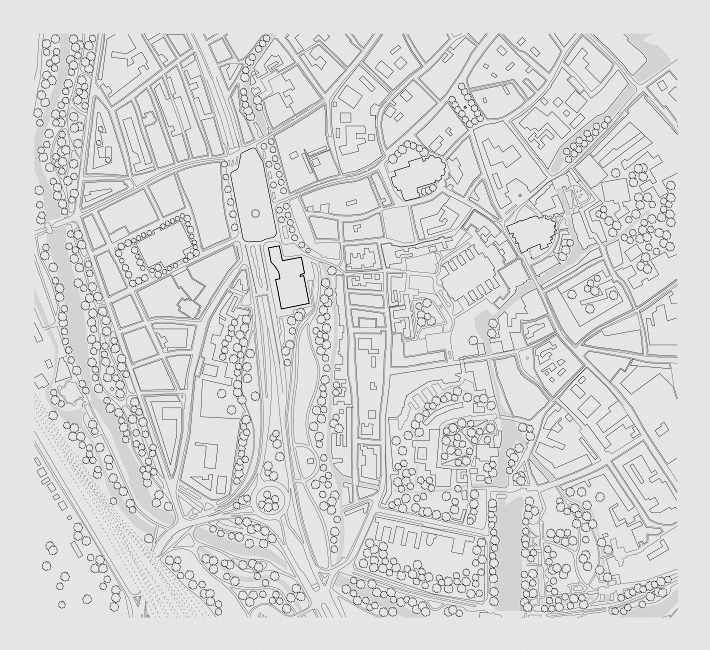 Spaces for the Mind, Objects for Well Being by Aslı Çiçek
Samuel Beckett’s second published novel, Murphy, opens with the eponymous protagonist having tied himself naked and with seven scarves to his rocking chair, swinging back and forth in the dark of his room. With this ritual Beckett’s well read, intellectual character retreats from everyday reality, relieves his body to set his mind free: ‘for it was not until his body is appeased that he could come alive in his mind’.2... Read more
Identity and Displacement: The Concert Hall in Bruges by Ákos Moravánkszy
In his contribution to the sixth edition of the Flanders Architectural Yearbook, Ákos Moravánkszy focused on the design of the delivered Concert Hall by Robbrecht en Daem. He points at the main references used by the architects: vernacular examples, the paintings from the Dutch Masters and the Flemish Primitives, Heimatliteratur of the 19th century, their idiosyncratic appropriation of Gothic and Baroque archit... Read more
Features of the Human Scene. People's Expectations and Architecture by Christophe Van Gerrewey
What people can expect from buildings is not a question that can be answered once and for all, primarily because their mutual relationship changes constantly. Architecture – valuable and life-affirming architecture – is perhaps more expensive and more inaccessible than ever, not so much because the price of materials and building costs are increasing, but because not enough is being invested in buildings accessible to all. That is why, in a... Read more
Encounters with
Dirk Braeckman
Encounters with
Luc Tuymans
Encounters with
Maarten Vanden Abeele

Cinematek Film Museum
Brussels, Belgium
2003–2009
Two new projection halls for the internationally acclaimed Royal Belgian Film Archives have been installed into the excavated volume under Victor Horta’s Centre for Fine Arts. This intervention has made it possible for the ‘Salles des Arts Décoratifs’ to be restored, as defined in the master plan for the restoration of the building. Cinematek’s prominent collection of historical film apparatus is displayed in a Wunderkammer, a free... Read more
Documenta IX, Aue Pavilions
Kassel, Germany
1992
The Aue pavilions were temporarily built for the hundred days of Documenta IX in Kassel and formed one of the components housing the contemporary art exhibitions. Visited by six hundred thousand people, the pavilions showcased the work of twenty-eight artists. The Building was situated in the extensive baroque park of Friedrichs' Aue's. This park lies sixteen metres below the nearby Friedrichsplatz from where one could look down on the pavilions... Read more
Rubens Site
Antwerp, Belgium
2017–…
Positioned on the side and certainly not willing to interfere in Rubens’ famous lines of sight, the new reception building for the Rubenshuis - the house, studio and garden of artist Peter Paul Rubens - is a discrete extension to this historical site. Besides the reception function, it also contains a multimedia experience centre, a museum café, a reading room and the library collection of the Rubenianum, known as the world’s most extensive... Read more
Media Building
Brussels, Belgium
2015–2019
Clad in a crystalline skin of structured glass and brass-coloured anodized aluminium frames, this park building is embedded in the variable topography of its site, with each side responding to a different context. Whereas the long facade addresses the longitude of the park and the frontality of the ‘Ereperk der Gefusilleerden’, a military cemetery for both World Wars, the northern volume anchors the building in the urban fabric... Read more
Chamber Music Hall
Gaasbeek, Belgium
2000–2004
A dairy at the foot of the historical castle of Gaasbeek has been converted into accommodation for musicians, with a chamber music hall. The late nineteenth-century front building was transformed into the accommodation; the hall replaces the original small factory shed but adheres to its original outline. The volume is dug deep into a slope into which an open ramp has been cut which then bends over the hall and climbs upwards like a ziggurat and... Read more
Close
Filter by type
Filter by status
Filter by category
Filter by tag