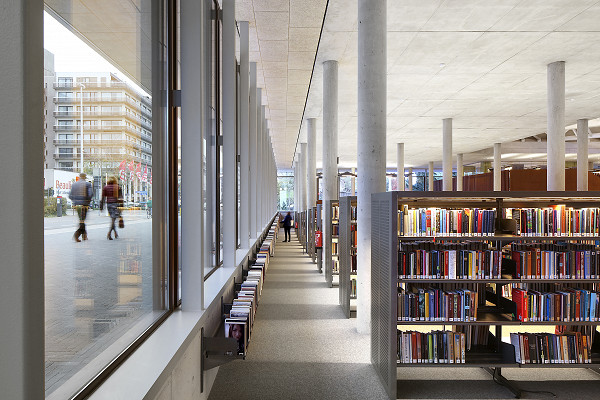 The reconstruction of the Zuidboulevard in Waregem ensures a thorough renovation of the city. The Zuidboulevard is the new gateway to the city and connects the cultural centre De Schakel, the city hall and the new library with each other. Instead of being a cul-de-sac, this renewed boulevard is a turning point, a climax for the previously interrupted loop for shopping, walking and cycling. This transforms the site into an easily navigable place.
The Zuidboulevard consists of an esplanade along which houses are organized in three clearly recognizable volumes. By dividing the housing program into three smaller entities, the volumes receive more façade and the apartments more quality, views and light. An important characteristic of the new urban development plan is that no front or back side is to be created. The boulevard side is just as much a front side as the library side. The residential volumes are visible from the four compass points, which is why all facades are equally designed. The library is by far the most important building on the site. Not only because its function can truly activate a public space, but because the building itself can embrace the site and the environment through its architecture as well. In order to encourage its readability and visibility, the architects have chosen to house the library in an independent volume, separate from the planned homes and other functions.
On the outside, the library looks like a low, glass disc. The thin protruding roof edge reinforces the idea of a building entirely on the ground floor. However, upon entering the building, a more complex architecture opens up. The simple façade conceals the wide concrete shell on the inside that gently fills the volume of the library with a variety of high and low spaces around a central lightwall. Although the library extends over two levels, the entire surface feels like one large stepped surface. All departments, reading rooms and seating areas are organized on this sloping floor. For practical reasons, the reading rooms are housed on the flat corners of the promenade. This design immediately provides a clear circulation and integral accessibility. The four glazed facades together with central spotlights (north light) provide the basic lighting for the building. All facades are designed in an identical way to prevent the building from turning its back to the Zuidboulevard.
Tags
Urban Mixed Use Masterplan Library Collaboration
Client
City of Waregem
Architects
Robbrecht en Daem architecten, Goedefroo+Goedefroo
Program
city renovation project with the reconstruction of the Zuidboulevard and the realisation of a new public library
Location
Waregem, Belgium
Date
2012–2016
Status
Completed
Floor Surface
4.600 m2 (library)
Team
Paul Robbrecht, Hilde Daem, Johannes Robbrecht, Bert Haerynck, Asli Çiçek, Trice Hofkens
Structural Engineering
VK Engineering
Services Engineering
VK Engineering
Landscape
Bureau Bas Smets
Infrastructural Engineering
Studiebureau Demey
Procedure
Design, Build
Developer
Vanhaerents Development nv
Contractor
Artes Depret
Security
VeCoBo 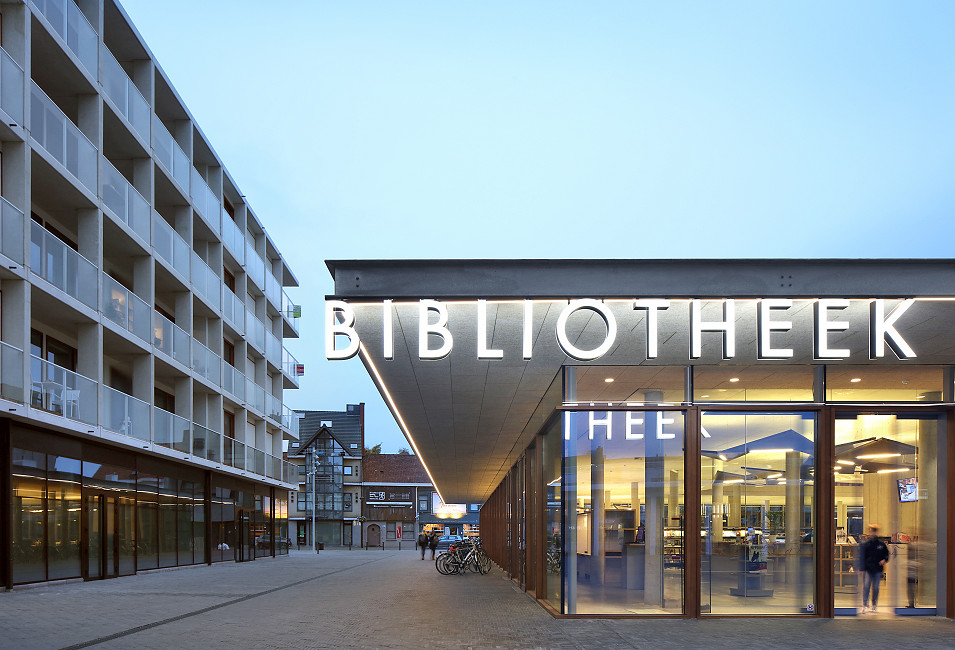 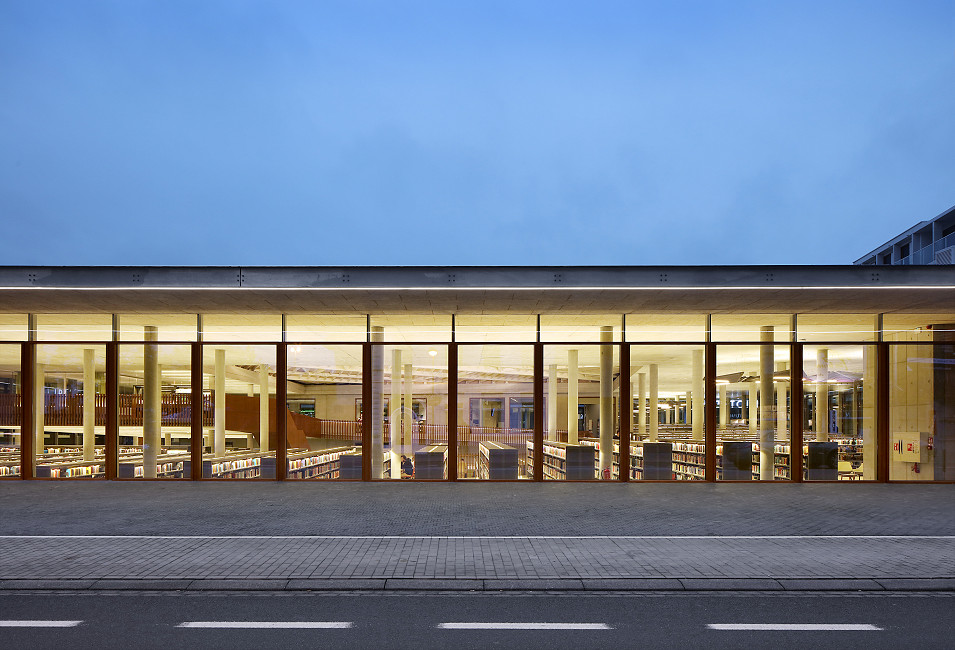 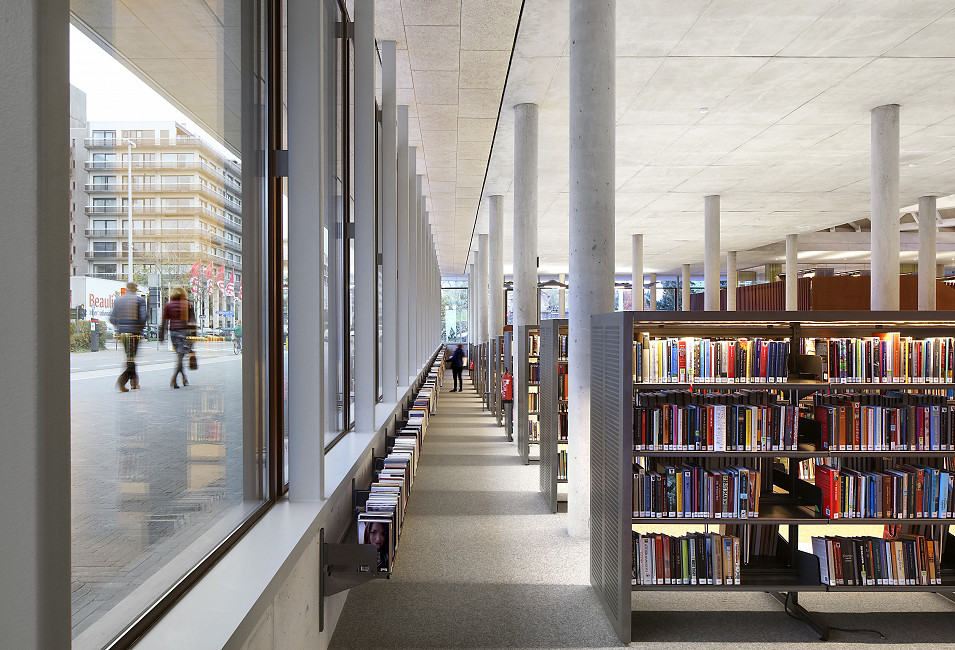 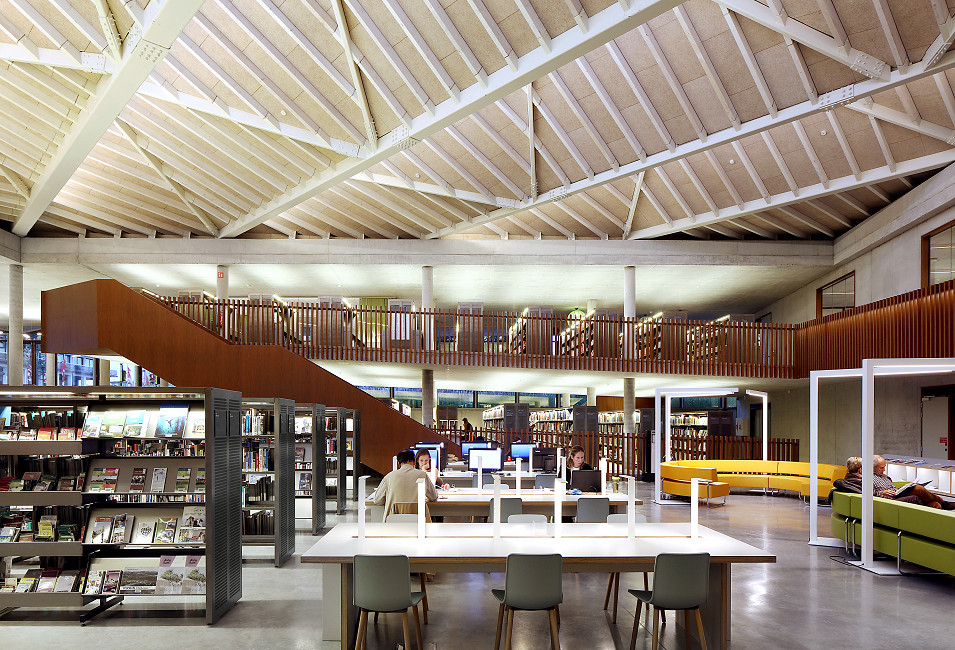 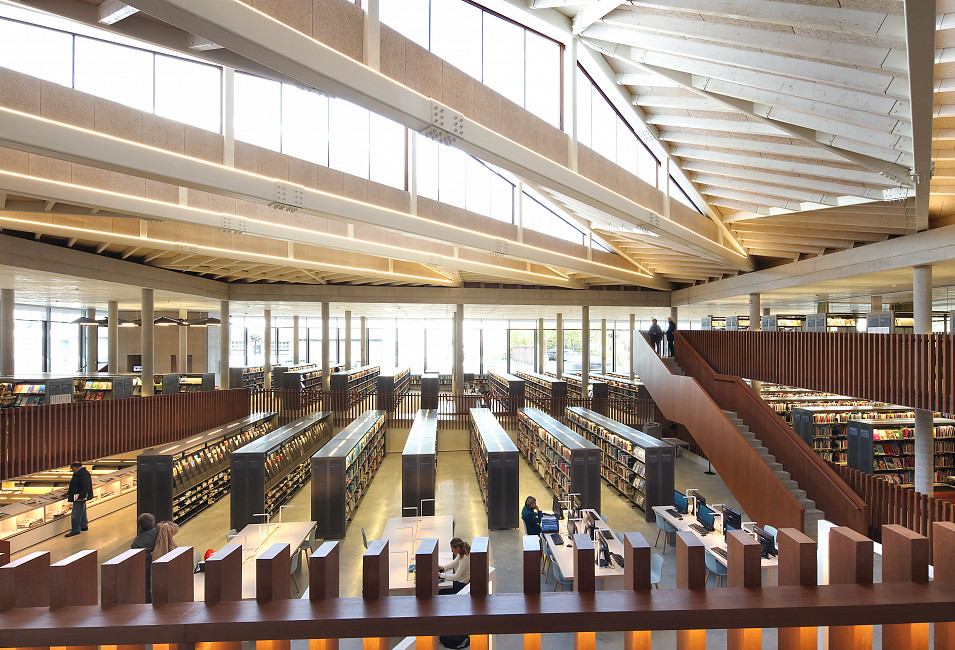 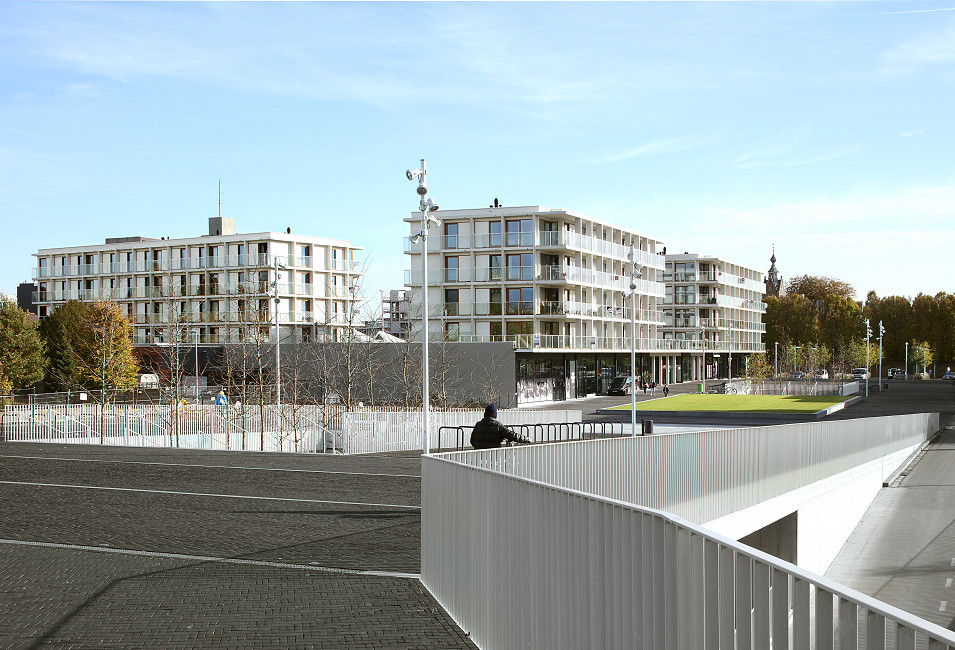 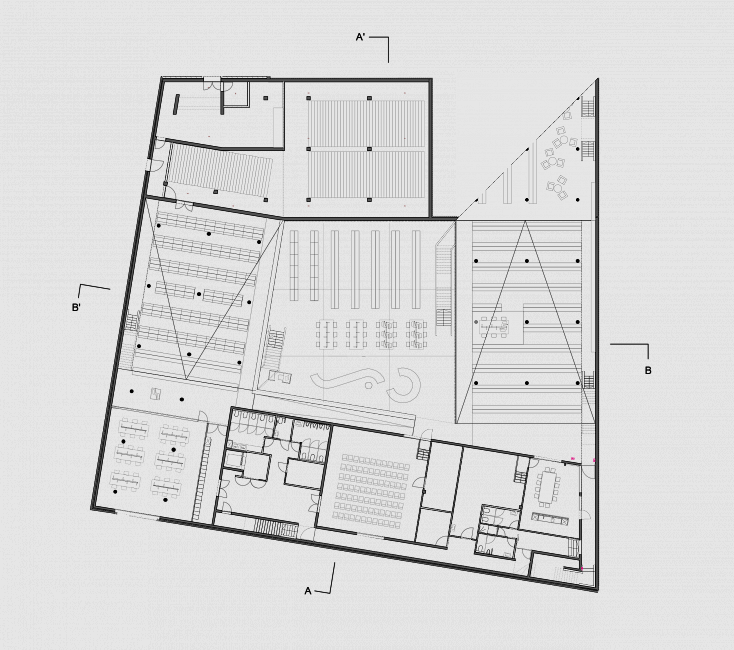 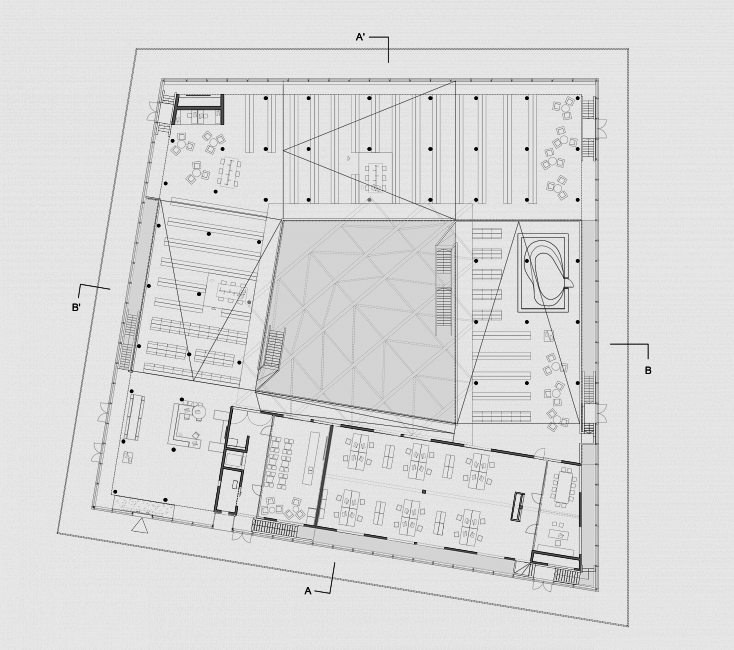 Park Abbey
Heverlee, Belgium
2019–…
Park Abbey is a 12th-century heritage site that is undergoing a complete restoration by Studio Roma. For the design of the circulation within the abbey's eastern (and primarily public) wing, Studio Roma called on Robbrecht en Daem architecten. Within this design, two tower volumes with a pentagonal footprint were chosen as circulation cores. The larger tower in exposed concrete is part of the museum route, and the smaller tower in steel serves as... Read more
Archives de Bordeaux Métropole
Bordeaux, France
2010–2015
The Halles aux Farines, situated on the right bank of the Garonne, was built along with the construction of the first railway lines and is centrally situated amidst a network of tracks. The former warehouse has been transformed into the municipal archives of Bordeaux, and forms the first link with the future eco-district of Bastide-Niel. The industrial history of the site acquires a new interpretation: the storerooms, where the archive boxes are... Read more
St-Felix Warehouse
Antwerp, Belgium
1999–2006
The Antwerp City Archives are housed in the 20.000 m2 Sint-Felix Warehouse, an icon of historical harbour architecture in Antwerp. The project involved the construction of concrete containers on the upper six storeys, for the conservation of documents from the city’s archives. On the top floor, a new oak roof structure accommodates reading and study rooms around three large, well-lit light wells. Access from the city is via a semi-public... Read more
State Archives
Ghent, Belgium
2010–2014
The volume for the State Archives, located in the city center, is meticulously matched to the scale of the surrounding buildings. The sturdy corner building respects the pattern of the street onto which it fronts, while the long horizontal volume behind adheres to the cornice height of the surrounding streets and alleys. At the end of the horizontal wing, the facade is set back from the plot boundary. This makes space available for a small public... Read more
Boekentoren - University Library
Ghent, Belgium
2007–2022
The conservation project for the Book Tower aims at restoring the historical site of the University Library, situated in the lively quartier Latin of Ghent, meanwhile at transforming it into a library for the 21st Century. The design unites the ambitions of the University to respectfully repair the monumental site to its original condition, but also to render it a contemporary house for a great diversity of users and for the valuable own... Read more
Close
Filter by type
Filter by status
Filter by category
Filter by tag