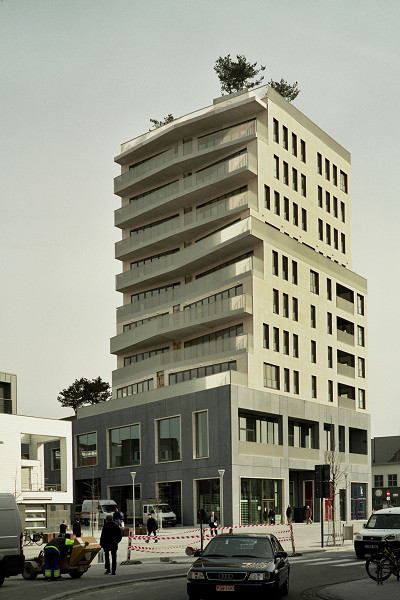 The shopping centre at Sint-Janspoort is a more sustainable counterpart to the large shopping centres on the outskirts of towns and cities and covers a whole block in the historical city centre of Kortrijk. With its interiorised street pattern and monumental atrium – the garden of light – this shopping centre forms a diagonal link between Steenpoort and Veemarkt. The tower closes off one end of the Romeinselaan. The volumetry of the block, which contains offices and homes as well as shops, matches the scale of the surrounding buildings.
Urban design and architecture have here been put entirely at the service of integrating the project into the urban context. The creation of several entrances to link up with the surrounding shopping streets, combined with the design of new routes straight through the shopping centre that respect the natural pedestrian routes, enables the project to nestle into its surroundings naturally. The strict scale of the stone shopfronts reflects the pattern of the surrounding streetfronts and at the same time brings this megaproject down to human proportions. The ceiling height of the underground car park was adapted so that deliveries by lorry can be made entirely below ground.
By orienting the retail spaces both inwards (to the ‘garden of light’) and outwards (towards the surrounding shopping streets) and by incorporating an existing ‘outdoor street’ into the shopping complex, a refined game is played in which the boundaries between what is inside, and what is outside, appear to blur. The relationship with the surroundings is further strengthened by views of the surrounding streets and the Kortrijk skyline that were created at various places in the interior. In combination with the pedestrian shopping area around it, this makes for an extensive range of urban public spaces: covered and uncovered shopping streets that merge into one another; the central ‘illuminated court’ that also provides room for urban, cultural activities; and the historical Veemarktplein, whose new entrance to the shopping centre and the strategically located block of flats gives it a new identity.
Tags
Tower Mixed Use Masterplan Historical City Infrastructure
Client
Sint-Janspoort nv, Foruminvest Group-City Mall
Architects
Robbrecht en Daem architecten
Program
shopping centre, apartments, parking, tunnels and infrastructure, residential tower
Location
Kortrijk, Belgium
Date
2005–2010
Status
Completed
Floor Area
97.300 m² (restaurants and cafés: 1.000 m2, units car park: 990, apartments: 40)
Team
Paul Robbrecht, Hilde Daem, Tom De Moor, Haike Appelt, Luc Beckstedde, Petra Decouttere, Suzanne Desmet, Arne Deruyter, Kristof Keerman, Griet Ollivier, Cliff Reid, Kris Van Buynder, Mo Vandenberghe, Wim Walschap
Project Manager
THV Technum-TDE
Structural Engineering
THV Technum-TDE
Services Engineering
THV Technum-TDE
Acoustics
THV Technum-TDE
Contractor
THV Wijngaard (Van Laere, Van Roey)
Consultant
Seco 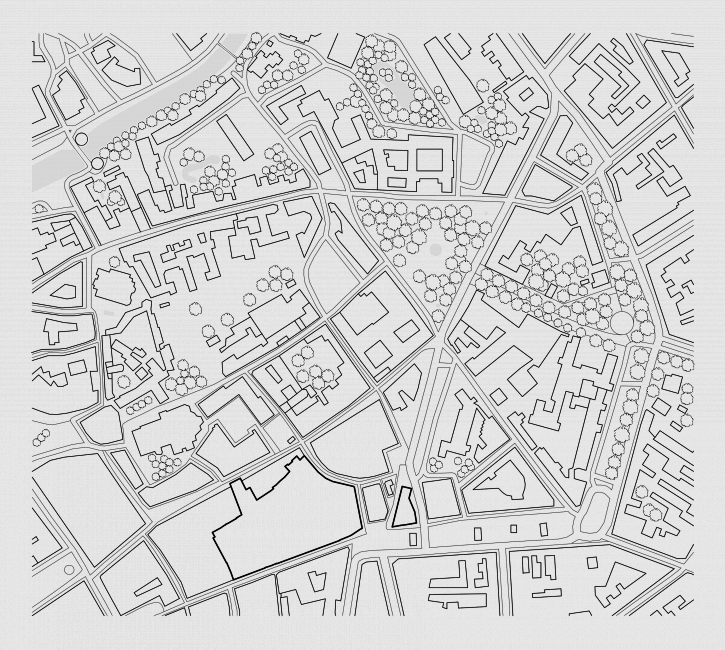 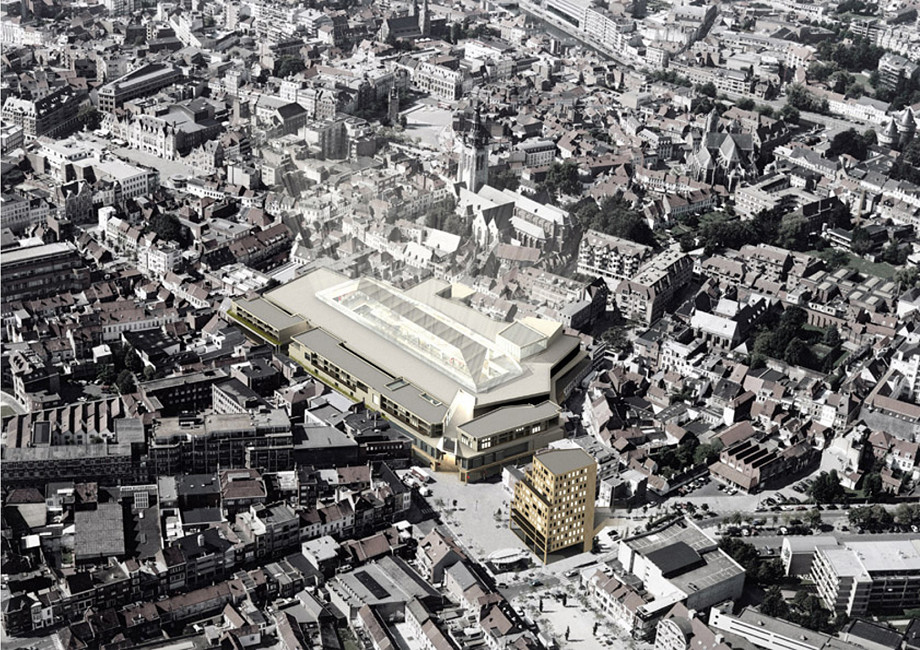 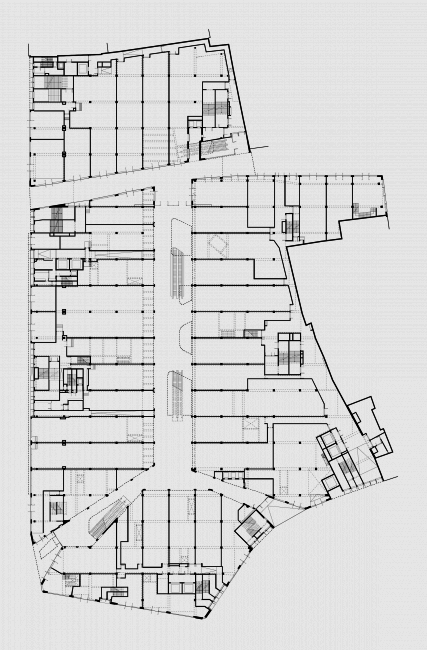 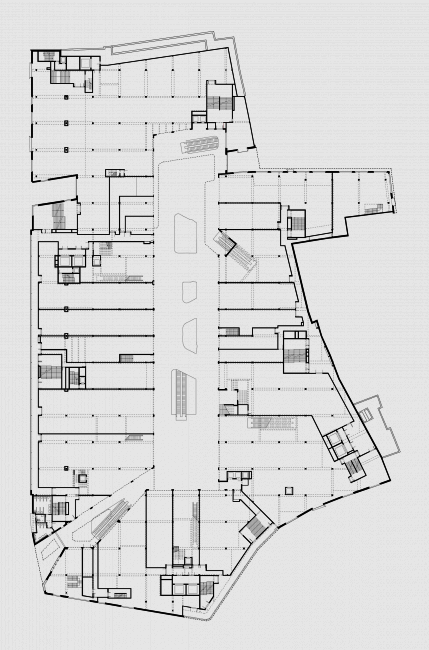 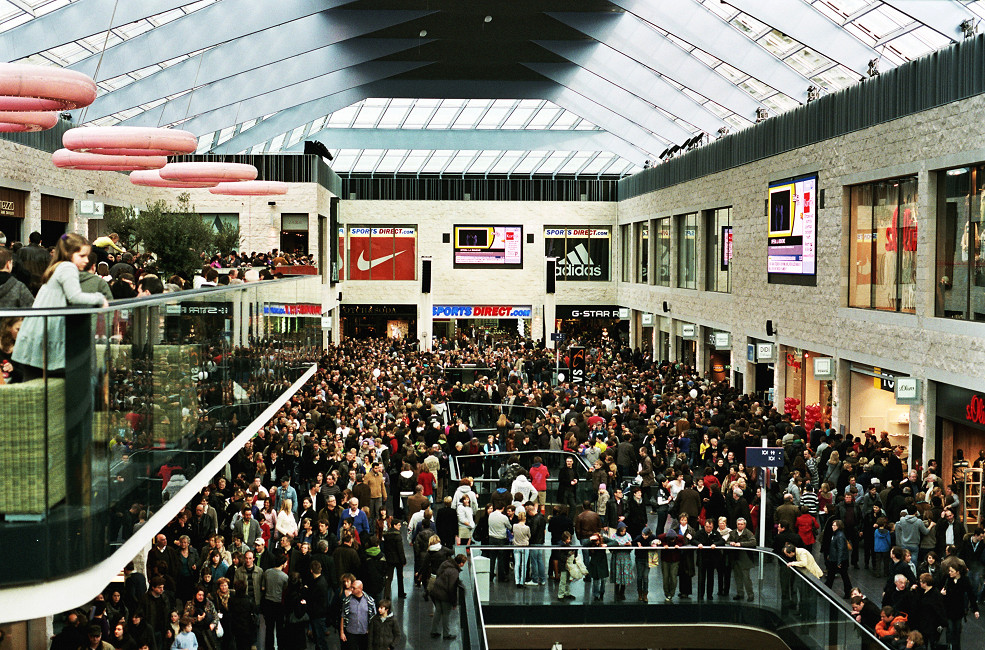 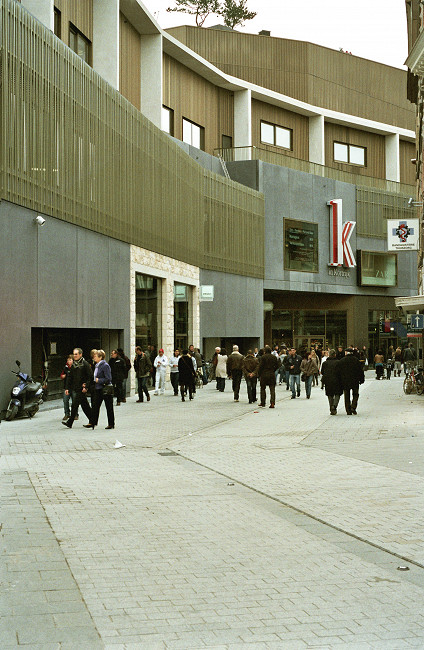 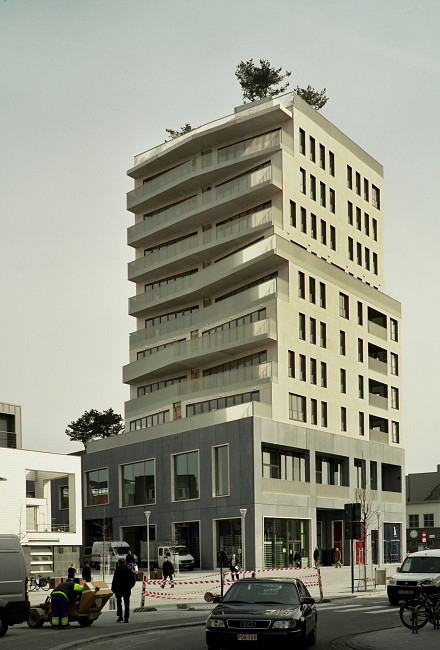 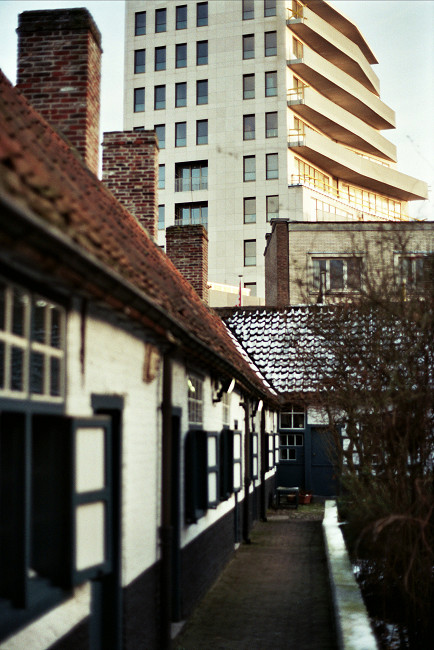 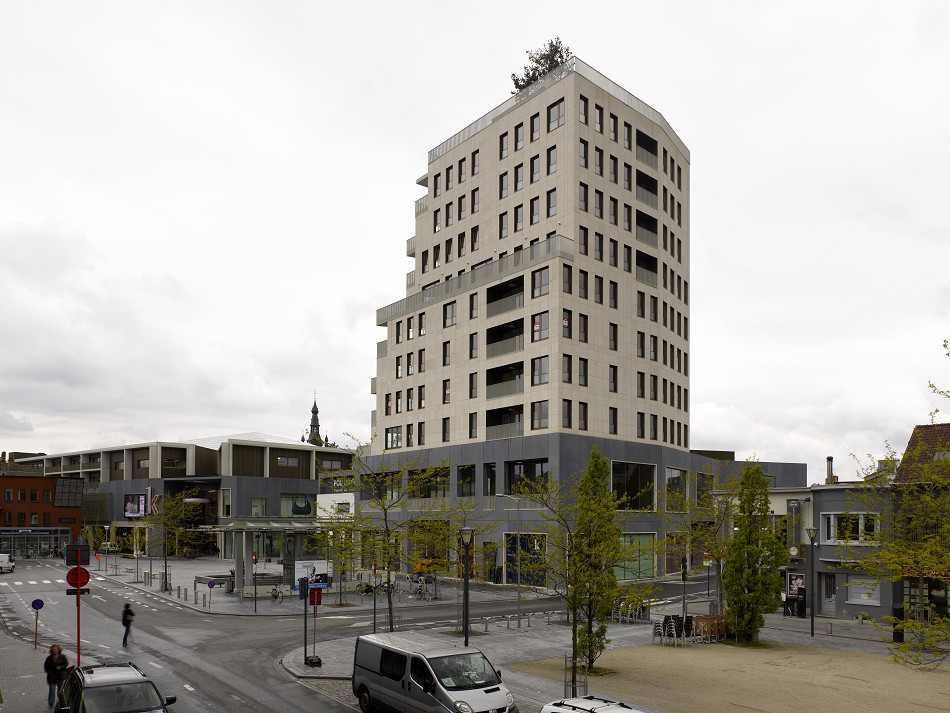 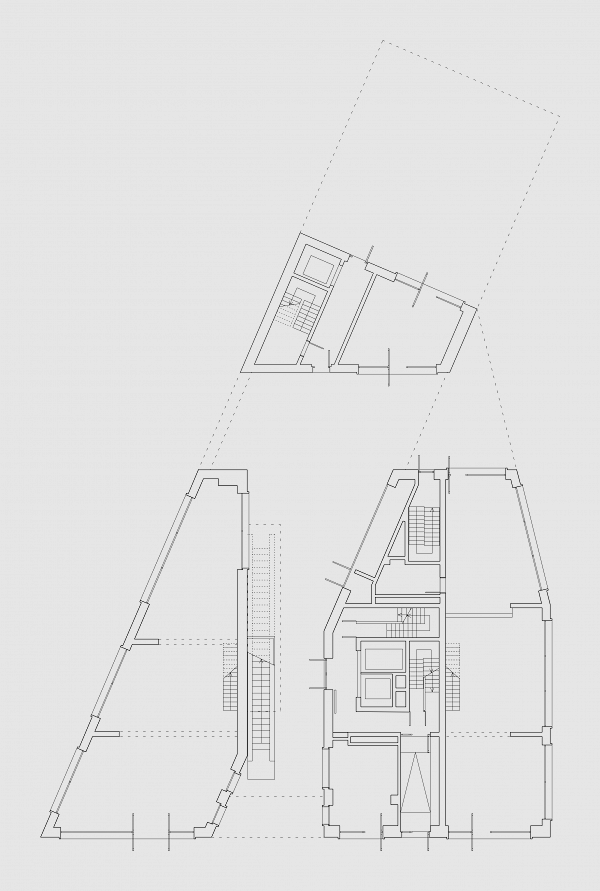 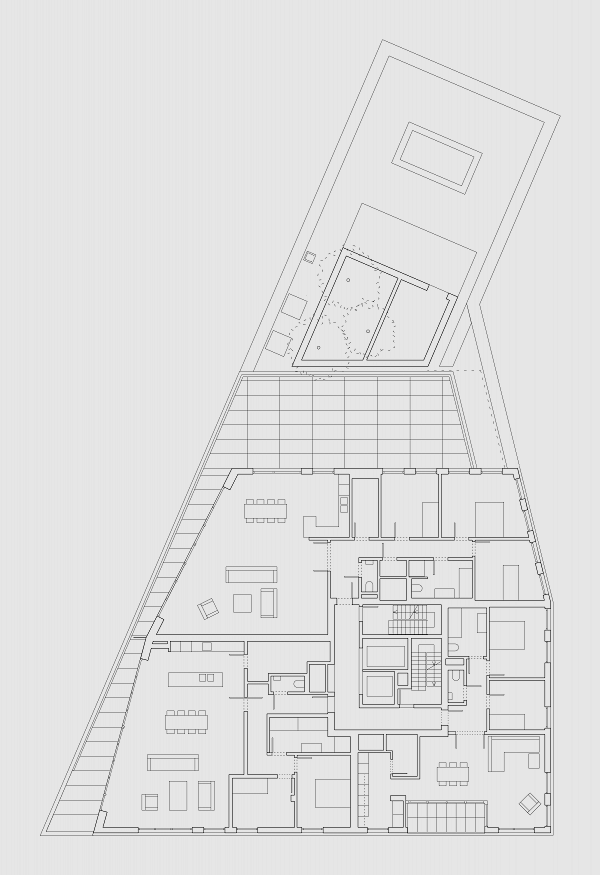 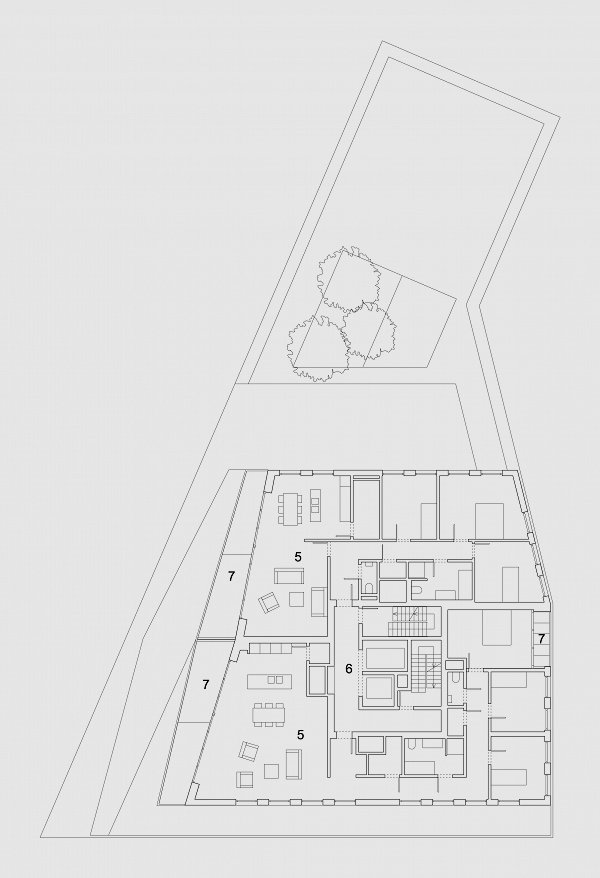 Woodland Cabin
South of Flanders, Belgium
2001–2002
A wooden walkway, which descends from a platform to the small valley behind a villa in southern Flanders, leads to the Woodland Cabin, a distant relative of the igloo and the small buildings one comes across in the mountains everywhere in the world. On a platform next to a pond, wooden blocks have been stacked to form a two-lobed space that is closed off with a glass wall and door. Beams that fan out support a green roof from which emerges the... Read more
Zoo
Antwerpen, Belgium
2005–2009
Making a Masterplan for the City Zoo of Antwerp. This included a multitude of housing for animals, a central children’s pavilion, visitors facilities, an office building, an entrance square, a restaurant and a shop.... Read more
Mies van der Rohe 1:1 Model Golfclubhaus
Krefeld, Germany
2011–2013
In the summer of 2013 Robbrecht en Daem architecten realizes a temporary pavilion based on a competition design by Ludwig Mies van der Rohe from 1930. The design, a clubhouse for a golf course in the gently rolling countryside around the former industrial city of Krefeld, Germany, was never built at the time it was designed. Christiane Lange, art historian and curator for ProjektMIK, invited Robbrecht en Daem architecten to design an objet d'... Read more
Victor Bozar Café
Brussels, Belgium
2014–2016
With the Bozar Café, Robbrecht en Daem architecten aimed to create a world in all modesty, a kind of microcosm or universe. To give the visitor an experience. A returning aspect in the interiors of the café, the book shop and the box office are the 'circles' - like the form of chandeliers and mirrors - that generate a 'kind of planetarium with sunsets and sunrises'. The choice of materials, such as the dark green granite and leather benches,... Read more
Winge Golf and Country Club
Tielt-Winge, Belgium
2011–2014
In the new clubhouse for the Winge Golf and Country Club, the relationship between inside and outside is crucial, as is the merging of the functional and the scenic. The white building envelops the entire environment, like a warm white blanket over the gently sloping terrain. Two separate building volumes are connected by a continuously sloping concrete roof, accommodating all practical functions such as tee-off and practice rooms on the one hand... Read more
Close
Filter by type
Filter by status
Filter by category
Filter by tag