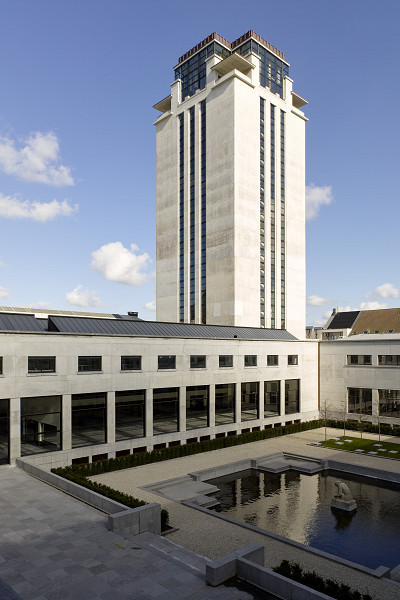 The conservation project for the Book Tower aims at restoring the historical site of the University Library, situated in the lively quartier Latin of Ghent, meanwhile at transforming it into a library for the 21st Century. The design unites the ambitions of the University to respectfully repair the monumental site to its original condition, but also to render it a contemporary house for a great diversity of users and for the valuable own collection of the institute.

The Ghent University Library is internationally renowned for its ‘heritage collection’ of manuscripts, books, coins, curiosa, newspapers and magazines. The study into the conservation project revealed that the conservation of these precious objects according to current climate policy (Ashrae) would not be possible without harming dramatically the monumental character of the building. Therefore a first phase of the project consisted of the realisation of a new underground book depository underneath the historical courtyard, where 40 km of books and objects are being preserved for the future in optimal climate conditions, on tree underground levels. The realisation of this first phase permitted us to start with the conservation project of the historical building itself, after the evacuation of the collection from its different spaces.

The historical site of the Book Tower, a modernist masterpiece by Henry van de Velde (1930-35) is characterised by the contrast between the horizontality of U shaped building complex and the verticality of the actual Book Tower placed in one corner. They clearly display Van de Velde’s pioneering library concept: Contrary to 19th century Library layouts, Van de Velde separates collection from consultancy, stacking the collection efficiently on man high tower levels and foremost allowing for brightly lit and spacious reading rooms.

The brutal fair-faced concrete skin and the elegant exterior framework in steel accentuated Van de Velde’s volumetric game of horizontal vs vertical. The second phase of the conservation project focused on these two emblematic aspects of Van de Velde’s facade: We started by ‘scraping off’ the current non-original protection layer together with the concrete affected by concrete carbonation decay process, then pouring back a thin new concrete layer on top. The recent completion of this new concrete skin has been considered an important milestone during the process of the construction site. All windows and doors are brought back to their original divisions and fine profiles, and foreseen with high performing but ultra transparent glazing; The integration of contemporary building physical demands within a conservation logic was a constant challenge and ambition within the study of this project.

Today, the third phase of the project has been finalised. This fase was focussing on the one hand on the pure conservation of the main historical interiors, situated in the main wing of the building, such as the Main Reading Room and public corridors. Valuable interior finishing and furniture are restored, original plan layouts were carefully studied to re-establish meanwhile lost spatial situations. On the other hand the conservation project aimed at a few crucial interventions and functional reshuffles into the interiors to increase their meaning and use for a diverse range of users, from students, to researchers, honourable guests and even tourists. The main wing has been discharged from improper back office functions and received a contemporary climate installation, fully integrated into the architecture, as well as new roof lights to prevent excessive summer heating without obstructing the characteristic daylight infiltration into the spaces. The Main Wing retrieved its originally ‘silent’ character by regrouping and reinforcing a few student facilities in the West wing (HIKO): a new entrance pavilion in the arm pit of the site allows direct access to a multi media centre with increased capacity, two new class rooms and a future reading café. This student hub in the West wing will form a hinge between the Main reading rooms and the adjacent Faculty of Arts and Literature. 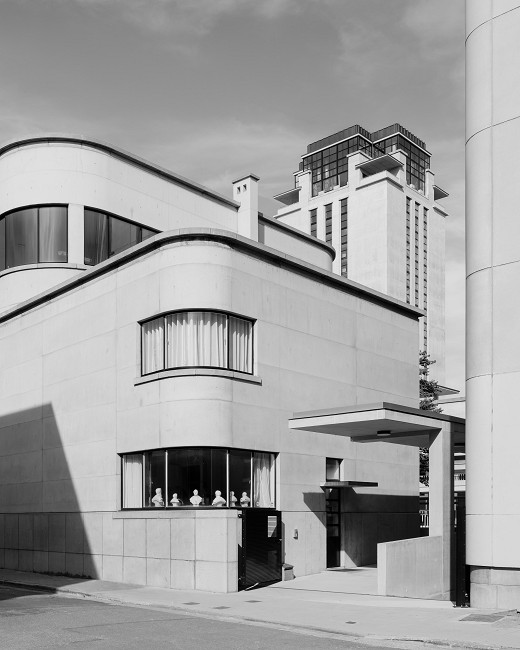 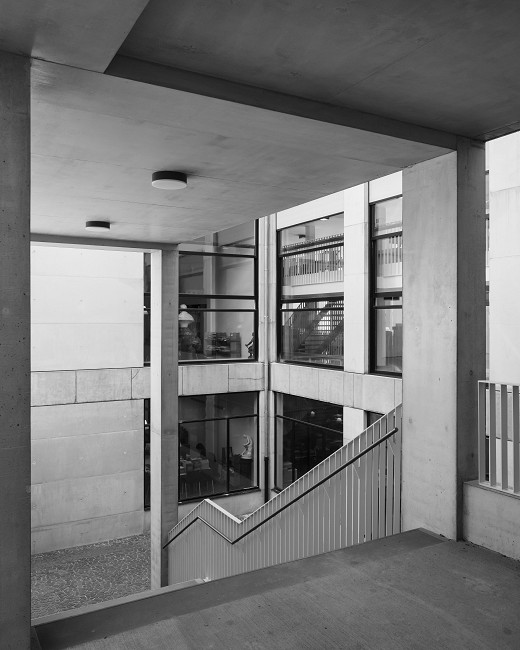 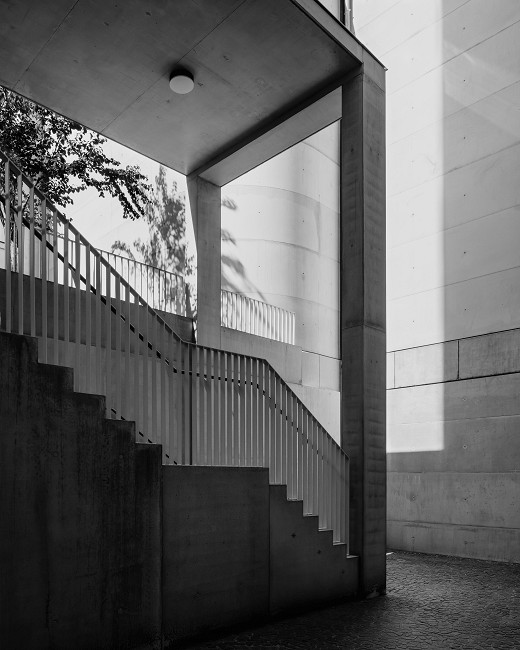 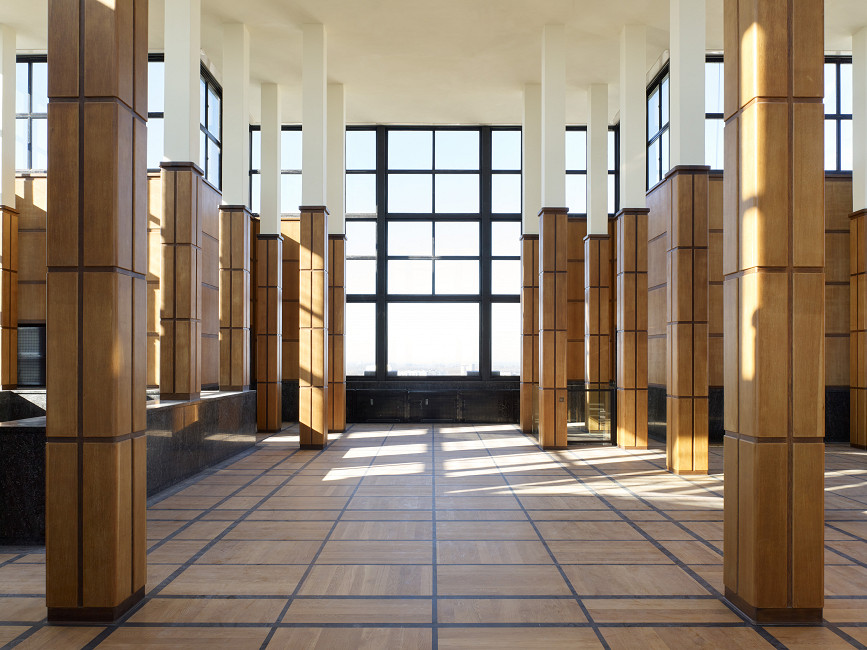 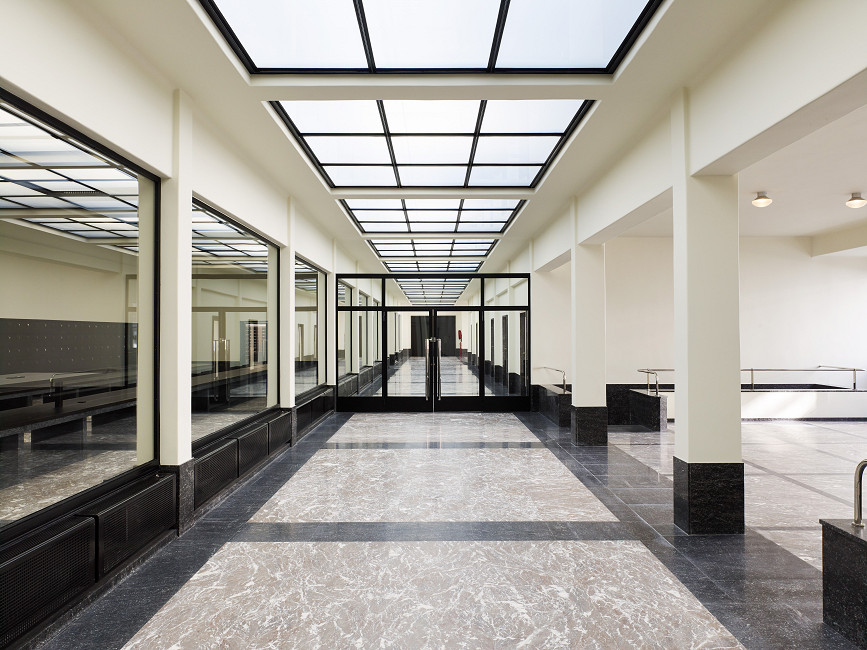 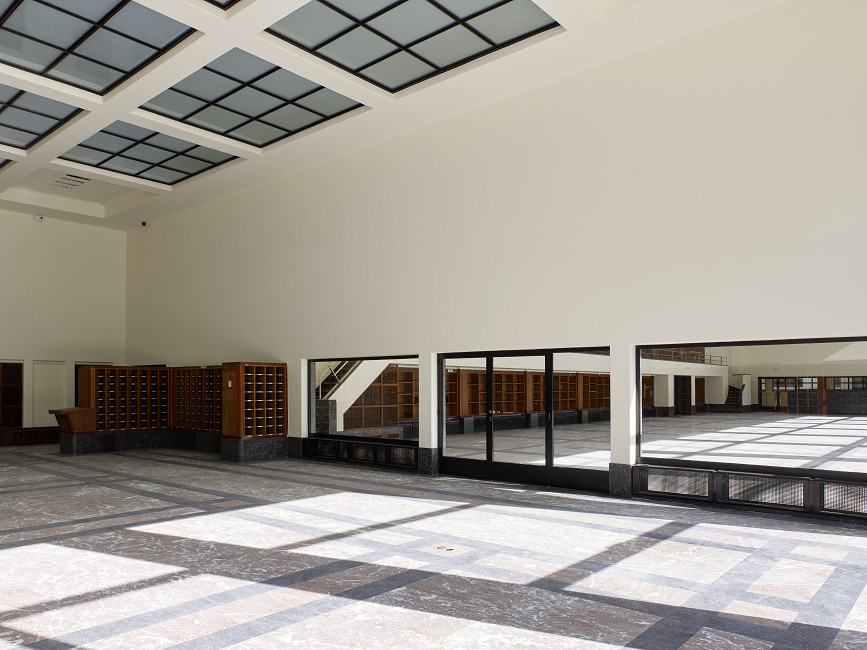 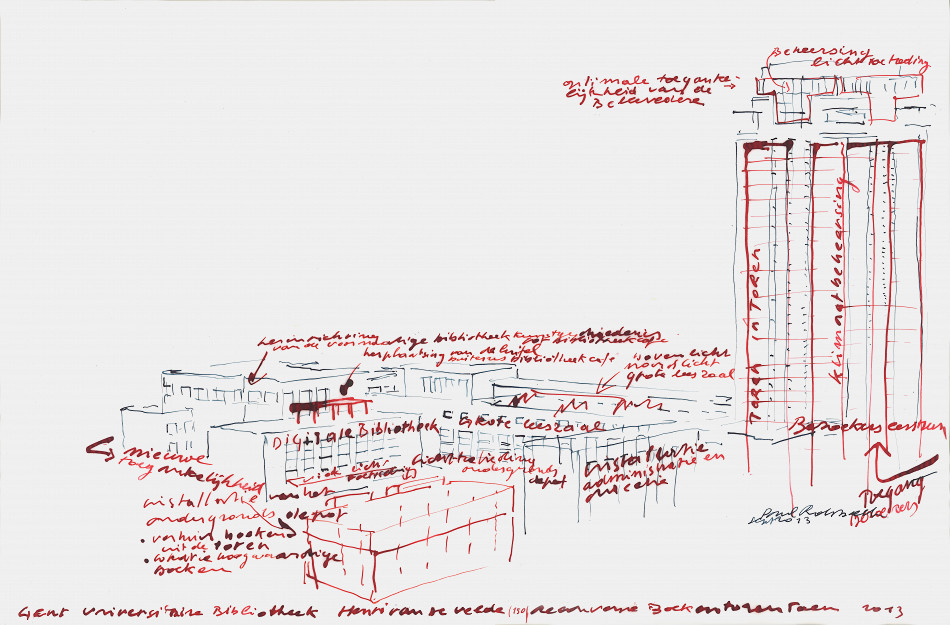 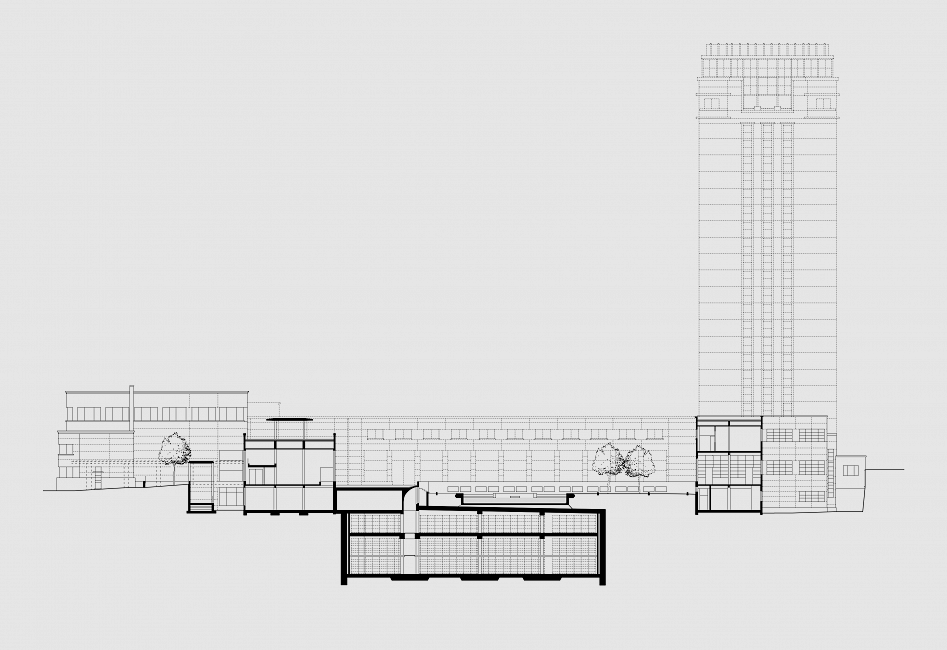 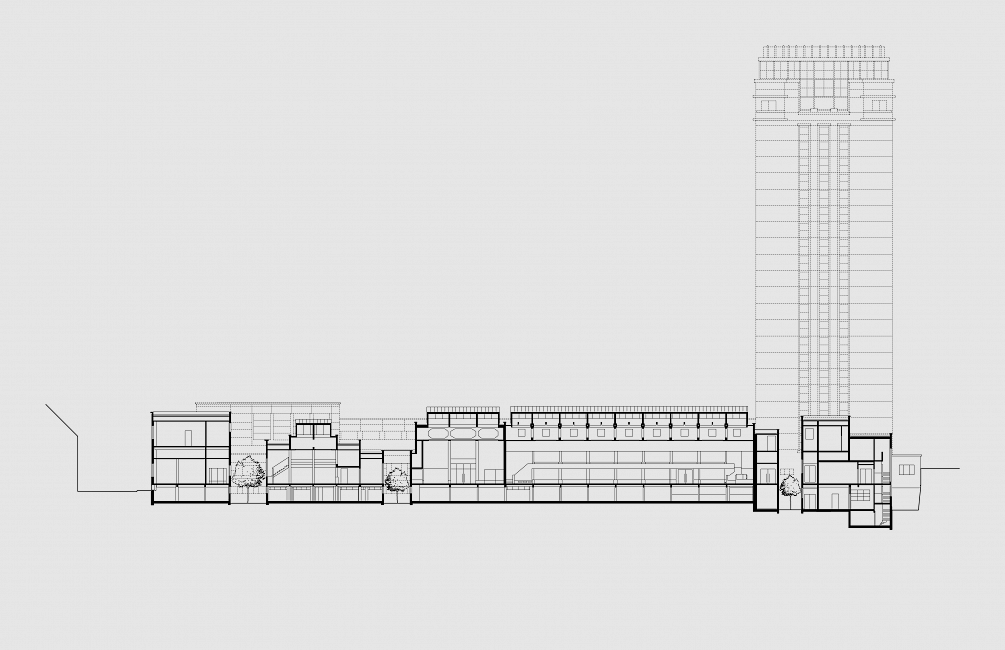 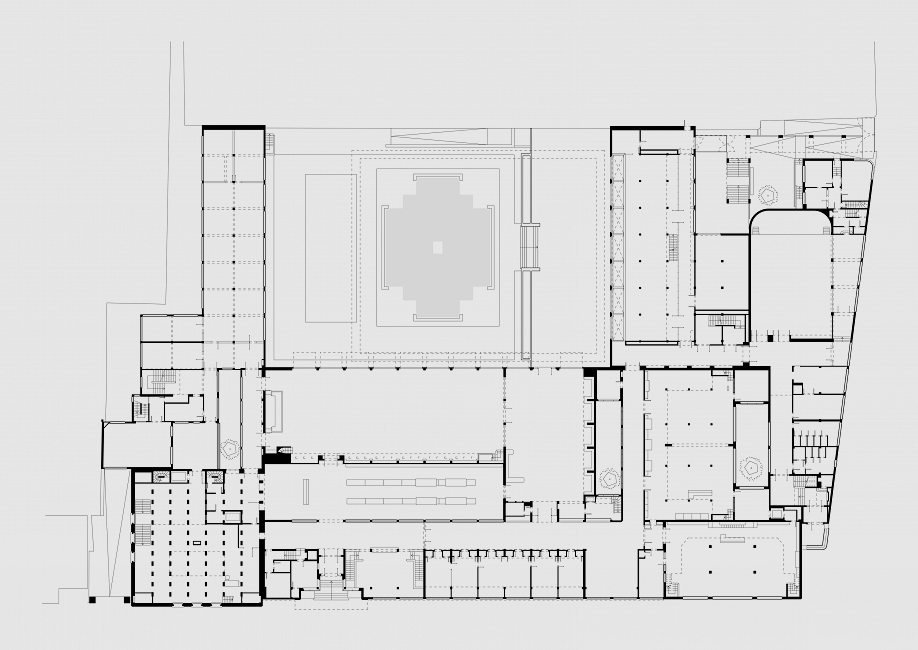 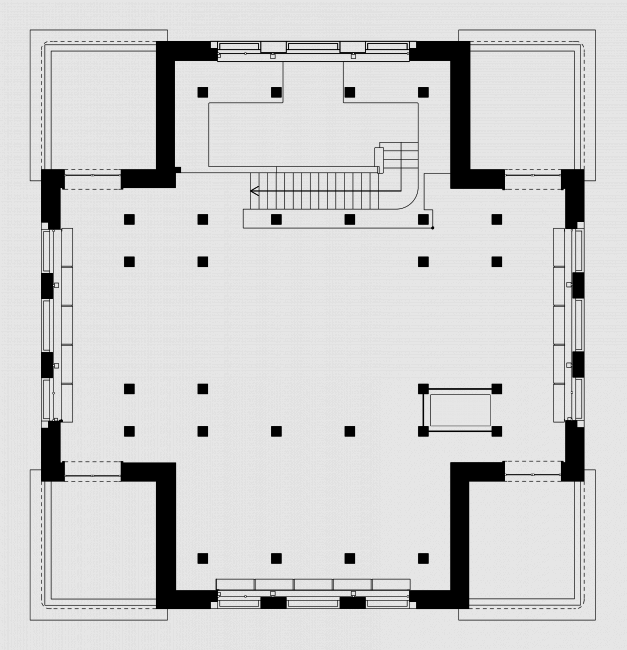 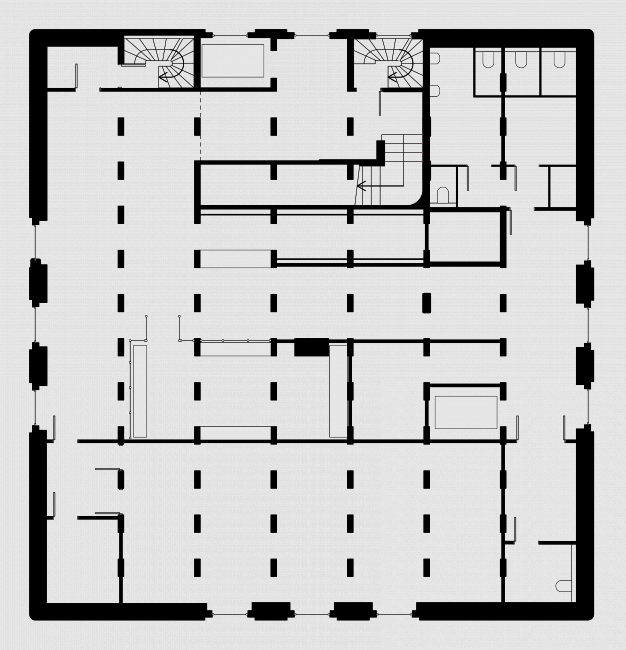 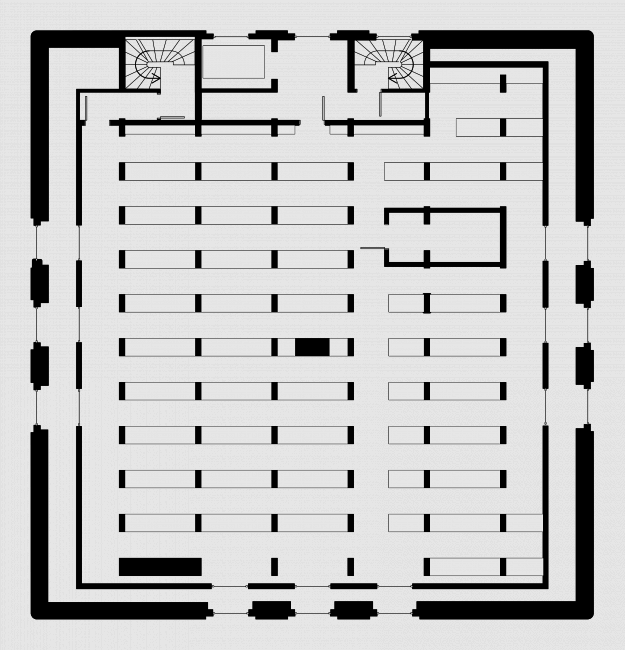 When History Becomes Form by Joan Ockman
Our relationship to the architectural modernity of the last 150 years grows increasingly attenuated. How much has changed in just a few decades! Buildings once touted for their absolute newness survive in our sprawling, chaotic cities like ageing grandparents, posing irksome problems: how to maintain them? how to afford them? can they accommodate contemporary needs? can we contrive new uses to justify their existence?... Read more
Encounters with
Dirk Braeckman
01.04.2022
Now 7: Exhibition: p.s. - SVP by Vandehove
25.06.2022
Now 11: Book 'De Boekentoren / Der Bücherturm von Henry van de Velde' by Walter Vorjohann

The Antwerp City Archives are housed in the 20.000 m2 Sint-Felix Warehouse, an icon of historical harbour architecture in Antwerp. The project involved the construction of concrete containers on the upper six storeys, for the conservation of documents from the city’s archives. On the top floor, a new oak roof structure accommodates reading and study rooms around three large, well-lit light wells. Access from the city is via a semi-public... Read more
State Archives
Ghent, Belgium
2010–2014

The volume for the State Archives, located in the city center, is meticulously matched to the scale of the surrounding buildings. The sturdy corner building respects the pattern of the street onto which it fronts, while the long horizontal volume behind adheres to the cornice height of the surrounding streets and alleys. At the end of the horizontal wing, the facade is set back from the plot boundary. This makes space available for a small public... Read more
City Archives
Sint-Niklaas, Belgium
2015–…

In order to arrive at a thoughtful strategy that proves itself to be sustainable and intelligent in the long term, a master plan vision for the entire building block was first developed. The proposition of a new wing offers the opportunity to better organise the entire site, to relieve pressure from the interior block and to complement old and new in a targeted way. The ambition was therefore to increase the quality of the 'building as a whole'... Read more
Park Abbey
Heverlee, Belgium
2019–…

Park Abbey is a 12th-century heritage site that is undergoing a complete restoration by Studio Roma. For the design of the circulation within the abbey's eastern (and primarily public) wing, Studio Roma called on Robbrecht en Daem architecten. Within this design, two tower volumes with a pentagonal footprint were chosen as circulation cores. The larger tower in exposed concrete is part of the museum route, and the smaller tower in steel serves as... Read more
Campus of the Royal College of Art
London, United Kingdom
2016

The extension of the Royal College of Art at Battersea is a piece of art infrastructure. Free ‘platforms’ for creation allow current and future flexibility. As a terraced extension of the street an additional collective space – ‘the Stoa’, encourages interaction between staff, students and researchers. The hybrid nature of its design makes it the focal emblematic space the whole RCA community can associate with – a new identity... Read more
Close
Filter by type
Filter by status
Filter by category
Filter by tag