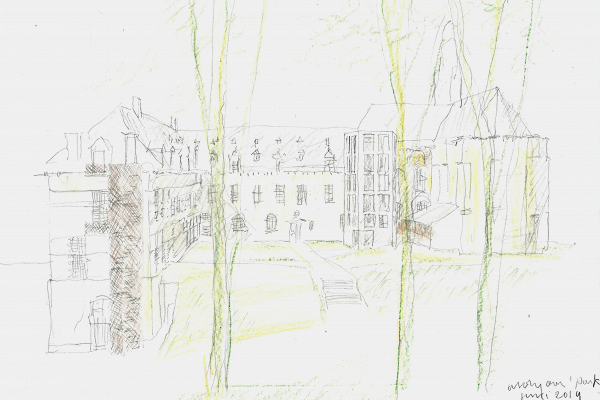 Park Abbey is a 12th-century heritage site that is undergoing a complete restoration by Studio Roma. For the design of the circulation within the abbey's eastern (and primarily public) wing, Studio Roma called on Robbrecht en Daem architecten. Within this design, two tower volumes with a pentagonal footprint were chosen as circulation cores. The larger tower in exposed concrete is part of the museum route, and the smaller tower in steel serves as emergency circulation for student accommodation.
In terms of both appearance and positioning, every effort was made to integrate the new volumes as subtly as possible into the special surroundings. The concrete tower building was emphatically placed with a point towards the historic building. This makes the addition seem almost detached from the façade. In this way, the new building leaves the historic façade intact. As a result of this positioning, views of highly valuable Romanesque façade elements - remnants of a 13th-century church - are afforded from the staircase of the tower volume.
In order to respect the privacy of the resident clergy, the staircase with its viewing possibilities is deliberately located in the northern part of the concrete tower volume, and the lift in the southern part. The tower volume conceals storage space, sanitary facilities and building services beneath it.
Tags
Heritage Restoration Tower Extension View Collaboration Circulation
Client
Stad Leuven Studiendienst Gebouwen
Architects
Studio Roma cvba, Robbrecht en Daem architecten
Program
Addition of vertical circulation for the east wing and an escape staircase for the infirmary
Location
Heverlee, Belgium
Date
2019–…
Status
Ongoing
Floor Surface
405 m2
Team
Paul Robbrecht, Hilde Daem, Johannes Robbrecht, Wim Voorspoels, Berst Schellekens, Isabelle Reford
Execution Architect
Studio Roma
Restoration
Studio Roma
Structural Engineering
BAS bvba
Services Engineering
Ingenium
Landscape
Ars Horti 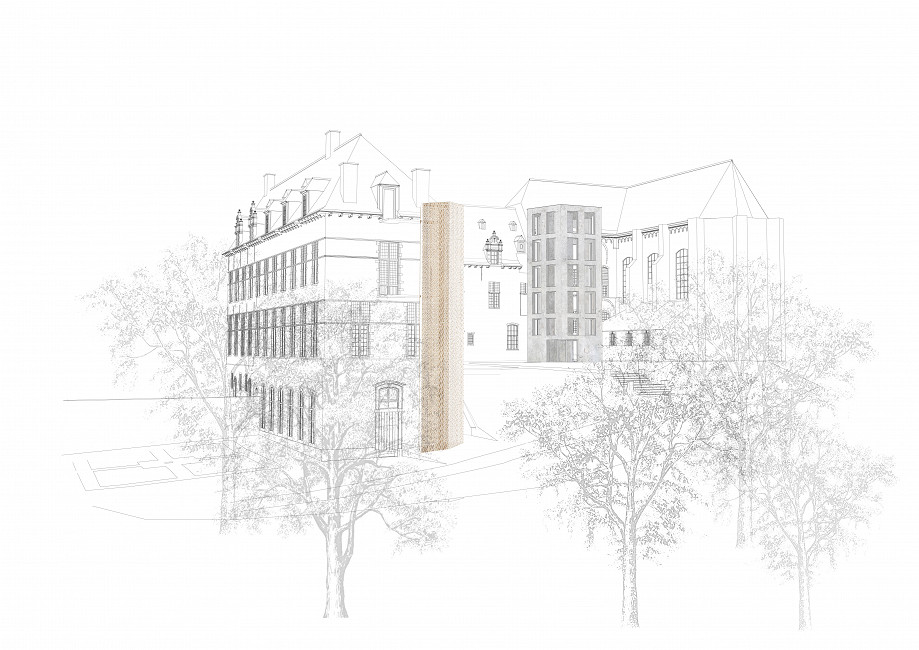 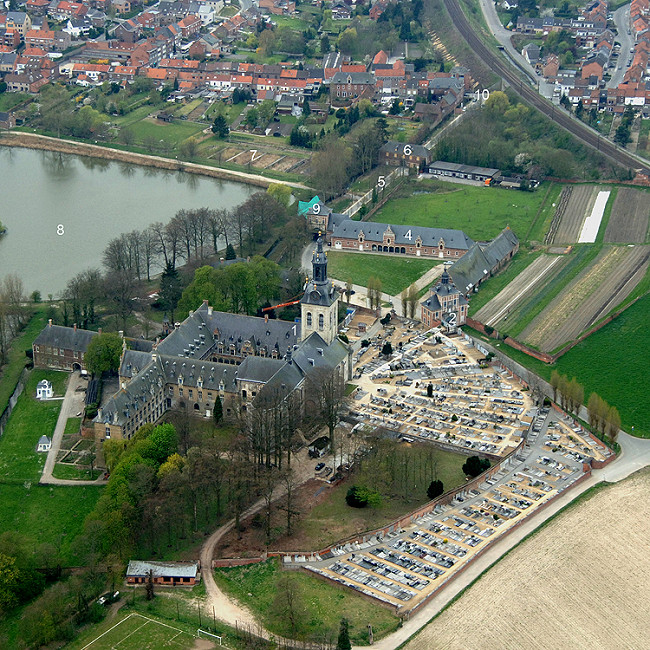 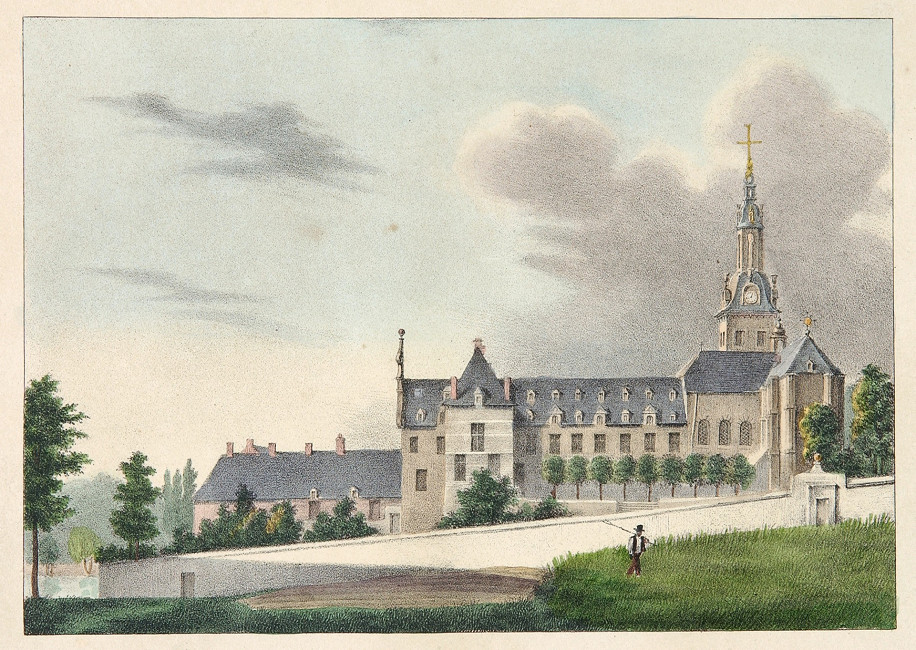 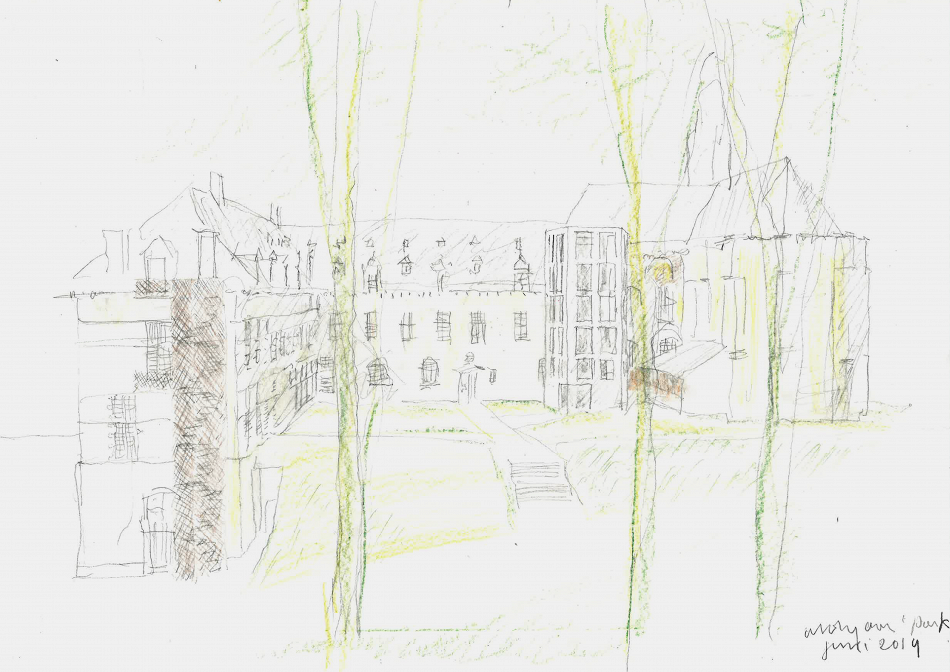 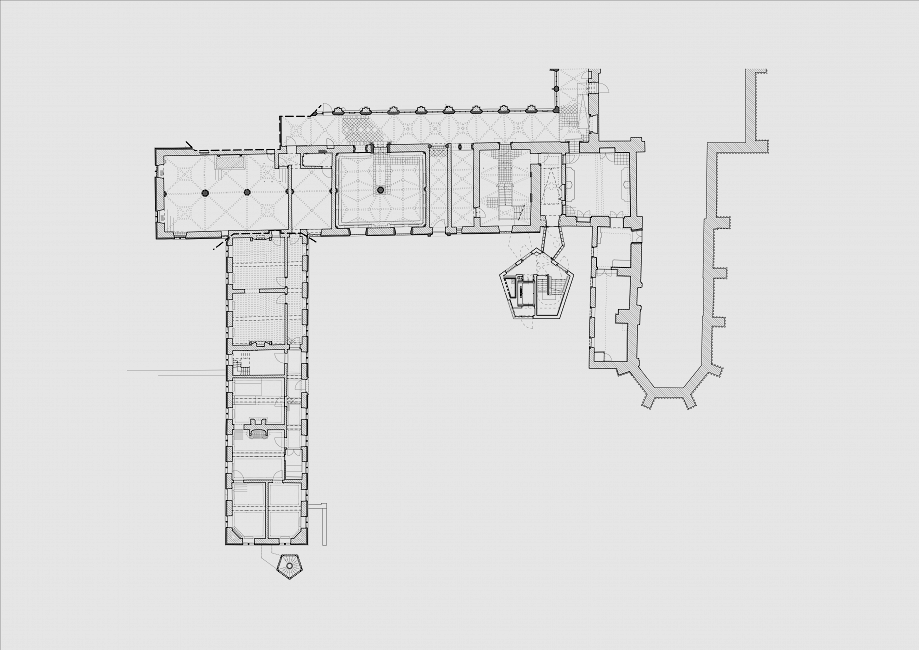 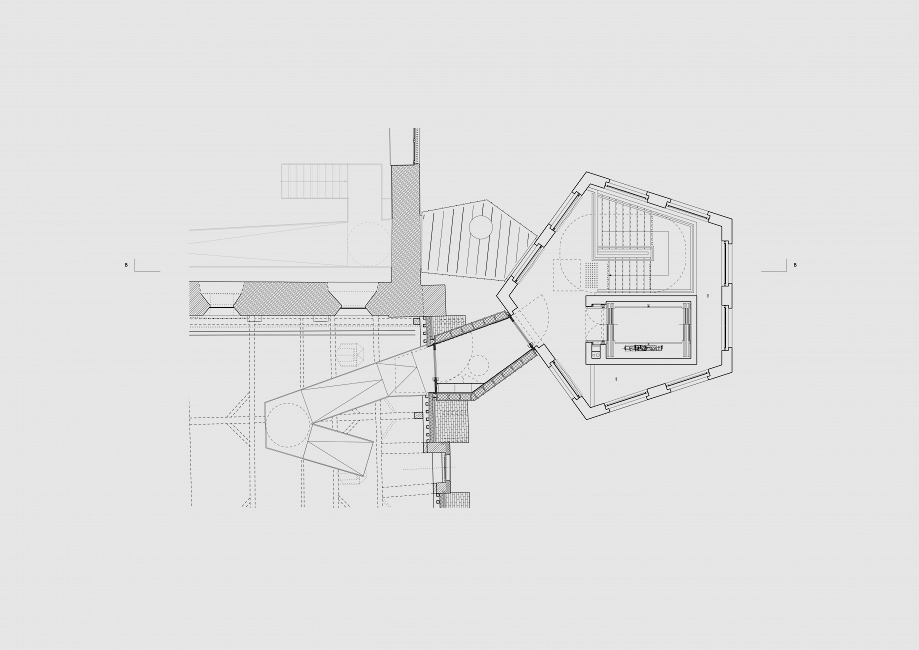 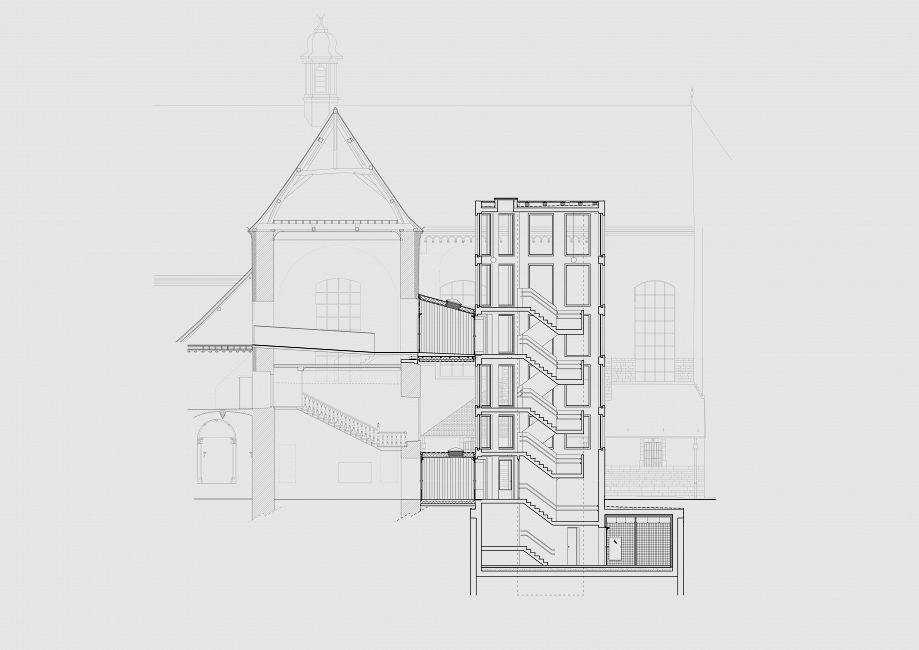 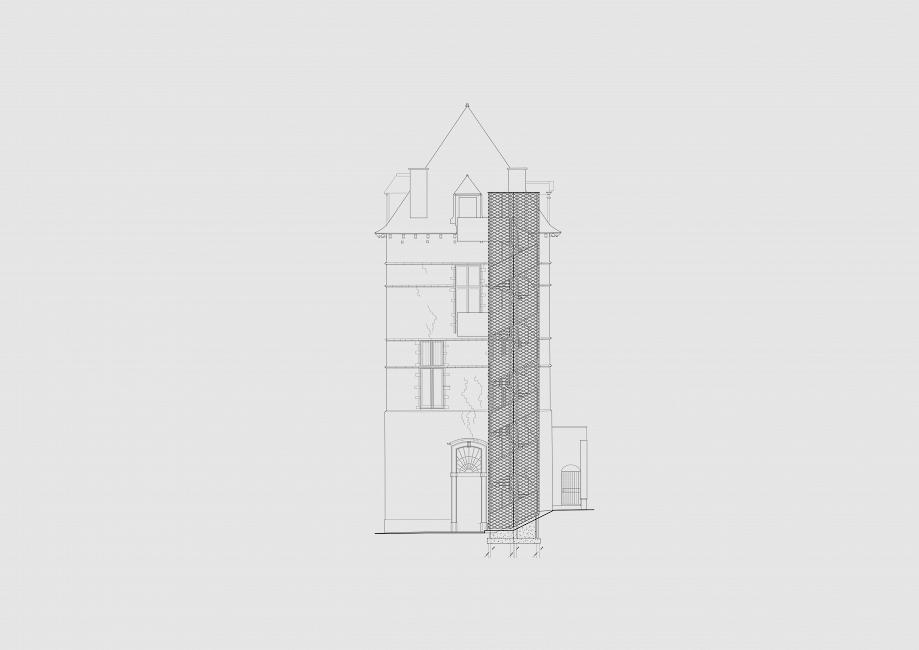 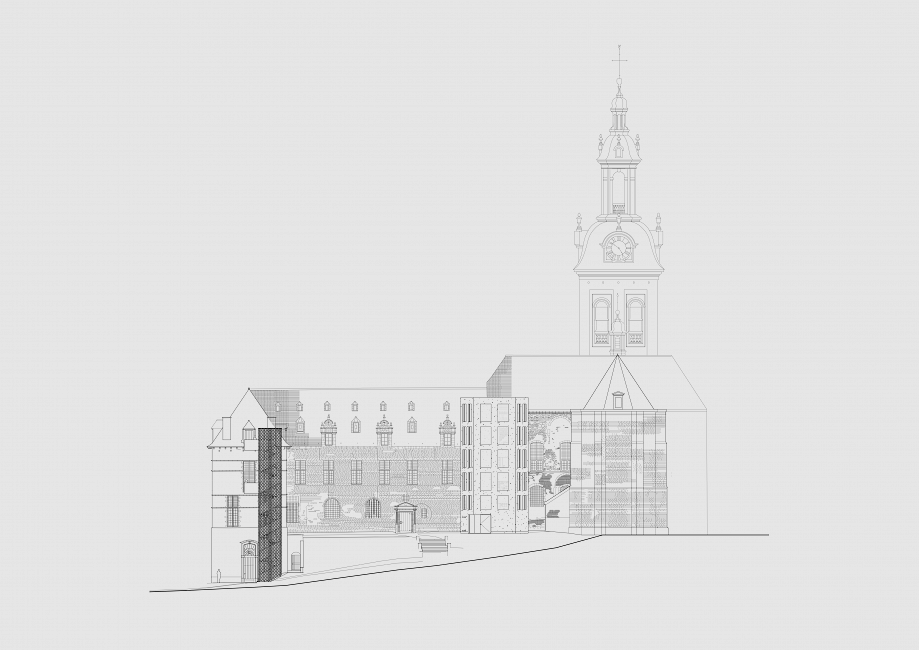 Zuidboulevard and Public Library
Waregem, Belgium
2012–2016
The reconstruction of the Zuidboulevard in Waregem ensures a thorough renovation of the city. The Zuidboulevard is the new gateway to the city and connects the cultural centre De Schakel, the city hall and the new library with each other. Instead of being a cul-de-sac, this renewed boulevard is a turning point, a climax for the previously interrupted loop for shopping, walking and cycling. This transforms the site into an easily navigable place... Read more
Campus of the Royal College of Art
London, United Kingdom
2016
The extension of the Royal College of Art at Battersea is a piece of art infrastructure. Free ‘platforms’ for creation allow current and future flexibility. As a terraced extension of the street an additional collective space – ‘the Stoa’, encourages interaction between staff, students and researchers. The hybrid nature of its design makes it the focal emblematic space the whole RCA community can associate with – a new identity... Read more
Mies van der Rohe 1:1 Model Golfclubhaus
Krefeld, Germany
2011–2013
In the summer of 2013 Robbrecht en Daem architecten realizes a temporary pavilion based on a competition design by Ludwig Mies van der Rohe from 1930. The design, a clubhouse for a golf course in the gently rolling countryside around the former industrial city of Krefeld, Germany, was never built at the time it was designed. Christiane Lange, art historian and curator for ProjektMIK, invited Robbrecht en Daem architecten to design an objet d'... Read more
Katoen Natie VA
Antwerp, Belgium
2017–2022
This corner building houses an exhibition and event space for Katoen Natie, combined with residential units above. The project is situated adjacent to the company headquarters. The headquarters - which consists of several former port warehouses - was previously renovated by Robbrecht en Daem architecten. The new project visually relates to it as a sort of continuation of the earlier work. The choice of a concrete façade and an aligned cornice... Read more
Concert Hall
Bruges, Belgium
1998–2002
On ‘t Zand, an open urban space near the station in Bruges, Robbrecht and Daem built a concert hall for Bruges when it was the Cultural Capital of Europe in 2002. Alongside the Halletoren, the Church of Our Lady and St Salvator’s Cathedral, this ‘Concertgebouw’ has become a landmark when driving into the city. A uniform external cladding in terracotta tiles hangs like dignified drapery over the volumes of the concert hall, fly tower and... Read more
Close
Filter by type
Filter by status
Filter by category
Filter by tag