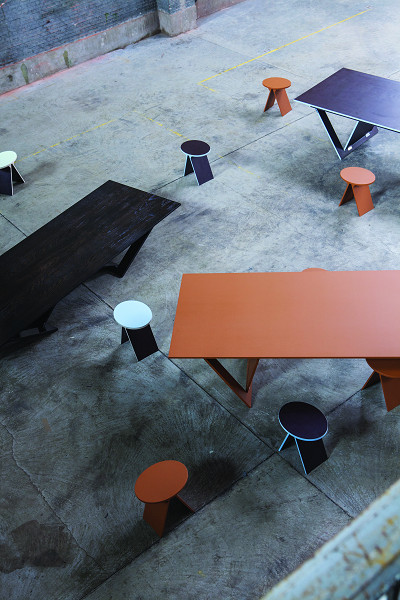 The foldable ‘Ta Tisch Table’ was originally designed for the architects’ travelling exhibition Pacing through Architecture (2012). Made for laying out the drawings, sketches and photographs of their projects, these pieces were constructed in birch plywood measuring 112cm by 303cm, resting on two elegant legs in the same material, which can be folded flat on hinges under the desk. The furniture touches the floor on two linear surfaces; the big plate seems to float rather than stand on legs. The table is of a solid construction, which is easily transportable because of the folding system. In 2015 valerie_objects, a furniture gallery from Antwerp, approached Robbrecht en Daem to develop the piece further. This collaboration resulted in two new versions with colour and a third constructed in French oak, stained dark brown and finished with high-gloss varnish.
Alongside the foldable table in the exhibition they also incorporated an adaptation of a stool first designed for Cinematek in Brussels (2003–2009). Built out of a folded steel leg and carrying oval seats stained in vivid colours, these small, playful objects are spread around Cinematek’s entrance hall. For the presentation of Pacing through Architecture in Johannesburg the piece was simplified to a plywood construction and was produced in situ; it was given the name ‘Joburg’. This, too, became a production in its own right, and various versions were made in different colours and finishings, as with ‘Ta Tisch Table’. Robbrecht en Daem have a very subtle, sensitive way of applying colour to both their architecture and their furniture.
Text by Aslı Çiçek – Original Publication: Aslı Çiçek, ‘Spaces for the Mind, Objects for Well-Being’, in Maarten Van Den Driessche, ed., ‘Robbrecht en Daem An Architectural Anthology’ (Ghent, 2017), pp. 481–484.
Tags
Objects Colour
Client
Valerie Objects
Architects
Robbrecht en Daem architecten
Program
Foldable table with stool
Location
Belgium
Date
2015
Status
Completed
Team
Paul Robbrecht, Hilde Daem, Johannes Robbrecht, Lara Kinds
Interior Architect
Robbrecht en Daem architecten 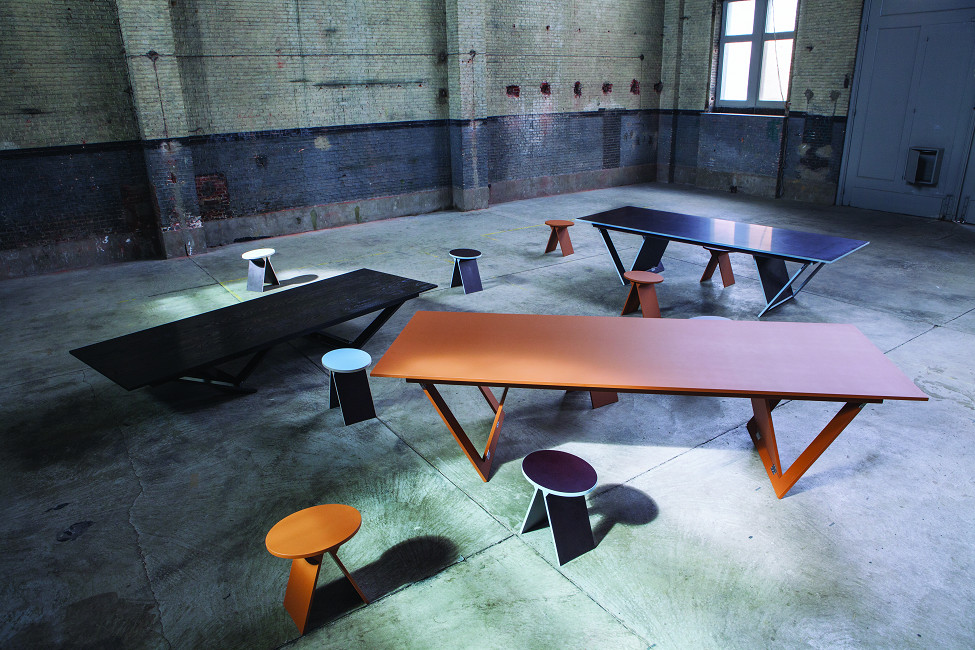 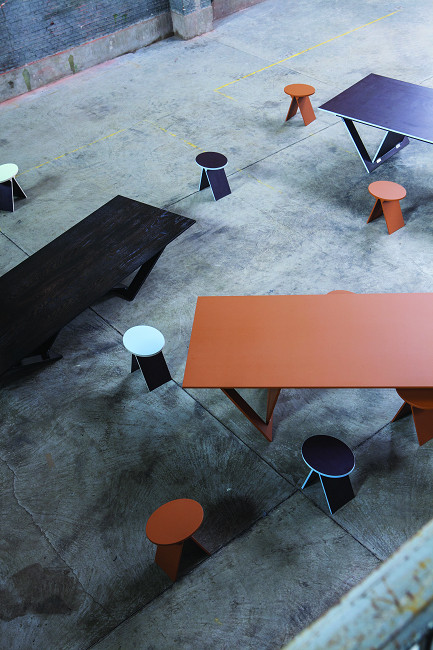 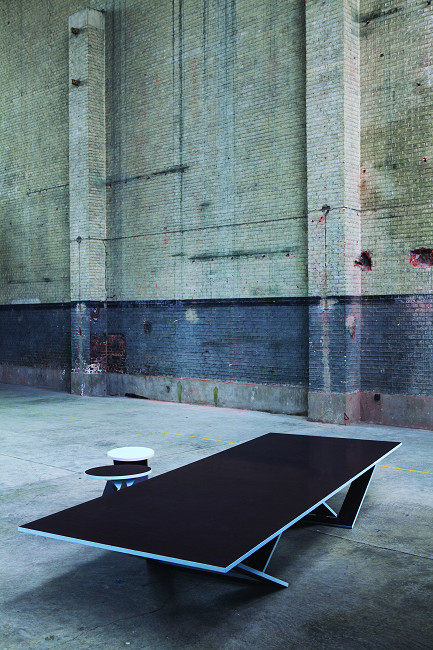 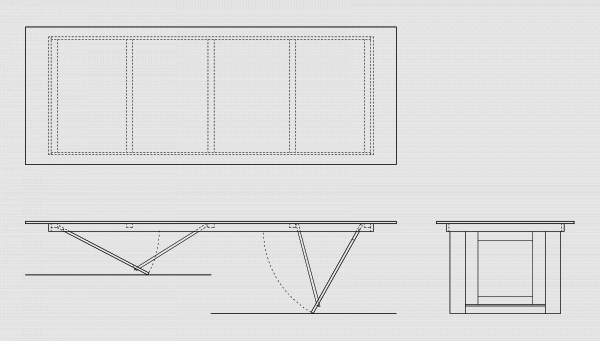 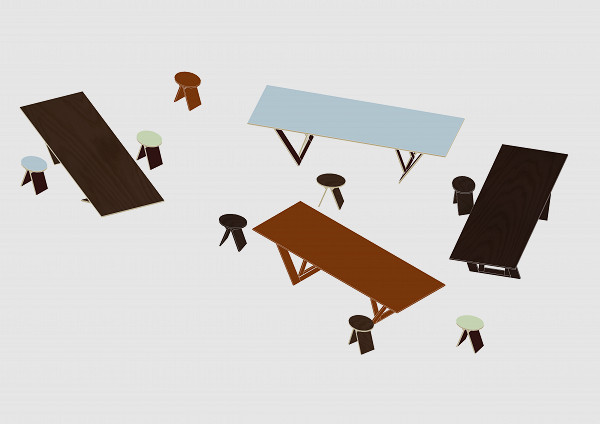 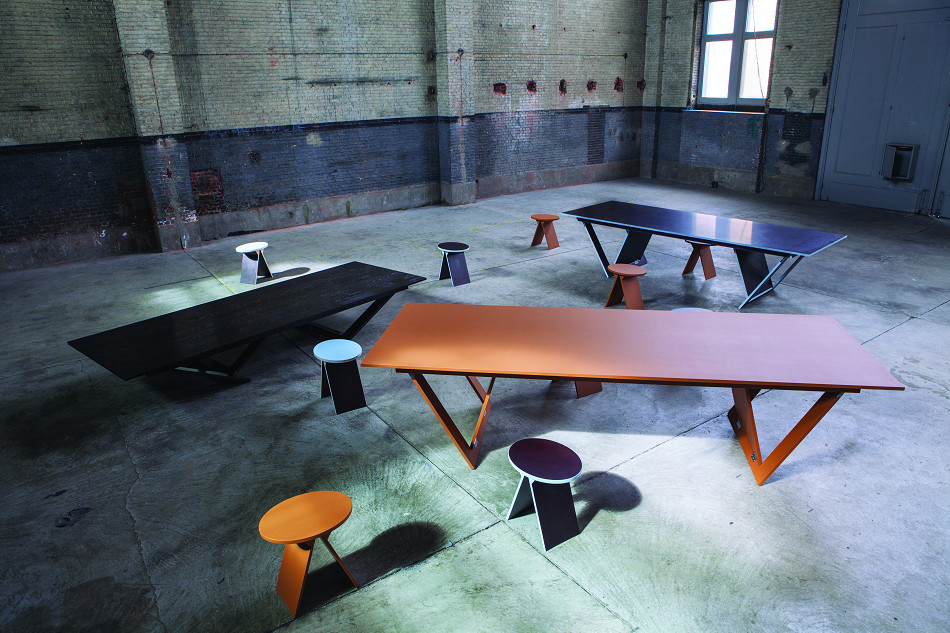 Spaces for the Mind, Objects for Well Being by Aslı Çiçek
Samuel Beckett’s second published novel, Murphy, opens with the eponymous protagonist having tied himself naked and with seven scarves to his rocking chair, swinging back and forth in the dark of his room. With this ritual Beckett’s well read, intellectual character retreats from everyday reality, relieves his body to set his mind free: ‘for it was not until his body is appeased that he could come alive in his mind’.2... Read more

Furniture KMSKA
Antwerp, Belgium
2007–2008
Refurbishment of the entrance hall and auditorium in the Royal Museum for Fine Arts Antwerp (KMSKA). This included the reception desk, benches, signalisation in the entrance hall, lectern, speaker’s desk and the separation wall in the auditorium.... Read more
Mobile Radio Studio for Klara Pompidou
Brussel, Belgium
2014
Mobile radio studio that was designed for the radio programme Pompidou and set up in various places in Brussels during the Klara Festival of 2014. The studio consists of four triptychs, a table and a projection standard. Due to the flexibility of the screens, the intimacy of the space and the program is determined. The design is supposed to stimulate a conversation that happens between a few people but can be heard by thousands who do not know... Read more
Ligeti Bench
Belgium
2002
The ‘Ligeti bench’, which was designed for the foyers of the Concert Hall in Bruges (1999– 2002), ranks as one of the most empathically coloured designs of Robbrecht en Daem. This piece derived from the idea of introducing lightness as a contrast to the rigid concrete interiors of the building. A low, deep bench was designed and painted in stripes, with a colour composition inspired by the precisely conceived Farbenklavier of Le Corbusier.... Read more
Richter Table
Belgium
1992
This desk was made as a birthday present in 1992 for the artist Gerhard Richter and was conceived with the idea of creating space in which for him to contemplate. Built out of cherry-wood with a linoleum desktop, the piece displays an elegant simplicity. Its trapezium, horizontal surface tilts slightly from the longer upper side towards the shorter front. Like old school desks the small table has storage under the horizontal surface, which... Read more
Close
Filter by type
Filter by status
Filter by category
Filter by tag