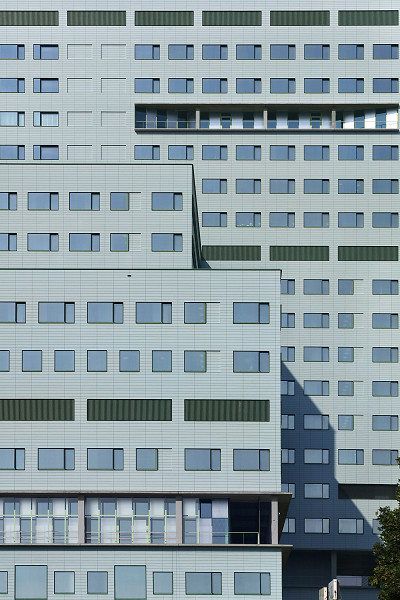 Situated at the head of Spoor Noord, the hospital is a hinge between the park, the docks and the city, and thus benefits from each of their qualities. The limited surface area of the site requires the hospital to be organised vertically. The hospital structure has a clearly discernible layered construction. All outpatient activities with consultation rooms, centres of knowledge and medical technical services are in the lowest section. The various nursing units are located in an L-shape at the top of the pedestal, above which is the administrative block. This entirety is bisected horizontally several times by interweaving the building with its surroundings. The hospital anchors itself in the urban fabric by releasing the entire ground floor as a public healthcare boulevard with a square function for pedestrians and cyclists. Motorised traffic (including ambulances) is handled entirely underground. The third level also belongs to the public, with a panorama floor and terrace offering a beautiful view of the city and port. The hospital forms a triptych in balance with the adjacent buildings, which are yet to be finalised.
Both in its vertical form, its plinth and its Health Centre programme, the project is characterised by a certain severity and urbanity. Anticipating this, a large degree of homeliness, comprehensibility and naturalness is introduced into the project. The most important elements for this are the strong presence of daylight, small and large interior gardens and outdoor spaces, despite the project’s dense urban location. The central concrete spiral staircase also provides an organic movement in the orthogonal volume. The organic aspect is both in appearance and functionality. The staircase is the meeting point of the four cardinal directions and entrances to the building. It connects all sides. Finally, there is the 'painterly' approach to architecture that the building takes through its colours: the blue and green as large ceramic colour areas, the ochre yellow in the lighting. For related to painting, architecture is in essence just as much a way of looking at the landscape and opening up perspectives.
Tags
Urban Tower Masterplan Office Restaurant Collaboration Infrastructure Colour
Client
Kairos – Euro Immo Star
Architects
Robbrecht en Daem architecten, VK Architects & Engineers
Program
Hospital with 361 beds, car park for 950 cars, retail
Location
Antwerp, Belgium
Date
2011–2022
Status
Completed
Floor Area
65.000 m2
Team
Paul Robbrecht, Hilde Daem, Johannes Robbrecht, Joris Van Huychem, Colm Mac Aoidh, Brecht Casier, Valerie De Ketelaere
Project Manager
VK Studio
Structural Engineering
VK Engineering
Services Engineering
VK Engineering
Acoustics
VK Engineering
Landscape
Robbrecht en Daem architecten
Procedure
Design, Build, Maintain
Contractor
Interbuild-MBG
Transport & Mobility
Omgeving 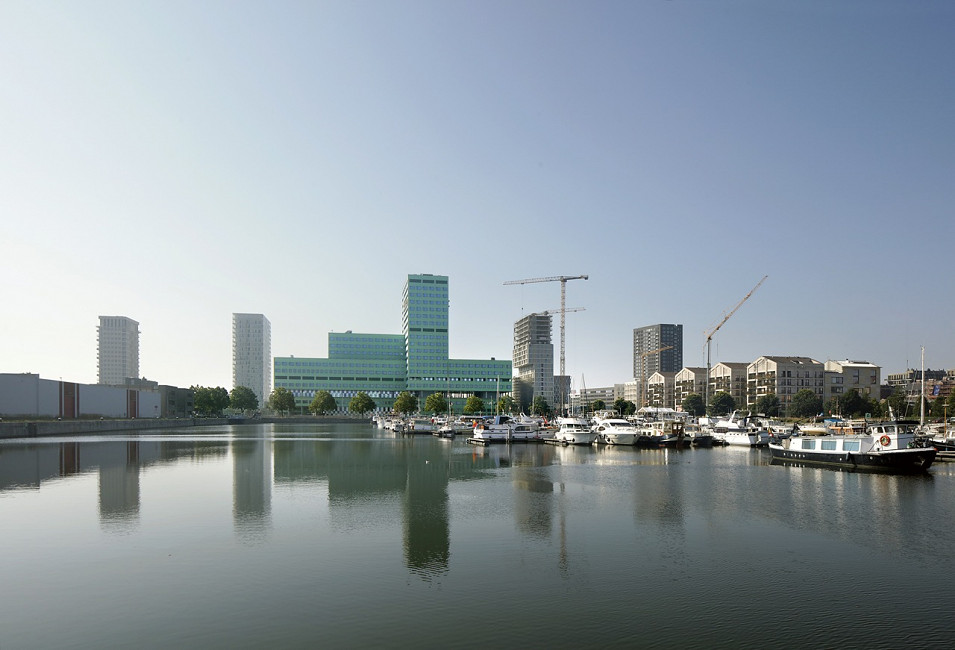 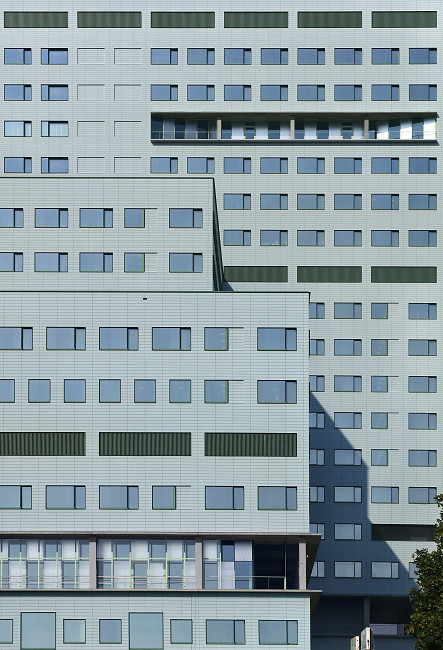 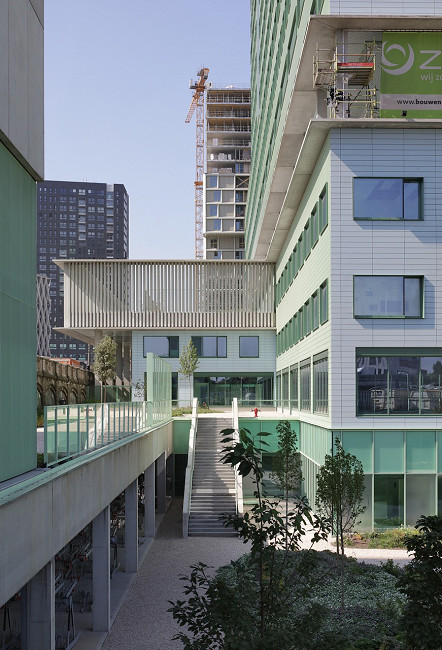 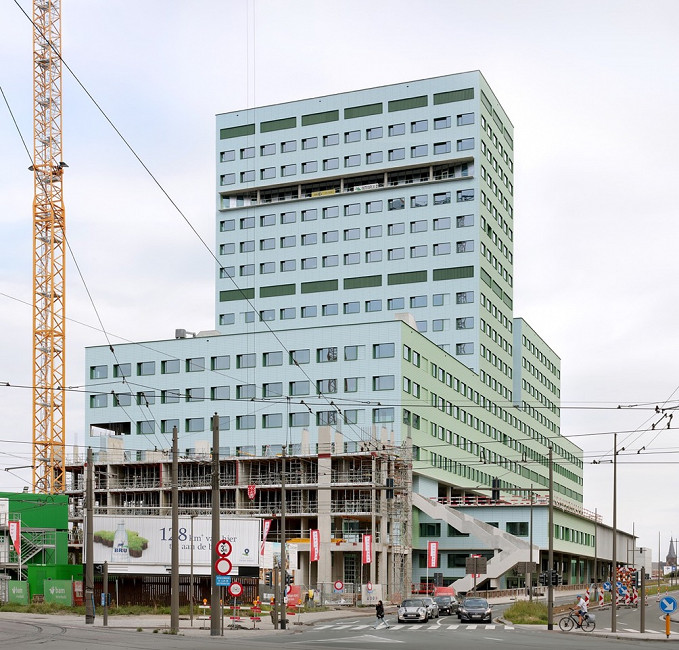 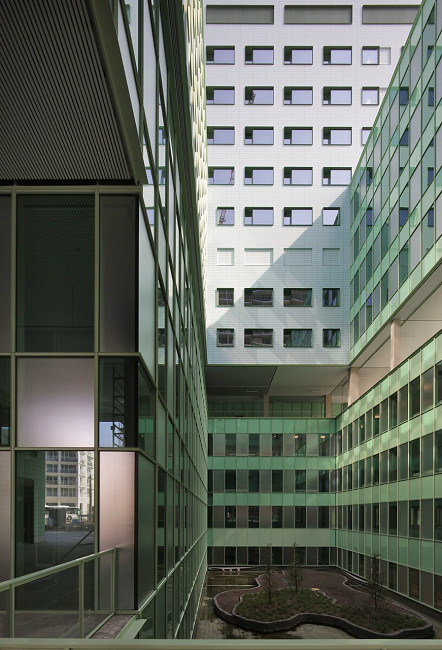 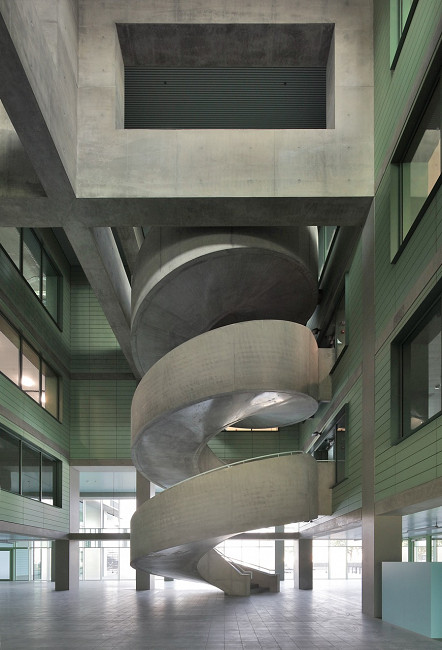 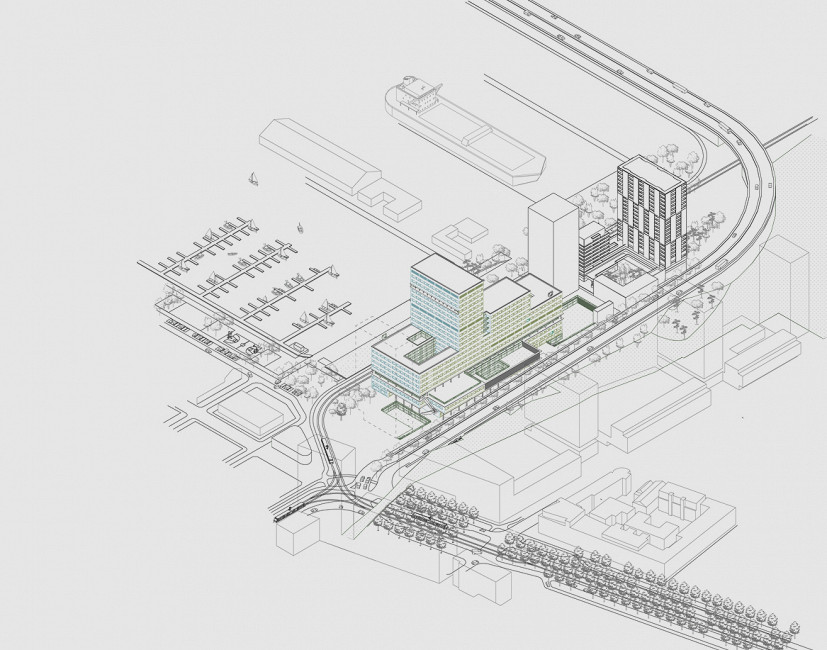 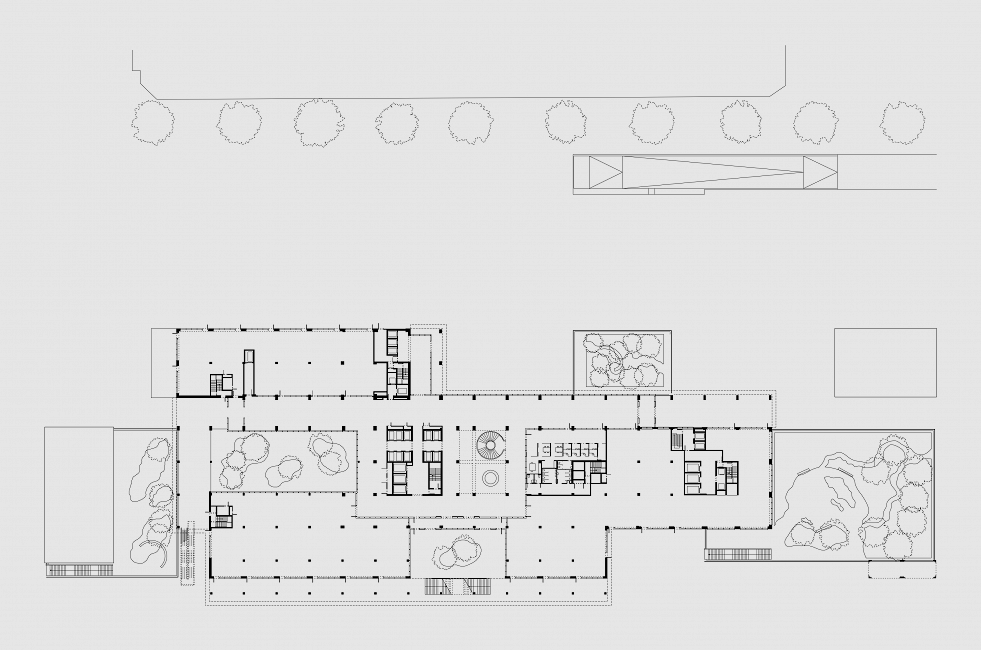 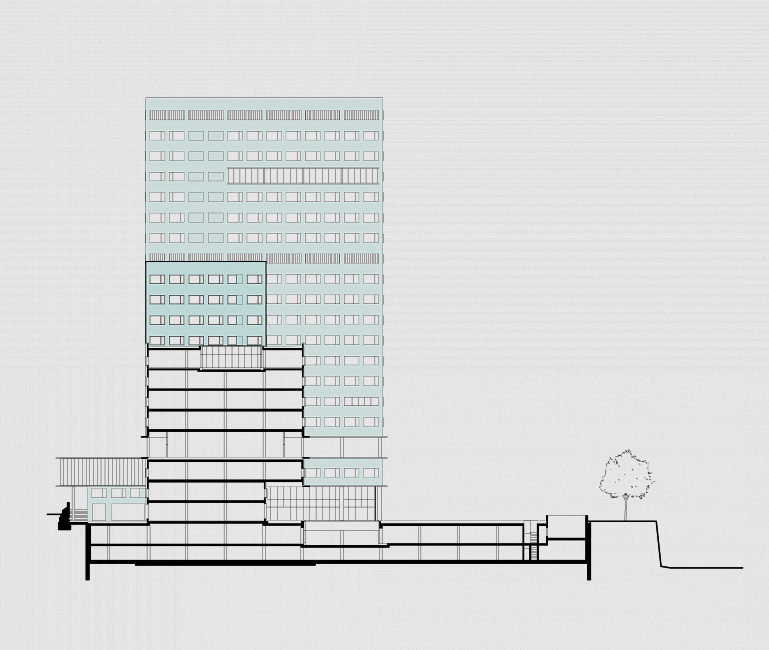 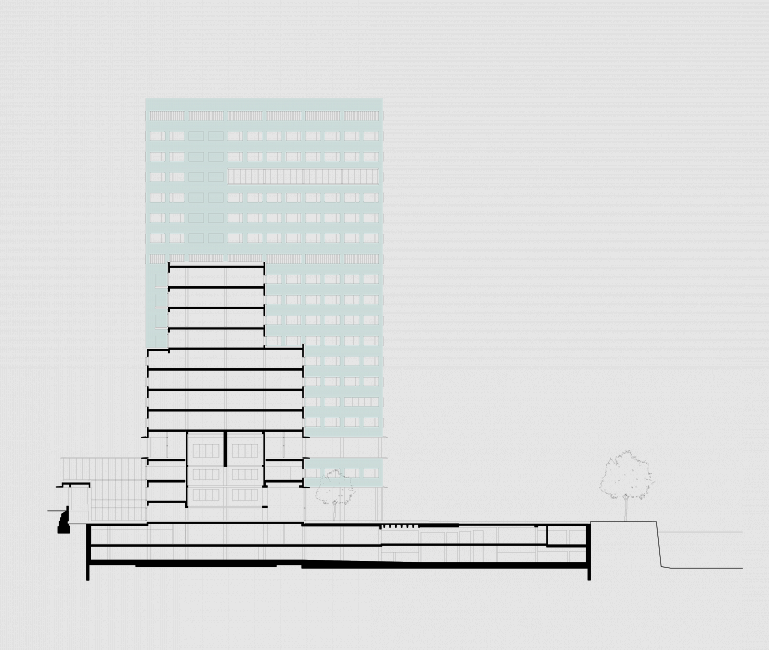 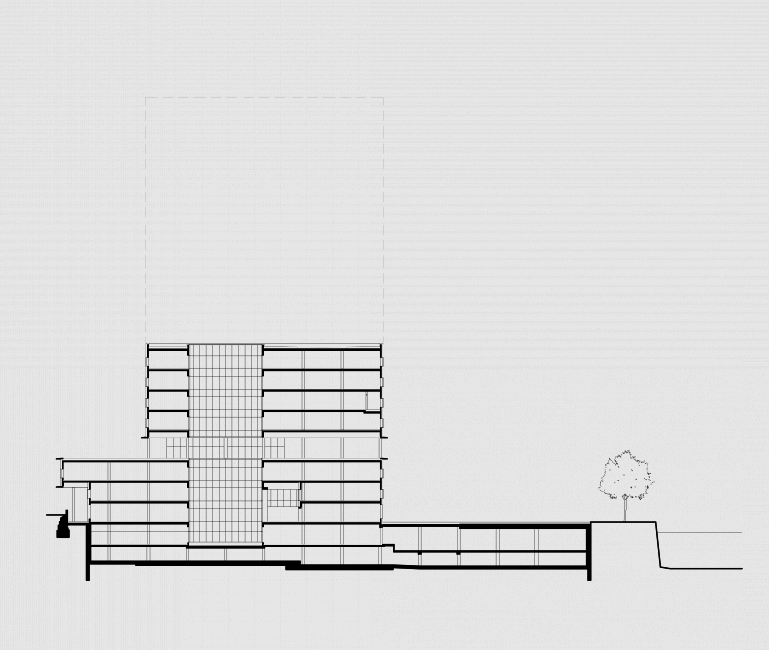 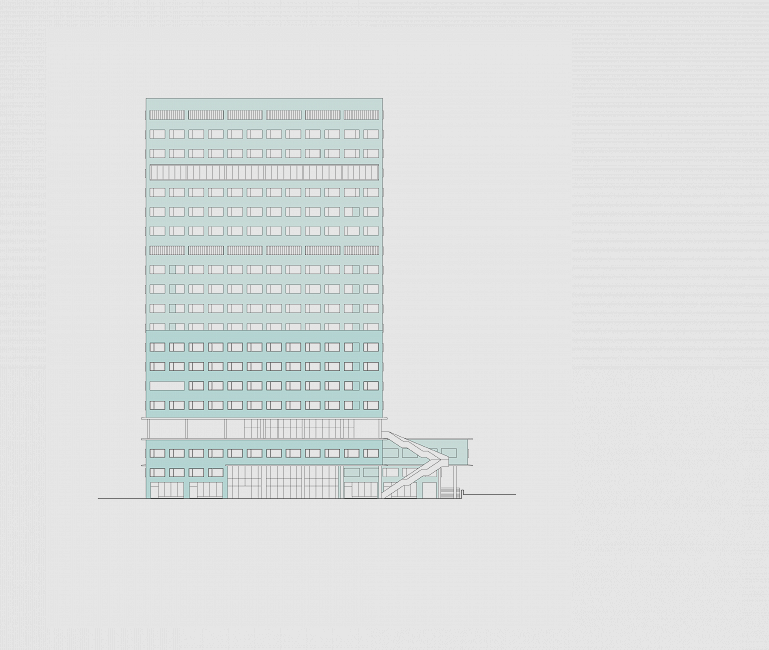 Jessa Hospital
Hasselt, Belgium
2020–…
Robbrecht en Daem architecten, together with Osar architects, has won the design competition for the Jessa Hospital in Hasselt, Belgium. The design is driven by a renewed search for the human scale of the hospital. In this search a contradictory question arises: how can a hospital with an immense surface area (135,000 m2) achieve the necessary small scale and humanity through its architecture? The response is not to put 'the patient' at its... Read more
Close
Filter by type
Filter by status
Filter by category
Filter by tag